How can we tell that a short-period binary is tidally locked?

Observationally, how can this be established?

What is known theoretically about the process?

Are there any reference papers to read?

The phenomenon of tidal locking occurs primarily in short period binary systems with convective envelopes. The tides raise bulges in the stars and these interact with convective motions to dissipate energy and to synchronise the orbital and rotational periods of stars and circularise their orbits. The process is much less efficient in stars with radiative envelopes.

How can we tell observationally? Well, we have to show that the rotation period of a star is the same as its orbital period. The orbital period is easily found, either by measuring eclipses, in the case of binary systems with a high inclination, or by measuring the motions of the star(s) using the doppler shift in their spectra.

Measuring rotation periods is also not so difficult. Fast-rotating stars with convective envelopes have magnetic activity and starspots (analogous to sunspots, but covering a larger area). As the star rotates then the light from the star goes up and down depending on what starspots are on the visible surface. This modulation gives the rotation period. In eclipsing binaries it can be difficult to separate out spots from eclipses, but here one can use the known orbital inclination and known radii of the stars to see whether their projected rotation velocities (measured from the widths of spectral absorption lines) matches the predictions from a tidally locked orbit.

There are many known tidally locked bnaries. Any low-mass binary with an orbital period of less than a few days is almost certainly tidally locked, but the situation at orbital periods greater than about about 6-8 days becomes more complicated (e.g. Meibom et al. 2006). The plot below is taken from a review by Mazeh (2008), showing the rotation vs orbital periods from some small, but well-defined samples. 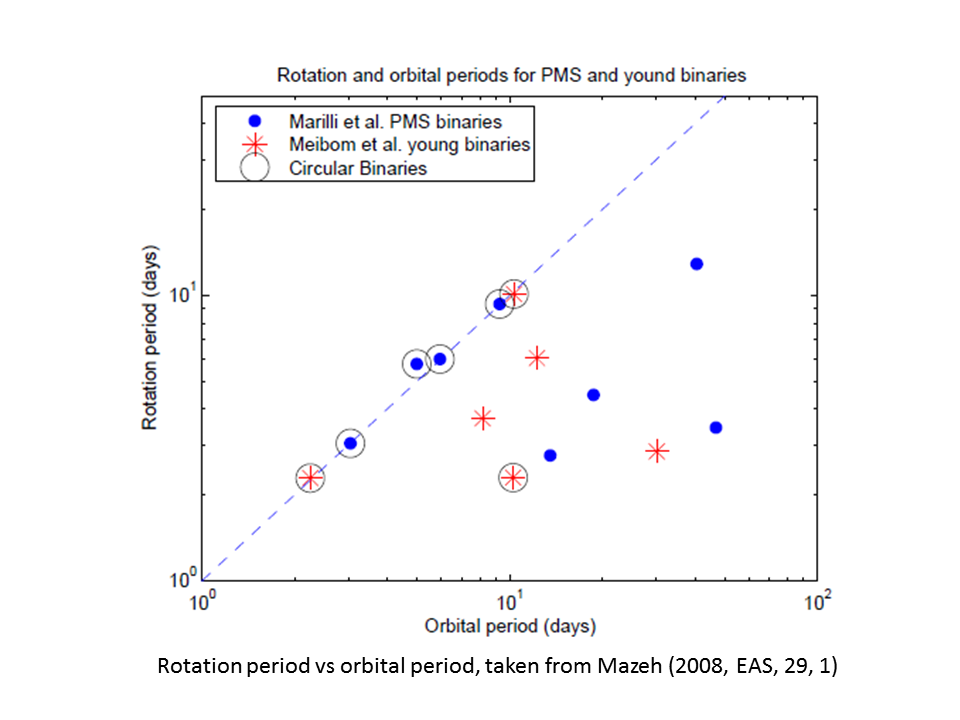 The absolutely classic, must-read, theoretical work on this is by Zahn (1989). The timescale for synchronisation depends on structural properties of the stars, their moments of inertia, the binary mass ratio and the ratio of their separation to their radii to the power of 6. It is this latter property that means tidal locking is nearly bimodal; binaries with periods shorter than some threshold (about 6 days) are usually tidally locked, but those with slightly longer periods almost never are.

Not the answer you're looking for? Browse other questions tagged binary-star tidal-forces or ask your own question.

8
When did the Moon become tidally locked to Earth?
2
can we see all binary stars as pairs?
2
Are there any known objects in a "dual" tidally locked orbit?
8
How long does an over contact binary star system last?
5
Terminology: Is there a name for the points on the surfaces of tidally locked parent/satellite bodies that always face each other?
2
Binary pairings that haven't been discovered yet?
28
How far apart are stars in a binary system?
2
Why do they think that WDJ0551+4135 is "snowman shaped" i.e. a contact binary?
4
Would a satellite that has a retrograde orbit and a shorter orbtial period than its planet's rotational period be tidally accelerated or decelerated?
3
How is phase defined in a binary orbit with eccentricity?