How long does it take Dawn to orbit Ceres?

I haven't been able to find the orbit time of Dawn around Ceres. Do you know how long it takes?

As of March 6, 2015, Dawn has entered orbit around Ceres. But it's really so far only "captured by Ceres' gravitational pull". Then, it was still 61,000 km from Ceres.

It's slowly spiraling down into an orbit that JPL's Dawn Journal calls "RC3", which will be 13,500 km above Ceres. This orbit will last 15 days per revolution.

It will take about 15 days to complete a single orbital revolution at this altitude.

The first news link above indicates that Dawn will reach RC3 on April 23, 2015.

This picture from the Dawn Journal gives us a picture of Dawn's path: it's not completing any revolutions around Ceres yet; it's still approaching the RC3 orbit as of this writing (March 10, 2015). 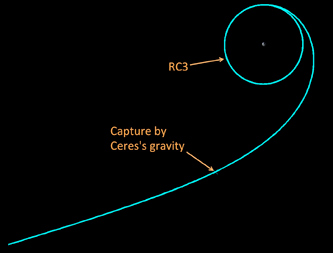 There are other orbital altitudes planned past RC3.

According to Dawn's schedule, the "survey orbit" will only last 22 days before it spirals in to the "high altitude mapping orbit" in August 2015, although it's unclear exactly when the "survey orbit" will take place. The "low altitude mapping orbit" will be in November 2015. In between orbits, when spiraling down to the next scheduled orbit, Dawn's orbital period will slowly decrease. At the last orbit, Dawn will be left in this orbit after its batteries and hydrazine fuel are exhausted.

Excerpt from latest news update from the Dawn mission (Sept 30, 2015):

Dawn is currently orbiting Ceres at an altitude of 915 miles (1,470 kilometers), and the spacecraft will image the entire surface of the dwarf planet up to six times in this phase of the mission. Each imaging cycle takes 11 days.

Starting in October and continuing into December, Dawn will descend to its lowest and final orbit, an altitude of 230 miles (375 kilometers). The spacecraft will continue imaging Ceres and taking other data at higher resolutions than ever before at this last orbit. It will remain operational at least through mid-2016.

Not the answer you're looking for? Browse other questions tagged orbit asteroids dwarf-planets space-probe ceres or ask your own question.

12
Can there be an object with planetary discriminant between Ceres and Neptune?
4
Capturing Ceres
3
How easy is it to mine water on Ceres?
3
Would I actually be able to see Ceres without shining a really bright torch onto it?
0
What is the percent flattening in Haumea?
3
How long does it take for an asteroid to get to Earth?