Statistics of elements abundance in exoplanets

Recently, I encountered the concept of carbon planets - planets, which would be, unlike the Earth, formed mostly by carbon, instead of oxygen, silicon and magnesium. (I am not counting iron, which is mostly locked in the core). Now, I am interested in the planetary chemical compositions in general. I found interesting articles investigating the topic of variance of the planetary chemical compositions (for example here or here), but it is quite hard for me to make an overall picture of the state in the field.

1. What typical compositions of terrestrial planets are expected to occur? (I guess there will be plenty of correlations, some groups of elements occuring together as they are bound, for example to the CNO cycle or other nuclear cycle.)

exoplanet terrestrial-planets
Share
Improve this question
edited May 2, 2019 at 3:22

The observational determination of the chemical abundances in exoplanets is in its infancy. In terms of terrestrial type planets, i.e. those of size less than a few Earth radii, the constraints are confined to comparing the measured densities (obtained from the masses and radii of transiting planets found by Kepler and CoRoT) with models of what planets with certain assumed composition would look like. An excellent recent example of this can be found in Dressing et al. (2015). In this paper they make the claim that all of the low-mass planets are consistent with a single, simple 2-component models (a mixture of 83% MgSiO$_3$ and 17% iron, but that this changes at higher masses, where more volatile elements or significant water are needed to explain their lower densities. The plot below, taken from that paper, illustrates the available data and should be quite up-to-date. Note how all the low-mass planets (and the Earth and Venus) can lie on the same family of models. 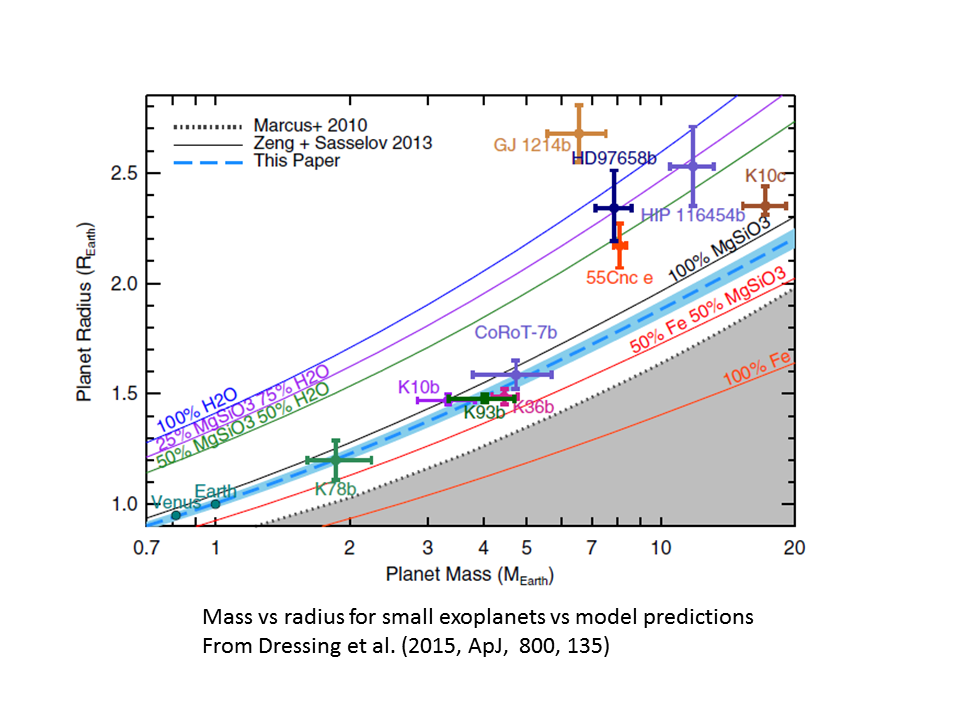 I don't think that the authors are claiming that this is exactly what all the planets are made of, but simply illustrating that at present there do not seem to be any large deviations from such a composition (for example, planets that are made solely of iron).

There are relatively few planets on this diagram, because it is difficult to obtain the masses of small transiting planets (it requires detection of the doppler shift caused by the pull of the planet on its host star).

Of course different models yield somewhat different results. For instance, Wagner et al. (2012) used the same data for Kepler-10b and CoRoT-7b and their own detailed models to argue that these planets have an iron core that makes up about 60% of the planet - i.e. a lot more than makes up the Earth.

At the moment the data for the lowest mass planets currently indicate that there could only be a limited amount of diversity. But the information that we are working with, the sample size, and the fact that only masses and radii are determined, is too sparse to be sure.

From a theoretical point of view there are many ideas. The basic concept about the formation of the terrestrial-type planets is that they form (relatively) close in to the parent star and have compositions that are reflective of what elements and minerals can condense out of the protoplanetary disk at high temperatures. This in turn depends on the balance of elements that are present in the protoplanetary disk, where in the disk the planet forms, the detailed structure of the protoplanetary disk, how it cools and how planets migrate in the disk. Unsurprisingly, by varying some of these conditions it is possible to create planets with a wide variety of compositions, which as I said above, appears to be mildly contradicted by the available evidence. At the most basic level we understand why the Earth and other terrestrial planets are comparatively lacking in "volatile" elements like hydrogen and helium (and to some extent C, N, O and noble gases), because they (or minerals containing them) could not condense at the high temperatures close to the proto-Sun.

Examples of these theoretical approaches can be found in Moriarty et al. (2014) (of which you are familiar), but also see Carter-Bond et al. (2012) for examples of how chemical diversity might arise. It seems that the Mg/Si and the C/O ratios have the biggest influence on the final compositions of the formed planets. A low C/O ratio favours the formation of silicates and fewer carbon-carrying compounds; but if there is more carbon than oxygen then it becomes more favourable to form carbon and silicon-carbide (I guess this is what you mean by "carbon planets"), but this also depends on the temperature in the region where the planet forms. For reference, the solar C/O ratio is 0.54 and the relative abundance of carbon in the Earth is much lower (than in the Sun) but the C/O ratio measured in other stars can be higher.

You may have a hard time finding definitive answers to these questions. I'm after the same answers and hope this will contribute as a starting point to something more specific and comprehensive .

Generally the abundance of elements appears to be closely related to their mass. In effect the heavier the element the more scarce it will be. This is due to the greatly increasing amount of energy needed for the fusion process to occur as you progress towards the heavier elements in the periodic table.

Elements heavier than Fe (Iron) are said to require an event such as a supernova explosion to form (or an environment with similar temperatures), which would occur once the star burns through its silicon fuel and collapses generating enough energy for the subsequent fusion reactions.

This video describes the process

Without going into compositions of elements you could probably start with the relative abundance of individual elements to determine the odds of them existing on any given planet and from there get into the forms/chemical compositions they would form in the planet's crust and atmosphere.

This is a graph from wikipedia showing the relative abundance of elements based on spectroscopy (based on emission and absorption spectra of the elements) measurements.

Not the answer you're looking for? Browse other questions tagged exoplanet terrestrial-planets .