Is it possible that the Sun has a binary partner (the Nemesis Theory) that has eluded detection? [duplicate]

I just recently learned about the theory that our Sun has a small companion star with a 26 million year orbit. This theory came about when it was realized that mass extinction events happened approximately every 26 million years. My question is not whether or not this is possible as that has been asked before; my question is how could we have missed it?

When we look for exoplanets in the Universe, we are sometimes able to detect a slight wobble in the parent stars. Along those lines, if the Sun had a companion star, how would we not notice the effects on its rotation/orbit? If the sun and this companion star were locked in a 26 million year orbit, would we be able to notice the orbit?

Finally, when you have a star system like ours, with so many planets, is it possible to tell which planet is causing which specific motion in the Sun? For example, let's say we traveled to a different star system a few hundred light years away, and we were studying our solar system. Would we be able to look at the way the Sun wobbles and determine how many planets were in orbit around our Sun, or would we only be able to say that there was one, or simply that there may be several? I guess, the root question is how accurately can we judge the contents of a star system based on the perturbations in the star's orbit? Thank you kindly for your time.

The first part of your question has been asked before: Is Sun a part of a binary system? and the current (lack of) evidence for such a companion is discussed on the relevant wikipedia page about "Nemesis".

To summarise: if it were a small companion star, or even a brown dwarf that had been cooling for 4.5 billion years and it had a 26 million year orbit, then Kepler's third law tells us how far away that object would be. It turns out that this is not far enough away that the object would have eluded detection in all-sky surveys. The recent WISE survey in the near-infrared should have been capable of detecting even a very cool brown dwarf (and indeed it has detected some very cool brown dwarfs, just not that close to the Sun - e.g. a 250K brown dwarf only 6 light years away Luhman et al. 2014) that was close enough to the Sun to be a Nemesis candidate.

Since the details do not appear to be on the wikipedia page, I'll fill some in. If we take a very low mass brown dwarf - say 20 Jupiter masses - in a 26 million year orbit, then Kepler's 3rd law tells us this will be about 90,000 au (1.4 light years) from the Sun (assuming a circular orbit). According to the evolutionary models of Saumon & Marley (2008), such an object has an intrinsic luminosity of $10^{-7}$ times (1 ten millionth) that of the Sun and a temperature of 400 Kelvin and would appear to have a spectral type of late T or early Y.

From the calibration of absolute magnitudes versus spectral type for cool brown dwarfs in Marsh et al. (2013) we know that at 90,000 au, such a brown dwarf would have magnitudes of $H=14$ and $W2=8$. The former is bright enough to have been seen in the 2MASS all-sky survey and the latter is easily detected by WISE. The combination of data would also easily have revealed the large parallax of such an object. We can conclude that an object would have to have much lower mass than this to remain undetected.

Now the middle part of your question: A star will "wobble" in response to its companion with exactly the same period as the orbit. So, if you are prepared to wait for an appreciable fraction of 26 million years, then yes, the presence of the binary companion might be revealed in a net small oscillation of average proper motions over the whole sky, with a period of 26 million years! Otherwise not. Measuring the "wobble" by doppler methods is currently capable of detecting Jupiter-mass objects in orbital periods of 10-20 years. Measuring the wobble "astrometrically" - that is measuring the position displacement of the star due to an unseen companion is more sensitive to distant companions, but still, one is limited by the fact that the wobble period will be the same as the orbital period of the companion. An assessment of the performance of the Gaia astrometry satellite by Perryman et al. (2014) suggests detection of planets with orbital periods out to 10 years might be possible.

For the final part of the question - yes, the motion/wobble of a star can be decomposed (using Fourier techniques) into components that are due to each planet. There are numerous examples of multiple planetary systems that have been discovered by the radial velocity technique in this manner. Similar techniques can and will be employed to analyse any astrometric wobble. An interesting plot is to show the motion of the Sun in the plane of our solar system, in the rest frame of the solar system centre of mass. The Sun executes a complicated trajectory in this plot due primarily to the influence of Jupiter (on an 11 year orbit), but with superimposed "epicycles" due to the influence of the smaller planets on different orbital periods. See below.

Motion of the Sun around the solar system centre of mass (from http://commons.wikimedia.org/wiki/File:Solar_system_barycenter.svg ) 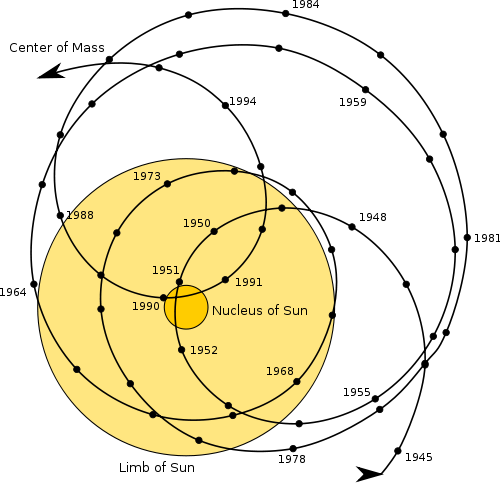 Revised:
There are several reasons why the sun cannot be part of a binary system (even if the orbit is 26 million years).

If the star has the mass of Sol, the binary system would orbit around the point equal distant from both masses. This would definitely show a change in parallax for some of the stars.

A Sol size star in a 26 million year orbit (about 3.5 ly) would have been noticed. It would have an apparent magnitude of -0.01. At this distance, the star would be influenced (by gravity) from our neighbouring stars and would probably separate into its own system.

The greatest mass that would not become a star would be less than 1/10 solar masses, which would have an orbital radius of less than 1.43 ly (90600 AU). The center of mass would be over 9000 AU from the sun.

Since the Oort Cloud extends beyond 2 ly (Wikipedia states 3 ly), a Jupiter size object would probably have cleared an area around its orbit of other objects.

Not the answer you're looking for? Browse other questions tagged the-sun orbit exoplanet nemesis or ask your own question.

19
Is Sun a part of a binary system?
1
Could there be a closer star to Earth than the Alpha Centauri triple star system, excluding the Sun?
1
Could there be a brown dwarf in our solar system?
19
How do we know Nemesis is not a black hole (or neutron star)?
18
What are the current observational constraints on the existence of Nemesis?
5
Could the barycenter orbit of our sun be greatly underestimated?
4
We are sure that there are no brown dwarfs closer than ______
5
Does our sun/solar system orbit around any other celestial objects?
3
Can we draw a min(distance) and max(mass) relation based on current observation data of nearby astronomical objects within several parcsecs?
1
Axial wobble or binary star system
See more linked questions

18
What are the current observational constraints on the existence of Nemesis?
14
Is the Jupiter-Sun system considered a binary system of some type?
12
What mechanism causes oscillations of the solar system's orbit about the galactic plane?
5
How can we tell how many exoplanets a star has?
27
Is it odd that our Sun has so many planets?
85
How can there be 1,000 stellar ancestors before our Sun?
4
Detecting habitable planets
2
'Geocentric' view of orbits
1
What would be the year length of a habitable planet of 40 Eridani A?