How does one determine the effective temperature of a star from its spectrum?

From the other hand, temperatures and magnitudes are the most important quantities, characterising stars.

Note: This a rather textbook question. I created it because I have encountered a good existing answer by @Carl, previously posted in a bit less textbook discussion How well can we in principle determine $T_{\textrm{eff}}$ of a star? . This question seems to be a much better place for the answer.

Temperature ($T_{eff}$) can be quite tricky to determine accurately as it interrelates to a number of other fundamental measurements.

Firstly, remember that the spectrum we observe from stars are pin-point, they give us the entire overall result and not a specific location or part of the star. We need to dissect the various parts to arrive at the fundamental parameters. We arrive at our results by iterating the values of the fundamental parameters until a model spectrum matches the true spectrum we observe. The issue is, like you say, the existence of a whole lot of uncertainties.

The first of these (although it doesn't have a large effect) is the Uncertainty Principle itself. This creates natural line broadening due to the emitted photon having a range of frequencies. The width of the line is determined by;

where $\Delta E$ is the uncertainty in the energy, $h$ is the Planck constant, and $T_{\text{decay}}$ is the amount of time the electron stays in a high energy state before decaying.

The rotation of the star causes a Doppler shift effect on the line spectra making it broaden. The faster the rotation, the broader (yet smaller) the line. Like the Uncertainty Principle, this is natural broadening as it doesn't impact the abundance of any particular element in the star.

Measuring the rotational velocity ($V_{\text{proj}}$) depends on both its axis of rotation and our line of sight to the star. Therefore, we use a combination of both velocity about the equator ($v_e$) and the star’s polar inclination ($i$) to determine the projected radial velocity;

Temperature ($T_{eff}$)impacts wavelength in such a way that higher temperatures impart higher random motions on the atoms. When these photons collide with an atom, they can cause the atom to become ionised, i.e. lose an electron. Different energy levels (and therefore temperature) will create different abundances at the various ionisation stages of atoms. 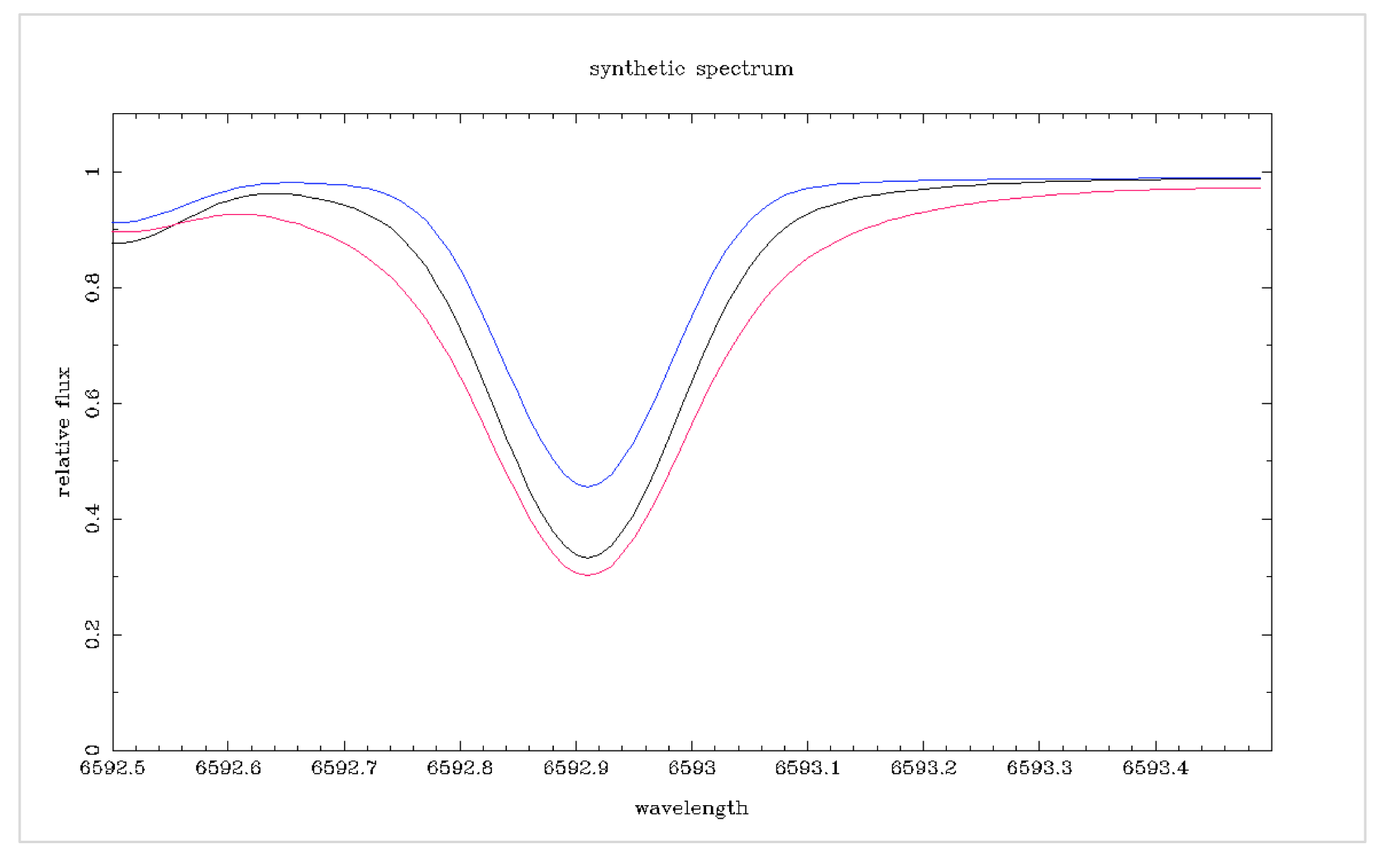 Microturbulence ($v_{\text{mic}}$) is the non-thermal localised random motion of the stellar atmosphere. It works in a similar way to temperature - an increase in the motion of atoms creates a wider range of wavelengths observed and therefore broader line profiles.

In strong lines, saturation can occur when there aren’t any more photons to be absorbed. As microturbulence in these areas increases, it presents more opportunities for photons to be absorbed. This broadens the wings of the line profile increasing the overall strength of the line. We can use this fact to determine $v_{\text{mic}}$, by ensuring that the strength of the lines (equivalent width) have no correlation with their abundances.

Finally, surface gravity which is a function of the star’s mass and size:

A star with a higher mass but smaller radius will invariably be denser and under greater pressure. By definition, denser gas has a higher number of atoms per unit of area (abundance), leading to stronger spectral lines.

A gas under pressure provides more opportunities for free electrons to recombine with ionised atoms. For a given temperature, ionisation is expected to decrease with an increase of surface gravity, in turn increasing the abundance of atoms in the neutral or low ionisation states.

As we've seen, there are a number of ways in which a spectrum of a star can be altered. The one you're interested in is temperature. As temperature is interrelated to all the other fundamental parameters, we need to treat them together as a whole and tease out the value of $T_{eff}$.

We begin with a synthetic spectrum and modify its properties iteratively until it matches the shape of the star’s spectrum. Adjustments of one parameter will invariably affect the others. The spectra will match when the temperature, surface gravity, and microturbulence values (amongst others) are correct. This is obviously very time consuming although programs exist to help.

Atmospheric properties can also be determined by other less time consuming means. Photometric colours can be used as a proxy for temperature, and absolute magnitudes for surface gravity. However, these determinations can suffer from inaccuracies due to interstellar extinction and are at best a close approximation.

There are many different ways to measure temperature of an astronomical object. Typically, effective temperature means just simply a blackbody temperature. However, the blackbody model is just the first-order approximation that we know it is inaccurate in many circumstances.

If you have a nice spectrum from a wide wavelength, your effective temperature might be better to be defined as the excitation temperature. However, what definition you should use really depends on what context you are in. Check this for a short summary: https://www.physics.byu.edu/faculty/christensen/Physics%20427/FTI/Measures%20of%20Temperature.htm

Not the answer you're looking for? Browse other questions tagged spectroscopy stellar-atmospheres radiative-transfer or ask your own question.

0
How to calculate the temperature of a star

8
How well can we in principle determine $T_{\textrm{eff}}$ of a star?
1
How can I determine line luminosities from equivalent width measurements?
1
What's the differences between one-dimensional spectrum and two-dimensional spectrum?
2
What equipment do I need to measure the spectrum of a star?
4
How to model and subtract nebular emission lines from stellar spectrum
2
How spectrographs that measure radial velocities manage to translate variations in the stars' spectrum lines into the "speed" of the star?
3
How does a cross dispersed spectrum look like in a reality (from echelle spectrographs)?
6
Why does Earth have a dip in the CO2 absortion spectrum from 14 to 16 micron?
2
How would one estimate the rotation period of a star from its spectrum?