I got from this answer that the axis of the solar system is tilted of about 63 degrees in relation to that of our galaxy, so I can assume that we move through space (at least locally) roughly in a direction that is 63° tilted in relation to our solar system's plane, is that correct?

I think your question is answered by the duplicate mentioned: but here are the relevant highlights.

Humphreys & Larsen (1995) suggest, using star count information, a distance of $20.5 \pm 3.5$ pc above the Galactic plane; consistent with, but more precise than the Bahcall paper referred to by Schleis. Joshi (2007) is more guarded, investigating some systematic uncertainties in the estimation techniques and ends up with distances between 13 and 20 pc above the plane.

The Sun executes oscillations around its mean orbit in the Galaxy, periodically crossing the Galactic plane. I borrowed this illustration (not to scale!) from http://www.visioninconsciousness.org/Science_B08.htm to show this oscillatory motion. The oscillations will not be exactly sinusoidal because the restoring force towards the plane does not very linearly with height above the plane. As the Sun is currently above the plane and moving upwards, and each cycle takes about 70 million years with an amplitude of 100pc (Matese et al. 1995), it will be roughly 30 million years before we cross the plane again.

EDIT: Actually I'm glad I revisited this question because I think the picture is not very good at all. As the Sun takes ~230 million years to go around the Gaaxy, it should only execute 3 complete vertical oscillations in our Galactic year, whereas the picture implies many more. Secondly, the Sun executes a radial oscillation with a period of around 160 million years, which is not even indicated! 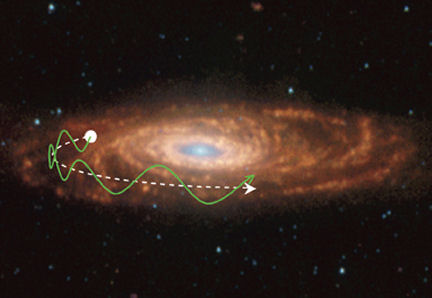 Yes indeed, the Sun (and other stars) has an oscillatory velocity perpendicular to the galactic plane. According to this Nature article, the Sun crosses the galactic plane roughly every 30 million years, reaching a max height of 150-300 lightyears.

Depending on how you measure it, a more recent analysis by Joshi (2007) finds that we are currently somewhere between 20 and 90 lightyears above the plane.

Not the answer you're looking for? Browse other questions tagged solar-system galaxy galactic-dynamics .

42
Why is our solar system "tipped" about 63° with respect to the plane of our galaxy?
28
How far is the Earth/Sun above/below the galactic plane, and is it heading toward/away from it?
2
Direction of Earth’s poles relative to the Sun’s movement around the Galaxy