How did water get on Earth

I recently read that water more than likely got here by comets (carrying water) hitting the Earth. However it also it says the impact of a comet hitting the Earth is much greater than an atomic bomb. So if comets brought water to Earth how was it not vaporized when the comet hit the atmosphere or in the massive explosion when it hit the Earth itself?

The key finding why we think Earth's water came from Asteroids (big rocks) and not Comets (small rocks) is the Deuterium/Hydrogen ratio that we can measure in several sources.
When a star forms, it has an initial value of D/H that came from the nucleosynthesis in its progenitor nebular / star.

In a protoplanetary disc, as dust grows to rocks grow to planets your nebular gas will be trapped with initial D/H ratios in gas giant atmospheres. But the way to get Water onto Asteroids and Comets (those don't have substantial mass to retain atmospheres themselves!) is sublimation and maybe adsorption.
The latter two processes are strongly sensitive to the gas-mass and therefore different D/H ratios from the protosolar ones are expected. And in fact we find them to be different: 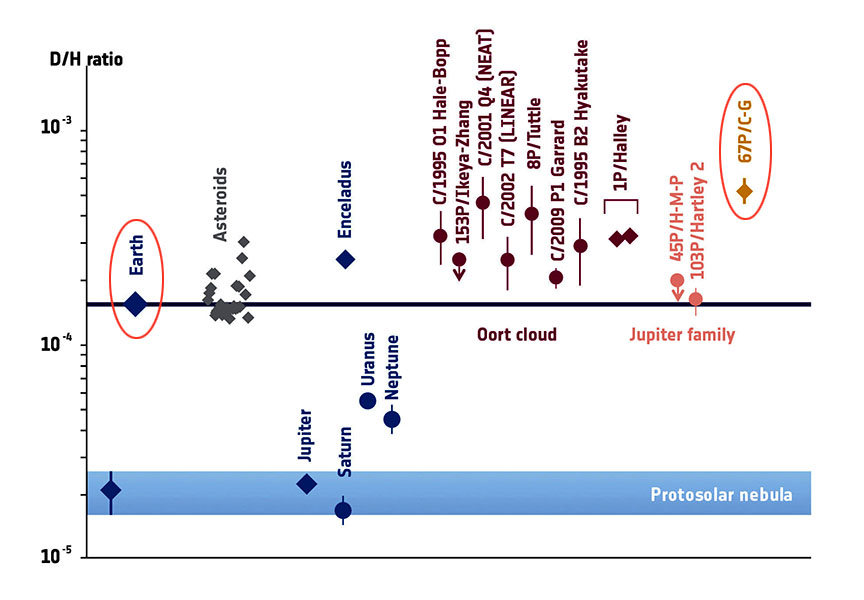 This was in the news lately, as ESA managed to touch down and measure 67P's D/H ratio which gave another hint on the asteroidic origin of water on earth.

This finding, however does not resolve the question:

I could continue this for quite some time, but the bottom line is: We only have hints, not definitive answers.

To refer to the rest of your question: A hot plume in a colder atmosphere will not necesarily leave the whole gravitational potential well.

I don't believe there is factual answer just yet, though many solid theories. Here are some sources I've found to be helpful. I don't necessarily have an opinion myself and while certainly everyone is entitled to one, I wouldn't put too much stock in any one source of information.

It was "always" here: http://news.nationalgeographic.com/news/2014/10/141030-starstruck-earth-water-origin-vesta-science/

ps: had to break the links due to reputation. :/

Not the answer you're looking for? Browse other questions tagged earth comets water or ask your own question.

6
Gravitational pull needed to keep a gas in atmosphere
4
How was water formed?

16
How can we detect water on Mars-like exoplanets?
14
Where did Mars' water go?
3
Do/did the asteroids contain enough water to create Earth's oceans?
4
Why did Earth need material from comets to assemble the raw materials for life?
15
If we found evidence of life on Mars, how would we know that it originated on Mars rather than Earth?
4
How was water formed?
8
What ever happened to the “Small Comet Theory” of water influx on present-day Earth?
4
Water Content of Space Bodies
8
How would water-ammonia oceans behave?
2
Can a single impact event trigger a runaway greenhouse?