Variables in the Instability Strip

I was thinking about the possibility of determining what phase of evolution a variable star is in when it is located in the instability strip (say, a Cepheid object). Can you differentiate whether it is evolving toward the blue (in HR diagram) or back toward the giant branch?

I was looking at a figure recently in Carroll and Ostlie's Intro to Astrophysics text, which brought this to mind. It shows on the HR diagram where Cepheids lie, which is right in this strip.

You can, in fact, differentiate between the crossings of the instability strip in certain types of variable stars. There have been quite a few evolutionary models devoted to this, and many, as well as scores of observations, show that the pulsational period $P$ of a Cepheid variable changes during each crossing. Look at, for instance, the period changes of 60 galactic Cepheids, shown in Figure 2 of Pietrukowicz: 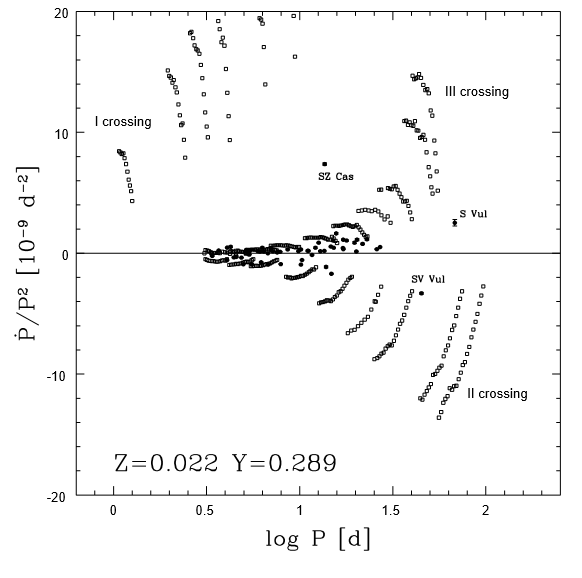 Similar indicators should be present in further crossings (fourth and fifth crossings in the later stages of core and shell helium burnings), and while the amplitude of $\dot{P}/P^2$ would likely be different, the same general positive/negative trends should be present. For more information, see Turner & Berdnikov (2004).

There doesn't seem to be as much information on period changes in non-Cepheid variable stars, although Smith (2013) states that most Mira variables show only minute period changes, if any, and RR Lyrae variables may show period increases as they evolve redwards across the instability strip toward the end of their lives, as is the case with Cepheids. This, by the way, does not fully agree with evolutionary theory.

Not the answer you're looking for? Browse other questions tagged stellar-evolution hr-diagram or ask your own question.

2
Position of a star on the HR diagram
3
How can you determine the distance of a star using the magnitude equation?
1
How can red supergiants be cooler than dwarfs of the same spectral type?
2
How does the stellar evolution for low and intermediate mass stars differ?
5
Is a branch on HR diagram a line formed by stars in the same evolutionary phase, or the evolutionary track of an individual star?
2
What would the HR diagram look like if the axes were scaled linearly instead of logarithmically?