what is a Friedmann model?

The "Friedmann model" is a model of the Universe governed by the Friedmann equations, which describes how the Universe expands or contracts. These equations are a solution to Einstein's field equations, and with two very important assumptions they form the basis for our understanding of the evolution and structure of our Universe. These assumptions, together called "the cosmological principle", are that the Universe is homogeneous, and that it's isotropic. This is a layman's explanation, so I won't write the equations here, but farther down I've added the equation and go a bit more in detail what it means.

That the Universe is homogeneous means that its "the same" everywhere. Obviously, it's not, really. For instance, under your feet is a dense, rocky planet, whereas above your head there's thin air. We live in a galaxy full of stars and molecular clouds and what not, while 100,000 lightyears from the Milky Way, there is virtually nothing. But on very large scales, say above half a billion lightyears, the Universe actually looks the same all over.

That it's isotropic, means that it looks the same in all directions. Again, obviously it doesn't on small scales, but on large scales, it does. If it didn't, it would mean that we occupied a special place in the Universe, and we don't think we do.

So, neither of these assumptions have to be true, but observations tell us that apparently, they are. See this image, where every dot is a galaxy (Maddox et al. 1990):

You might think that a homogeneous Universe would also be isotropic and/or vice versa, but that's not the case.

It turns out that, for these assumptions, there are three possible solutions to the Friedmann equation. We call the three possible universes flat, positively curved (or "closed"), and negatively curved (or "open"). Which of these possible universes we live in, turns out to depend upon the average density in the Universe, so by measuring this, we can determine the "geometry" of our own Universe. And it seems that it's "flat".

The reason it's called flat is that the geometry is like that of a flat 2D table, only in 3D. That is, a triangle has 180º, parallel lines never meet, etc. And it's infinitely large. Intuitively, we'd think that this is the way the Universe is, and definitely on small scales (say within our own Galaxy), it's an adequate approximation. In the 2D analogy, the 2D surface of Earth seems flat locally, and for all practical purposes the parking lot outside is flat. But if you draw a triangle from Congo→Indonesia→the North Pole→Congo, you'd measure it's sum of angles to be roughly 270º. That's because the geometry of the surface of Earth is not flat, but is "closed".

If the Universe were "closed", it's geometry would, in the 2D analogy, correspond to that of the surface of a ball, i.e. a triangle has more than 180º, lines that start out being parallel will at some point meet, etc. But like the surface area of a ball is finite (but doesn't have a border), so is the Universe. So if you take you spaceship and fly straight away from Earth, you would end up back here (assuming the Universe doesn't collapse before you get back, or expand too fast for you).

If it were "open", it's geometry would, in the 2D analogy, correspond to that of the surface of a saddle, i.e. a triangle has less than 180º, lines that start out being parallel will diverge, etc. And it's infinitely large.

This picture from here visualizes the 2D analogies.

In 3D, only a flat geometry can be pictured, and this doesn't look "flat" by any means; it is simply your good old 3D ("Euclidian") space that you know from your everyday senses.

Expansion of the Universe

The Friedmann equation, together with the densities of the constituents of the Universe (radiation, normal matter, dark matter, and dark energy) tell us how the Universe expands. So, again by measuring these densities, we can prediect the evolution of the Universe. And it seems that the Universe not only expands, but actually expands faster and faster.

Beyond the layman's explanation

Here, I'll expand a bit on how to understand the equation:

The Hubble parameter
In the equation, $H$ is the Hubble parameter describing how fast a galaxy at a given distance recedes (or approaches, for a collapsing universe), at a given time in the history of the Universe. $H_0$ is its value today, and is measured to be roughly $70\,\mathrm{km}\,\mathrm{s}^{-1}\,\mathrm{Mpc}^{-1}$. This means that a galaxy at a distance of, say, 10 Mpc ($\simeq33$ lightyears), moves away from us at a current speed of 700 km/s. A galaxy 20 Mpc away recedes at 1400 km/s, and so on (and galaxies farther away than roughly 4.3 Gpc recede faster than the speed of light, but that's no problem and we can still see them).

Size
The size of the Universe is unknown, and quite possibly infinite (lest it wouldn't be homogeneous, but to be fair, we only know that the observable Universe is homogeneous). Thus, we cannot talk about its absolute size. But we can talk about how much a certain volume of space expands in a given time. We us the parameter $a$, called the expansion factor. Defining $a$ to be 1 today, that means that at the time when the Universe was so small that all distances between the galaxies was, say, half of today's values, $a$ was equal to 0.5 (this happens to be 8 billion years ago).

Density parameters
Whether the geometry of the Universe as described above is flat, closed, or open, depends on whether the total density $\rho_\mathrm{tot}$ is exactly equal to, above, or below a certain critical threshold $\rho_\mathrm{cr} \sim 10^{-29}\,\mathrm{g}\,\mathrm{cm}^{-3}$. It is customary to parametrize the density of the $i$'th component as $\Omega\equiv \rho_i / \rho_\mathrm{cr}$.

Matter
The term "matter" includes "normal" matter (gas, stars, planets, bicycles, etc.), and the mysterious dark matter. As the universe expands, the volume grows as $a^3$. That means that the density falls as $\Omega_\mathrm{M}=\Omega_\mathrm{M,0}/a^3$.

Curvature
If space is not flat, its curvature contributes to $\Omega_\mathrm{tot}$. The reason is that the curvature affects the volume in which we measure densities (thanks to John Davis for this explanation). This scales as $1/a^2$.

Dark energy
Finally, there's the magical dark energy, of which even less is known than the dark matter. If it exists, it's thought to be a property of space itself, i.e. its energy density grows proportionally to the volume of the Universe, and thus there's no $a$-dependency.

From the equation, it is readily seen that if we're able to measure all the Omegas, then we know how fast the Universe has been expanding at all times. That means that we can integrate backwards in time and calculate when $a$ was 0, i.e. we can calculate the age of the Universe. Also, from the $a$-dependencies we can see when the Universe went from being radiation-dominated to being matter-dominated. We can also see that not only is it now dominated by dark energy (since $\Omega_\mathrm{\Lambda}\simeq0.7$, but $\Omega_\mathrm{M}\simeq0.3$), but due to the $a$ factor, it will only get "worse". That is, all other densities will keep decreasing, but $\rho_\Lambda$ stays the same, and since dark energy has a repulsive effect rather than attracting, the expansion of the Universe accelerates.

Observationally, it is found (in several independent ways) that all the $\Omega$s add up to one, i.e. that the total energy density of the Universe happens to be exactly equal to the critical density. This is pretty amazing. This figure, taken from here, shows the contribution from the different components now (top), and at the time of the CMB emission (380,000 yr after the Big Bang; bottom): 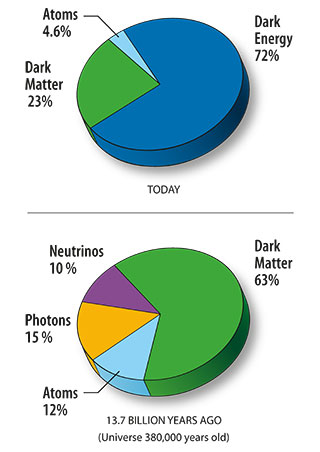 Friedmann made two very simple assumptions about universe,one is that the universe looks identical in which ever direction,the second one is that this would be true if we are observing the universe from anywhere else

13
Will we start seeing galaxies disappear due to Universe expansion?
11
On the cosmological principle
3
Latest cosmological parameters
2
Is our universe flat?
3
Time dilation due to the expansion of the universe
1
Could the Hubble Constant be an artifact of the structure, and thus a way to directly measure the universes's age?
1
Is the universe like the earth?
2
Is spacetime hyperbolic?

11
Inflation cosmology: slow-roll inflation versus tunneling between two vacua
48
Two species of dark matter?
6
To what extent are structure formations unexplained?
2
Neutrino Modelling in Friedmann Equation
14
How is the Hubble constant determined from gravitational waves?
3
Would DCBH form supermassive stars first before BH formation
2
The Lambda-CDM-model: when will the Age of the universe catch up with the Hubble time?