Earth receives shower of both solar and cosmic radiations every seconds. The Sun put up a heliosphere around the solar system and thus foreign high energy charged particles could not penetrate easily. Is there any other source most probably that lies within our solar system?

Normally, the two main sources of cosmic rays are considered to be the Sun (solar energetic particles) and galactic or extragalactic sources, although extragalactic sources are more common. Surprisingly, though, there is a third source, a family of particles known as anomalous cosmic rays (see Hovestadt et al. (1973) and Garcia-Munoz et al. (1973)). These are particles - generally ionized nuclei of lighter elements - primarily originating from interstellar space with energies on the order of $\sim10$ to $\sim10^2\text{ MeV}$.

Anomalous cosmic rays are generally accelerated at the termination shock of the heliosphere, moving into the heliosheath. Some may then escape into the inner Solar System. Here's an image from Stone et al. (2005), which shows them as a distinct population from galactic cosmic rays: 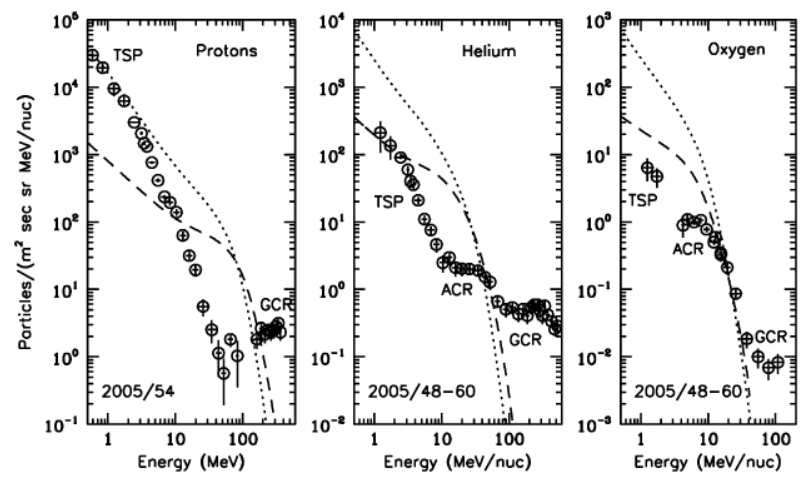 Now, these particles are technically of interstellar origin, even though they are accelerated to great speeds only at the boundary of the Solar System. However, a related population may have been found in the Kuiper Belt (see Schwadron et al. (2002)), formed from grains there after collisions between objects. While these are not necessarily - or even likely - the dominant source of anomalous cosmic rays, they do exist, and thus constitute another source of cosmic rays inside the Solar System.

Not the answer you're looking for? Browse other questions tagged the-sun solar-system cosmic-ray or ask your own question.

11
Are Gamma Ray Bursts of galactic or extragalactic origin?
4
What are the sources of antimatter particles in the magnetosphere?

3
Which kind of properties can we get for cosmic ray particles hitting on an optical ccd?
2
Why do not we use optical telescopes to study cosmic rays directly?
9
Could this be a cosmic ray hit on my cameras sensor (CMOS, DSLR)?
0
Can we manipulate cosmic rays?
3
'Very High Noon' - Sun directly overhead
3
Can cosmic rays alone produce noticeable aurorae in bodies far away from the Sun?
3
Did the International Sun-Earth Explorer detect cosmic rays other than gamma rays?
5
Is there an equivalent of the red shift effect for cosmic rays?
5
Is Cosmic Ray Astronomy a thing?