Can we know the orbital planes of extraterrestrial planetary bodies?

Astronomers can tell if there are any exoplanets orbiting its parent star using but not limited to the following methods:

As an massive object usually a planet passing in front of a star causing the amount of light emitted from the star to dim, by measuring the dimness the data can reveal how big the planet is.

The star will seems to wobble as if there is a massive object usually a planet in orbit playing tug of war in a game of whose gravity is mightier. However since this wobbling effect is difficult to observe nerds prefer to measure the blueshift of the light (as star accelerates in our direction) and redshift (as star accelerates away from our direction) which seems to also tells how massive the planet is.

Note Astronomers can derive the planet's density from its mass and radius(see transit).

So far astronomers are able to determine the size, mass as well as density thus even its composition, is there any way to find the angle of the orbital plane of the exoplanet orbiting its parent star?

I presume what you mean is how does the plane of the orbit compare to the equatorial rotation plane of the star?

The answer is, you can sort of estimate this, by using something called the Rossiter-McLaughlin effect (see also Rossiter 1924; McLaughlin 1924).

You can find plenty of information on the web - I'll add a couple of links when I have a moment - but to summarise:

The rotation of a star broadens its spectral absorption lines. The hemisphere coming towards us emits light that is is blue shifted, the hemisphere receding is redshifted. If we now take a transiting planet, during the eclipse it crosses the disc of the star and obscures regions that are blue or red shifted by various amounts.

Now what you do is measure the line-of-sight velocity of the star. During the transit you would not expect this to vary due to the "Doppler wobble" caused by the exoplanet, except that if the planet obscures a blue shifted portion of the stellar disc, the net spectral absorption line that remains shifts to the red, and vice-versa. The pattern of red, then blue shift (or vice versa) as the transit progresses is known as the Rossiter-Mclaughlin effect.

A schematic showing how the Rossiter-McLaughlin effect works and how a different transit geometry with respect to the rotation axis of the star leads to a different line-of-sight-velocity signature in the spectral lines of the star. (Image credit: Subaru Telescope, National Observatories of Japan.) 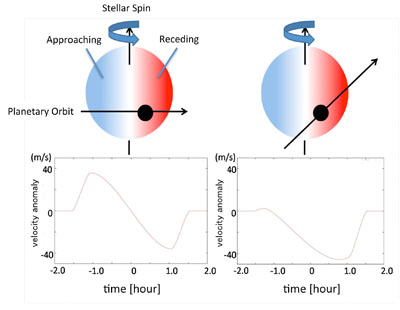 If the planet orbits in the same plane and in the same direction as the stellar rotation (as the planets in our solar system nearly do), then the blue shifted limb of the parent star is obscured first, followed by an equal amount of redshift as the planets moves to obscure the receding stellar limb (see image above, left). Thus the stellar absorption lines show a redshift followed by a symmetric blueshift. If the planet was retrograde it would be symmetric but occur in the opposite order. A Polar orbit would show no RM effect. Inclined orbits would have an asymmetric RM effect - ie perhaps more blueshift than redshift (see image above, right).

The RM effect cannot give an exact orientation, it gives the projected angle between orbital and rotation axes on the plane of the sky. Nevertheless, that is sufficient for us to know that a lot of the transiting exoplanets have highly misaligned orbital and stellar rotation axes.

In case of transit detections, $i\sim 90^\circ$ (for otherwise, there will be no ecclipse/transit), but it cannot (usually) inferred for radial-velocity detections. Since the amplitude of the observed radial velocity is proportional to $M\sin i$, this implies that the planet mass is only limited but could be larger than for $i=90^\circ$.

4
Can we calculate the orbit of exoplanets?

17
What reason is there to doubt the existence of the hypothesised planet Tyche in the far distant solar system?
5
Can General Relativity indicate phase-dependent variations in planetary orbital acceleration?
5
Does the orbital variation in planetary gravity affect the Sun's corona
1
Are there any works discussing planetary bodies being forms of life?
6
Is there a web service providing orbital data of solar bodies (planets, comets, asteroids, dwarf planets)?
6
Is extraterrestrial mining more difficult or impractical for bodies without plate tectonics?
3
A few questions regarding the transit of planets
2
How to calculate the orbital period and the density of a planetary body?
2
What would be the year length of a habitable planet of 40 Eridani A?
5
How to calculate eclipses on a planet in a binary star system