Iapetus's hemisphere facing Saturn is dark, whereas the opposite one is bright.

Reposting my own answer from Space Exploration on nearly identical question:

The color dichotomy of Iapetus is due to the darker half, the Cassini Regio, being a result of the moon's accumulation of the dust in the Saturn's largest, yet extremely tenuous, diffuse dust ring called the Phoebe ring depositing onto the moon's leading hemisphere, while the trailing hemisphere's surface remains uninfluenced by this source of dust.

Phoebe ring was only observed first in late 2009 by the Spitzer telescope in the infrared range, and is believed to have been caused by bombardment of micrometeorites of Phoebe, another Saturn's moon that the prevailing theories suggest is a captured Kuiper belt originating planetesimal orbiting Saturn in a retrograde, 173° to the ecliptic inclined orbit. It is the largest discovered ring of the Saturn, stretching from calculated 59 to 300 Saturn's radii (observed between 128 and 207 Saturn's radii by the Spitzer telescope), is tilted 27° to Saturn's inner rings and with an orbital inclination of 175°, suggesting its origins and again retrograde orbit: 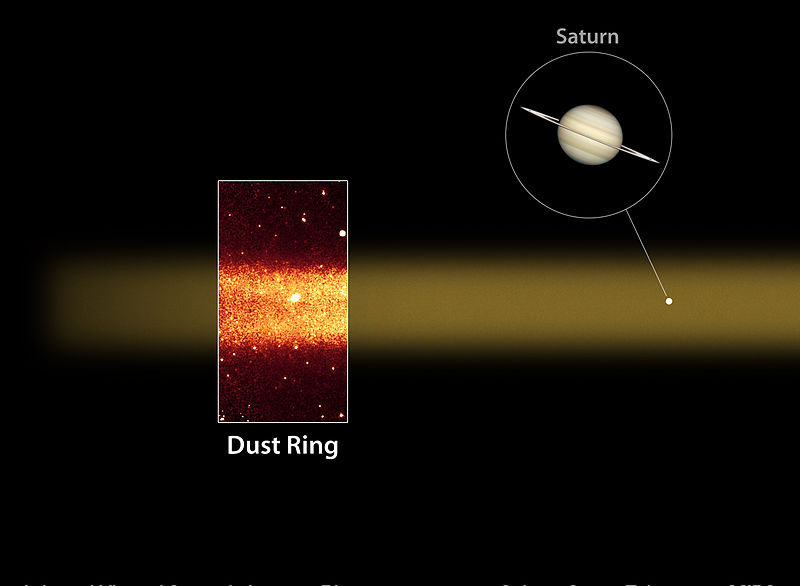 The Phoebe ring was discovered by NASA's Spitzer Space Telescope, detecting it in the infrared spectrum. (Source: Wikimedia)

Iapetus, being in a prograde orbit with a 17.28° inclination to the ecliptic, is directly in the path of this retrograde dust ring at an average distance from Saturn of 215 Saturn radii. Since it's tidally locked to Saturn, it would always face same side towards any debris and dust in its path. Joseph A. Burns, Cornell's Irving Porter Church Professor of Engineering and professor of astronomy said in a press release for Cornell Chronicle:

"The ring of collisional debris that has come off Phoebe and its companion moons is out there, and now we understand the process whereby the stuff is coming in. When you see the coating pattern on Iapetus, you know you've got the right mechanism for producing it."

So this is the theory. Iapetus is in a prograde orbit intersecting at inclination Phoebe dust ring in a retrograde orbit around Saturn, and since Iapetus is tidally locked and always hitting this dusty path head on, only one hemisphere (the darker one, called Cassini Regio) is covered in Phoebe's dust, while the other hemisphere (the lighter one, called Roncevaux Terra) remains free from it, unveiling this Saturn moon's true surface. 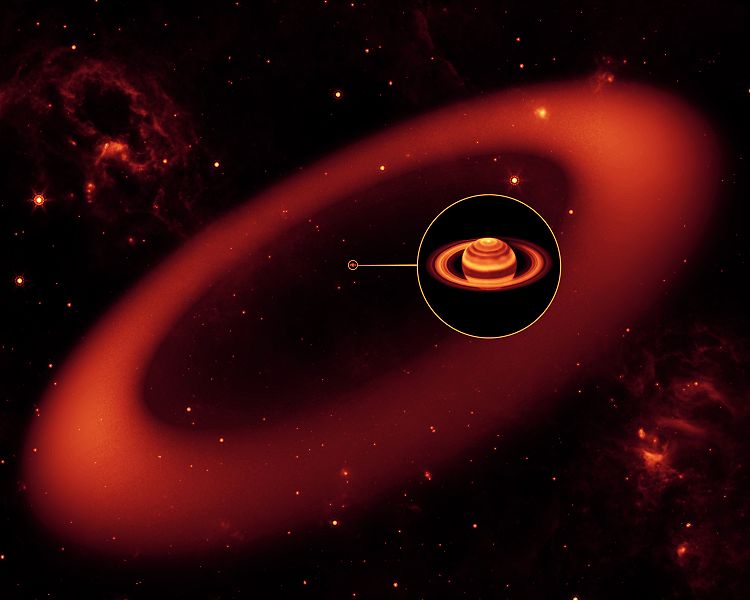 Same mentioned Cornell Chronicle press release explains why the transition from the dark hemisphere to the whiter parts of the moon isn't seamless, but rather a mottled, patchy array of bright and dark spots:

Small, white craters that dot Iapetus' darker half indicate a veneer of dark dust, only meters deep, covering a white, icy surface that matches the rest of the satellite. The imaging data also revealed that all the materials on the leading side are much redder than the shielded and brighter trailing side -- another indication that the leading side's dust came from elsewhere.

The pattern, the scientists say, supports a theory described in a companion paper in Science that the darker parts of the moon tend to heat up when struck by sunlight, encouraging the ice to evaporate underneath.

This causes any dark spots to get even darker, creating the mottled look. 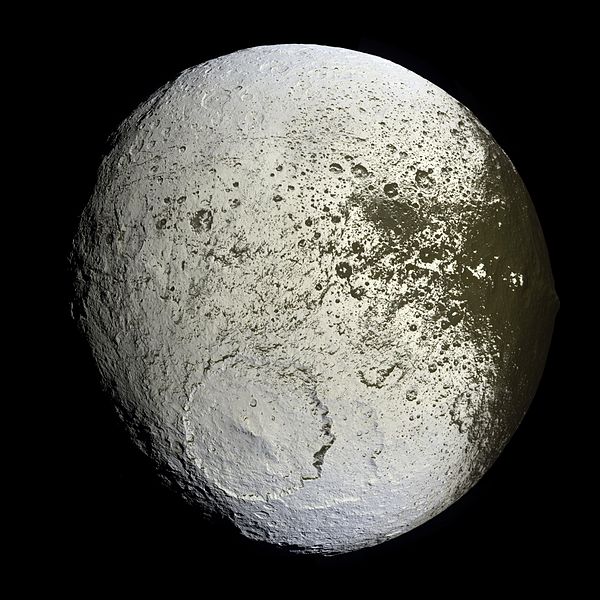 Not the answer you're looking for? Browse other questions tagged natural-satellites volcanism or ask your own question.

69
Why is only one side of the Moon visible from Earth?

23
Can a natural satellite exist in a geostationary orbit?
6
What mechanism could have formed the Moon's Oceanus Procellarum rift-like gravity anomalies?
3
Could this three moons system be stable?
4
Could the Moon naturally capture a large asteroid and keep it as a subsatellite? For how long?
3
Is there a significant temperature difference on the moon from apogee to perigee or vice-versa?
2
Could a Jovian or Saturnian moon keep its atmosphere if the system was within the habitable zone?
4
What is the difference between a moon and a random chunk in the rings
1
If a planet gained too many moons could the tidal forces of those moons rip the planet apart?