How can we tell the difference between matter and antimatter by observation in space?

I just was wondering and searching on the internet with little luck in the topic. On Antimatter Wiki they tell the observable universe is built up by matter. I read antimatter can be detected in cosmic rays in very small quantity. But let's go in theories and our practical knowledge, my question is:

How could we detect if a set of objects (like an entire galaxy) is completely built up by antimatter? Since matter and antimatter look like "mirror image" on current, could they form a similar object which is indistinguishable from "our" matter objects? I mean, would spectrum analysis for example show that it is not matter, but built up by antimatter?

Linked question: Are we sure about that what we see in universe is matter?

I do believe @userLTK to be correct on his comment.

To my limited knowledge, the absence of gamma-ray bursts that characterizes matter-antimatter interactions hints of baryonic matter prevalence throughout the visible universe; an anti-galaxy near a baryonic galaxy would show a healthy amount of gamma rays originating from boundary particle collisions. 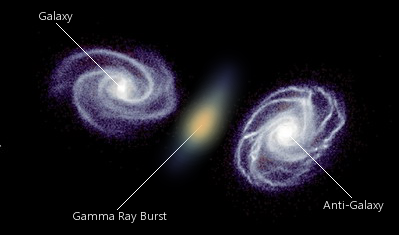 This effect would be observable between structures of any scale - e.g. star/anti-star, galaxy/anti-galaxy or supercluster/anti-supercluster.

"Light from the Depths of Time", by Rudolph Kippenhahn, mentions that

[...] Even when, like a star, it is radiation, its spectrum remains exactly the same, quite independent of whether atoms or anti-atoms are responsible for the light.

So the light originating from anti-galaxies would look the same as ordinary galaxies. But what about gravity?

A quote from "Isodual Theory of Antimatter: with applications to Antigravity, Grand Unification and Cosmology" may help us further:

[...] However, the photons is invariant under charge conjugation and travel at the maximal causal speed in vacuum, c. Therefore, the photon could well result to be a superposition of positive and negative energies, perhaps as a condition to travel at the speed c, in which case the photon would be an isoselfdual state, thus experiencing attraction in both fields of matter and antimatter.

Meaning that antimatter would also cause gravitational effects, such as lensing.

That would make remote detection of anti-matter quite hard - it would emit and bend light in exactly the same fashion as common matter.

Faraday polarization rotation could give us some hope:

Polarized light, e.g., from non-thermal synchrotron sources, that passes through gas with a non-zero magnetic field will have its polarization vector rotated by the process of Faraday rotation. [...] Note that regions dominated by antimatter (positrons) cause a rotation opposite to that caused by regions dominated by matter (electrons).

But the same source mentions that

The effect has been measured many times and the amount of rotation, usually expressed in terms of the so-called “rotation measure” is given by the line-of-sight integral [...] The fact that we observe an effect at all means that on average, we can’t have equal amounts of antimatter and matter along our various lines of sight.

So it seems that the visible universe is missing some antimatter after all.

Not the answer you're looking for? Browse other questions tagged observational-astronomy antimatter .

2
How do we know that other planetary systems aren't composed of antimatter?
8
What observations show that galaxies are made of matter instead of anti-matter?