I understand why our sky is blue and turns red when the sun sets or rises. I know why the sky on mars is red, but why does it turn blue during sunsets and rises? Shouldn't this actually not work due to the shorter wavelenght blue has compared to red?

tl;dr: On Earth, atmospheric molecules scatter blue light more than red. In contrast, on Mars atmospheric, $\mu\mathrm{m}$-sized hematite dust particles happen to give the opposite effect.

Scattering of light of wavelength $\lambda$ on particles of radius $r$ may be described in general using Mie theory. Using the variable $x \equiv 2\pi r/\lambda$, the scattering cross section $\sigma$ increases steeply with $x$ until $x\sim2\pi$, after which it decreases again and starts to oscillate, as seen in this figure: 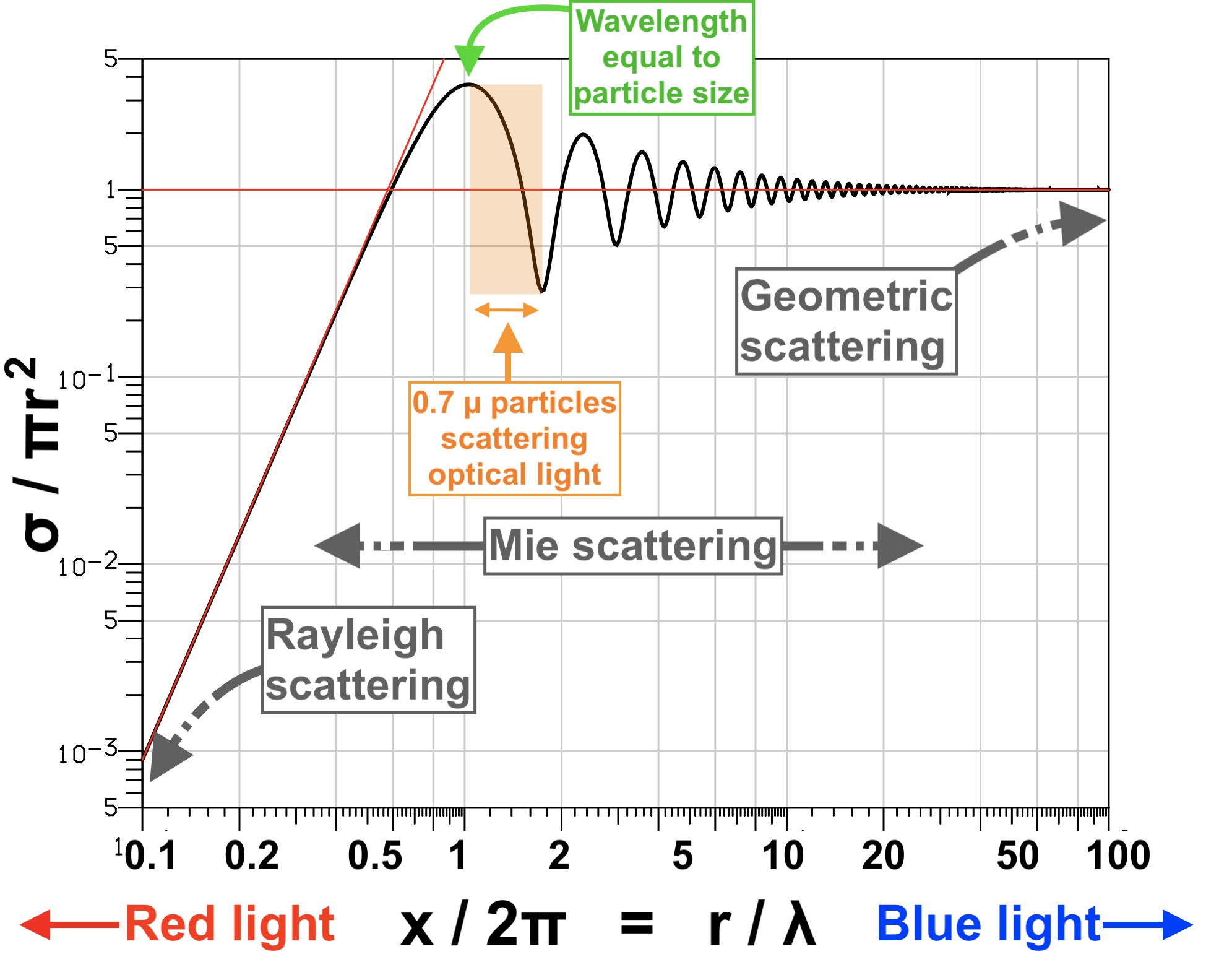 Scattering cross section (normalised to the geometrical cross section) as a function of particle size-to-wavelength ratio (from Wikipedia with my own annotations).

In other words, when a particle is much smaller than the wavelength of the light ($x\ll 1$), the probability of scattering the light increases steeply with decreasing wavelength — in fact the cross section goes as $\lambda^{-4}$. This regime is called Rayleigh scattering. The scattering efficiency reaches a maximum for particles roughly equal to the wavelength of the light ($x\simeq2\pi$; green arrow in the figure). Hereafter, it falls again, exhibits some oscillations that have to do with interference in the particle, slowly converging to the "geometric" value $\sigma = \pi r^2$ (i.e. what would be expected classically).

In many (astrophysical) situations dust tends to be a distribution of sizes with more small than large particles (typically $n\propto r^{-3.5}$), meaning that an ensemble of dust has much more particles that scatter short wavelengths (blue) than long wavelengths (red). Thus, blue light is filtered out and red light light tends to be transmitted, in effect reddening the light.

On the other hand, if the dust consists of particles of the same size, then the extinction may rise and fall with wavelength, as seen in the figure. For example, optical light with $\lambda \simeq [0.4\text{–}0.7] \,\mu\mathrm{m}$, scattered by particles of size $0.7\,\mu\mathrm{m}$, is scattered according to the orange region in the figure — i.e. red light is scattered more efficiently than blue light. The exact form depend on the refractive index of the scatterer.

When a photon is scattered, it doesn't happen in a completely random direction, but follows a direction distribution given by the phase function. In the Rayleigh regime, there is a slight preference for forward and backward scattering, but for large $x$ there is a strong preference for forward scattering, as seen in this diagram (from these slides):

On Earth the sunlight is scattered primarily by molecules which are much smaller than the wavelength of the light, i.e. we're in the Rayleigh regime. Hence, blue light tends to be scattered a lot, creating the blue sky. As the blue light is filtered out of the line of sight (LOS) toward the Sun, its light — white to begin with — becomes more yellow. And as the Sun sets, its light has to go through a thicker layer of atmosphere, enhancing this reddening effect and giving a red sunset.

On Mars, there is almost no atmosphere, only 1% of Earth's. Instead, the Sun's light is scattered by the fine, red dust swirled up in the (thin) air. Martian dust contains hematite ($\alpha\text{-}\mathrm{Fe}_2\mathrm{O}_3$), the mineral responsible for Mars' red color. This iron oxide has a very wavelength-dependent refractive index, and the grain sizes lie rather tightly around a few $\mu\mathrm{m}$, scattering red light more than blue as in the (ideal) example given above (e.g. Ockert-Bell et al. 1997; Lane et al. 1999). This has nothing to do with the fact that the dust is red, but is merely a consequence of the size of the particles.

Hence, in this case it is the red light which is filtered away, making the Sun appear blue, especially as it sets.

The unusual size distribution of the dust particles described above is the reason for the blue disk of the Sun, but cannot explain the blue halo around it (Ehlers et al. 2014). This spectacular phenomenon is caused by the difference in the phase function described above: Whereas Rayleigh scattering is rather isotropic, Mie scattering tends to scatter in the forward direction, and Martian dust in particular has a large asymmetry parameter (e.g. Vincendon et al. 2007), meaning that light that is scattered has a preference for being scattered along the LOS, i.e. toward the observer of the sunset.

Moreover, the asymmetry parameter is dependent on the wavelength of the light, with the forward scattering of blue light being much more pronounced than for red light, as seen in this figure:

Probability of scattering at a given angle for blue light (425 nm, left) and red light (694 nm, right). The three line types correspond to different models (from Ehlers et al. (2014)).

Hence, the red light has a larger tendency to be scattered out of the LOS, creating the reddish sky.

I promised a pretty picture. Here's a Martian sunset: 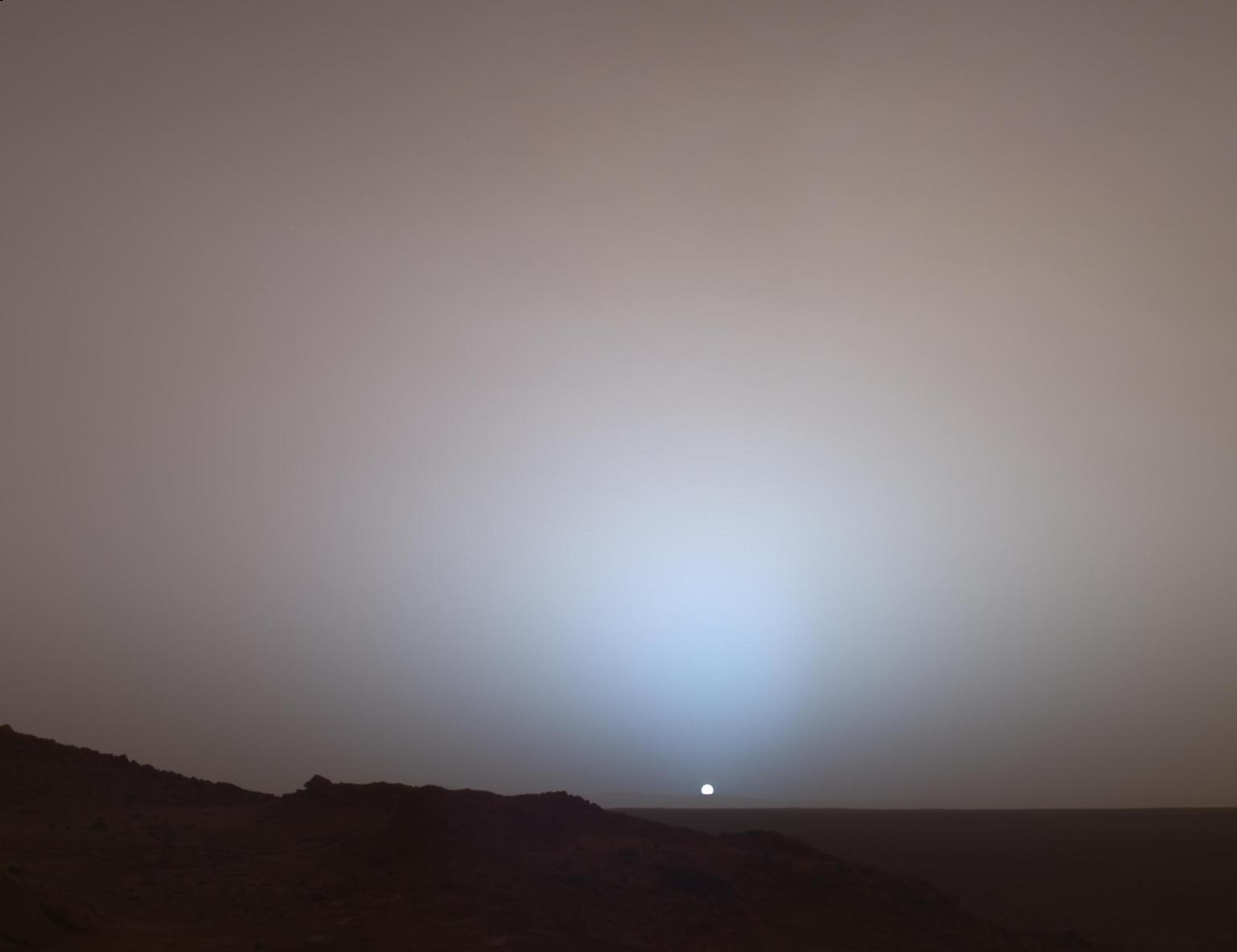 Blue Sun and Moon on Earth

On rare occasions, aerosols in Earth's atmosphere can make the Sun and Moon appear blue. When the volcano Krakatoa erupted in 1853, the Moon looked blue in some places on Earth for almost a month (Aitken 1892).

Not the answer you're looking for? Browse other questions tagged light mars or ask your own question.

6
Why is blue light extincted more strongly than red?
4
What color is the Sky on other Planets?
3
Any information on the salt content of Mars' atmospheric dust?

1
Do far away planets reflect light in the same way our moon/earth reflects light?
37
Why does the Moon appear gray when passing between the Sun and the Earth?
7
Why isn't the moon orange all the time?
4
Why is only a narrow chunk of sky darkened in this amazing Curiosity solar eclipse GIF from Mars?
2
Retrogradation movement of planet Mars relatively from Earth by Copernic
2
How dark/bright are polar nights?
6
Is the Object in this Photo Mars?
5
Why are only the poles of Mars frozen, despite too cold temperatures on lower latitudes?