Moon's orbit around the Sun

But on Wikipedia and some other sites I found out that the orbit is actually like this:

After further searching I found out a better, easier explanation regarding the orbit path on YouTube for those interested, be sure to check it out.

Even your second image isn't correct. Imagine zooming in on a small portion of the Moon's orbit about the Sun, for example, one full moon to the next, with the Sun zoomed out of the picture. Now imagine drawing a line segment from one outer cusp (full moon) to the next. In both of your images, that line segment crosses outside of the curve. In other words, both of your curves are concave.

No. The Moon formed at four to six Earth radii, far less than the 40.6 Earth radii figure cited above. The Moon's orbit initially looked like your second image.

The massive planets are much further from the Sun than is the Earth and are much more massive than is the Earth. The orbits of most of the moons of Jupiter about the Sun are concave rather than convex. Only the outermost moons of Jupiter have convex orbits about the Sun. A few of Jupiter's innermost moons (Metis, Adrastea, Amalthea, Thebe, Io, and Europa) exhibit the retrograde motion depicted in your first image.

Not an answer, but I thought this was a good slice of a picture of the Moon's orbit around the sun.

This is a very old question, and already has great answers, including a diagram drawn to scale. I just want to add a very simple analogy that shows how both pictures in the question are wrong (the second one is less so than the first, if we admit the dubious degree of wrong). Below is how I explained the Moon-Sun motion to some friends, and they grasped it right away, so I still hope my addtion may be helpful.

Think of the Olympic sport of long track speed-skating. Two competitors are running close to each other at a great speed on almost concentric circles (let's make this track round for simplicity, not oval like in real sport). Since one of the skaters is running a bit longer track, the rules require they switch lanes on every lap, so no one of the two is at a disadvantage. 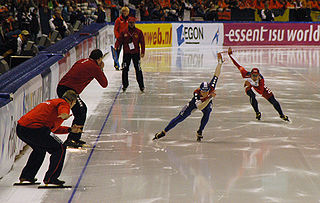 Suddenly, the Olympic committee changes the rules. The skaters must now run not a 400m track, but a whopping 10km long one (a circle about 3.2km in diameter), and change tracks not once per lap, but 13 times. The stadium is large, and the curve of the track is so slight, that the outer runner during the change still traces a convex curve when moving towards the inner track at 0.2 m/s while maintaining 15 m/s forward speed along the track [Note: these two figures, unlike others, are inconsequential for the analogy].

Now, say one of the guys is not quite consistent. He speeds up a bit, then slows down a bit, but still catches up with the second. In fact, it happens so that when he moves outside, he's behind the second, but when moving to the inside track, he's ahead. Imagine what you would see from a drone camera following the runners from above. Wow, they orbit each other! And neither of the paths is concave, like on the second picture, nor are there any backward-going loops like that on the first picture. They always go forward, to bring home that medal!

The numbers above are approximating Earth and Moon orbits. Earth orbit around the Sun is ~400 times larger than that of the Moon around the Earth, as is a standard 2-lane track width of 4m is 1/400 of the 1.6 km radius of our supertrack. The Moon makes about 13 turns around the Earth in one Earth's year. Of course, in a better analogy, the Earth runs in the middle of the track, deviating only slightly, and the Moon is rhythmically bobbing between the innermost and outermost edges. There are also no abrupt lane changes at set points for the Moon (and this smooths out the curve even more away from concavity compared to skaters paths). But since we are in a thought experiment, let's pretend the Olympic committee has an exception for this peculiar pair.

In the case where the moon takes a long time to orbit the planet (like the Earth-Moon), the orbit just wiggles along the circle.

In the case where the moon has a short orbital period compared to the planets year (like Jupiter-Io), the path is like you drew in the first figure.

For the Earth-Moon system, ...
Yes, it has always been that way.

[NOTE: The animated GIFs are too large to copy into this post, but the URLs should work]

EDIT: all 3 animated GIFs are now available on youtube:

The image above would apply if:

Here, you see the loop-de-loop orbit you originally expected.

Now, what if we reduce the distance to 10 million km (still very large):

As you can see, the loop-de-loops are gone, although the orbit still has some "sharp points", which we don't see in the Moon's real orbit.

If we reduce the distance to 3 million km, we get something closer to what expect:

Here, we have a wobbly circle, closer to what actually happens.

Of course, the Moon's actual distance from the Earth is only 0.35 million km, so the actual wobbles are much smaller. I tried to do a graphic of those, but the two orbits ended up on top of each other.

The moon's orbital path around the sun is a monthly semi-circle called a cycloid in geometric terms.

Draw a circle representing the moon's orbit. This is the rolling circle (forget the earth). Touching this circle draw an arc to represent the sun's extended circumference. This will be the base circle.

Where a line drawn between the two centers cuts the circles is the start point of the cycloid, named the new moon which is the closest point to the sun. As this point on the rolling circle moves around the base circle it will come, after one revolution back to the base curve. The path traced out will be a semi-circle and the distance between the two points will be a month on the baseline circle.

The Moon’s path around the Sun IS in the form of an epicycloidal curve.

The dictionary explanation of epicycloid is: ─ A curve traced by a point (the moon) on the circumference of a circle (moon’s orbit), rolling on the exterior of another circle (the arc of the extended radius of the sun)

The Moon is a part of a two orbiting systems.

Earth, Moon and Sun relationships and the Moon’s movement around the Sun.

Not the answer you're looking for? Browse other questions tagged orbit the-moon the-sun earth natural-satellites or ask your own question.

11
Why is there no concavity in the orbit of the moon around the Sun?
4
Moons with curlicue paths around our Sun?
0
What shape do satellites trace as they wobble in orbit around another body?

15
Is the rotation of the Sun and the rotation/orbit of the Moon around the Earth a coincidence?
8
Did we ever actually see the earth revolving around the sun? Is the geocentric model completely disproved?
17
Will Earth lose the Moon before the Sun goes into supernova?
18
Why doesn't Earth's axis change during the year?
10
Best approximation for Sun's trajectory around galactic center?
0
What is the shape of the Sun's orbit around the Earth taking into account elliptical orbits?
2
Does the Sun and Moon basically appear to “move on the sky” identically regardless of location and date?
4
Moons with curlicue paths around our Sun?