How does the Grand Tack Hypothesis explain how Jupiter formed inside the frost line?

The Grand Tack Hypothesis states that Jupiter formed at roughly 3.5 AU from the Sun, then interacted with a large portion of objects in the Solar System before settling into its current orbit.

Yet as I found from researching for an answer to this question, giant planets generally form beyond the frost line - in fact, this explains why the giant planets are cut off from the terrestrial planets.

How does the Grand Tack Hypothesis get around this?

A direct cribbing of the wiki's page for the frost line:

In astronomy or planetary science, the frost line, also known as the snow line or ice line, is the particular distance in the solar nebula from the central protostar where it is cold enough for volatile compounds such as water, ammonia, methane, carbon dioxide, carbon monoxide to condense into solid ice grains. This condensation temperature depends on the volatile substance and the partial pressure of vapor in the protostar nebula. The actual temperature and distance for the snow line of water ice depend on the physical model used to calculate it:

Occasionally, the term snow line is also used to represent the present distance at which water ice can be stable (even under direct sunlight). This current snow line distance is different from the formation snow line distance during the formation of Solar System, and approximately equals 5 AU. The reason for the difference is that during the formation of Solar System, the solar nebula was an opaque cloud where temperature were lower close to the Sun,[citation needed] and the Sun itself was less energetic. After formation, the ice got buried by infalling dust and it has remained stable a few meters below the surface. If ice within 5 AU is exposed, e.g. by a crater, then it sublimates on short timescales. However, out of direct sunlight ice can remain stable on the surface of asteroids (and the Moon) if it is located in permanently shadowed craters, where temperature may remain very low over the age of the Solar System (e.g. 30–40 K on the Moon).

Observations of the asteroid belt, located between Mars and Jupiter, suggest that the water snow line during formation of Solar System was located within this region. The outer asteroids are icy C-class objects (e.g. Abe et al. 2000; Morbidelli et al. 2000) whereas the inner asteroid belt is largely devoid of water. This implies that when planetesimal formation occurred the snow line was located at around $R_{snow} = 2.7$ AU from the Sun.

So in all of the three listed models, as well as the snow line inferred from asteroid properties, it seems that the 3.5 AU starting distance for Jupiter in the Grand Tack hypothesis remains comfortably behind the snow line (for water, at least, which is still an advantage over the inner planets).

Since it ultimately fell well within the snow line for a time, one would expect any exposed ices to rapidly sublimate. I would guess that it made up for this by accreting the rockier planetesimals found in the inner parts of the Solar System, which could then shield the remaining ices.

This site offers a pretty good detailing of the basic structure of the Grand Tack Hypothesis. The most digestible piece of information is at the very bottom, in the form of an AVI file that models the first few million years of the solar system. The short answer to your question is "Jupiter is assumed to have already formed some fundamental core at the start of the hypothesis, then moves around accreting and scattering things through the inner solar system, until returning to the outer solar system to finish growing". The initial inward migration is caused by interactions with the relatively thick gaseous disc (the majority of it will never become part of any planet), which creates drag on the planets/planetesimals and causes them to lose velocity and fall inward.

But the video's pretty cool, so I'm going to link it and talk about it just for its own sake.

You may find it best to run this at half speed or slower to really see what's going on.

Here's how it starts out. 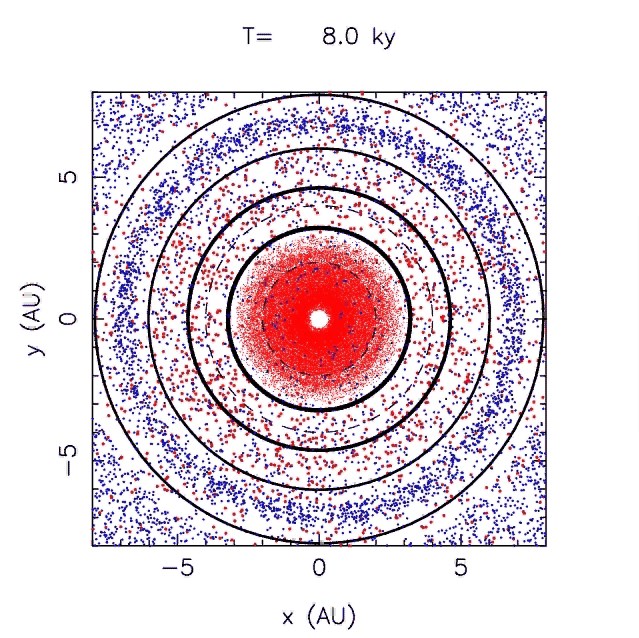 The solid black orbits are the gas giant orbits, with Jupiter being the innermost one, and Saturn the one after that. The dashed circle represents a 2 AU distance from the sun (modern day Mars is currently at about 1.5 AU, and the modern asteroid belt stretches roughly 2.2-3 AU). This is noteworthy since the model is trying to explain why Mars is so small, and why there is so little material (relatively speaking) in the asteroid belt. The numerous small blue dots are the icy comets/planetesimals that form right around the point Jupiter starts out, and points beyond. The numerous red dots are the rocky asteroids/planetesimals characteristic of the inner solar system.

Saturn is also slowly moving in, but not nearly as quicky as Jupiter is (Neptune/Uranus seem pretty stable, but do "pulse" in and out a bit). 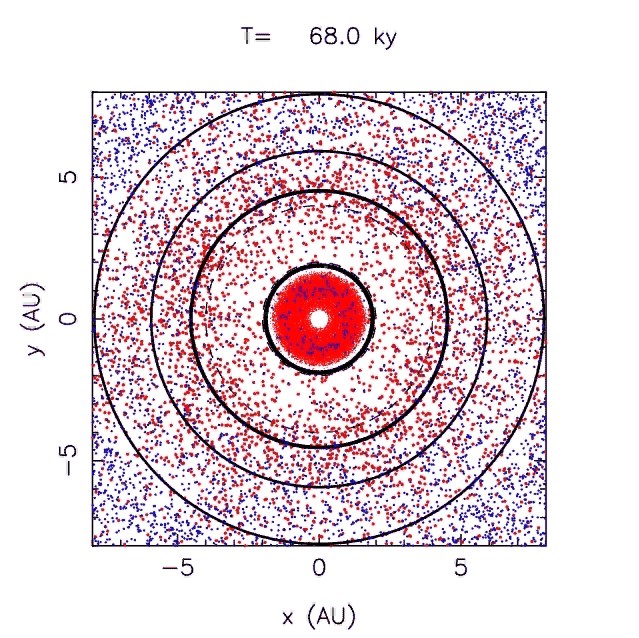 In this image we see that Jupiter hits the 2 AU mark at ~3 seconds in, corresponding to a model time of about 68,000 years. At this point you can see a dashed circle at about the 3.5 AU distance, corresponding to Jupiter's starting distance. Saturn is about 4 AU out now, having started at over 5.

The third through fourth second are fairly stable-looking, with Jupiter moving in to about 1.5 AU but the other outer planets staying mostly put. 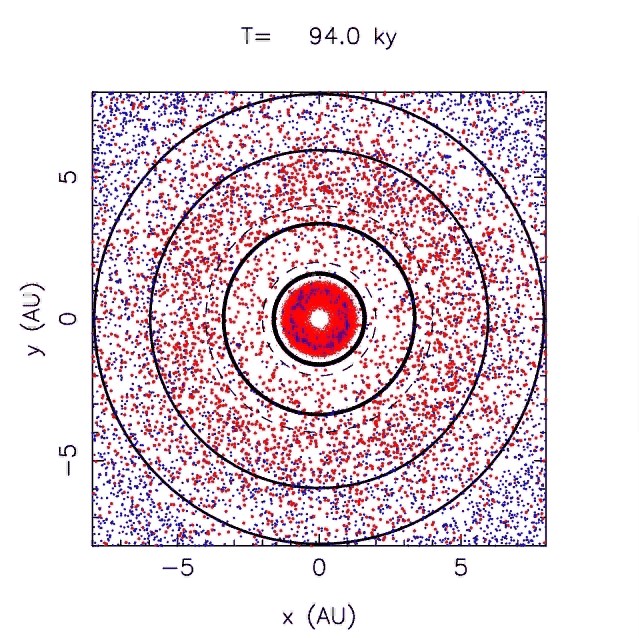 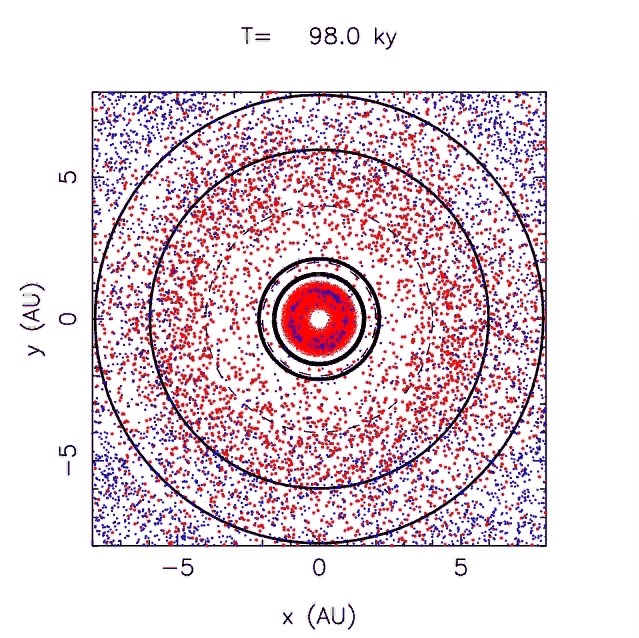 We see Saturn make a very rapid move inwards. This is the main reason I suggest playing it slowly, as you can very easily miss it and lose track of where each solid black orbit has come from. By model time 98,000 years (still in the 5th second of the video time), Saturn has already come to within about 2 AU of the Sun; Jupiter is still about 1.5 AU, and there is a thick concentration of mostly rocky planetesimals within 1 AU. 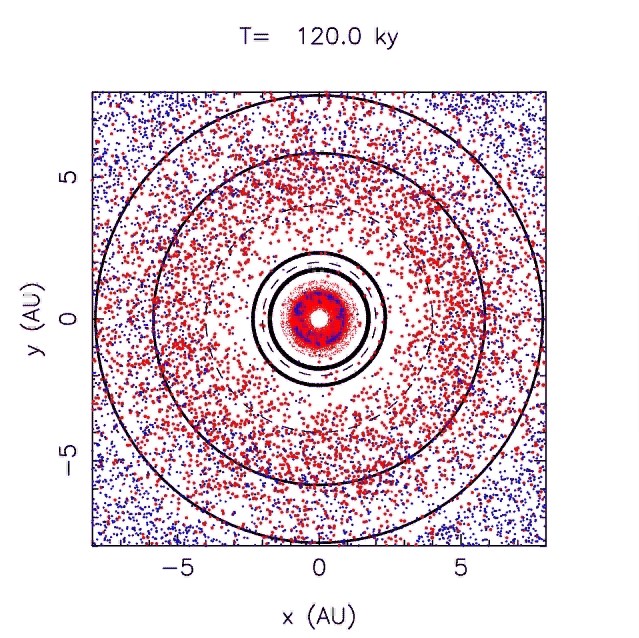 By model time of about 120,000 years, Saturn and Jupiter are rebounding back out into the outer solar system, to much the same distances we see today, scattering most of the planetesimals that remained in the areas that would become Mars and the asteroid belt. This leaves a fairly dense disc of material for Earth, Venus, and Mercury to form and grow from, while leaving significantly less for Mars, and lesser still for the asteroid belt. 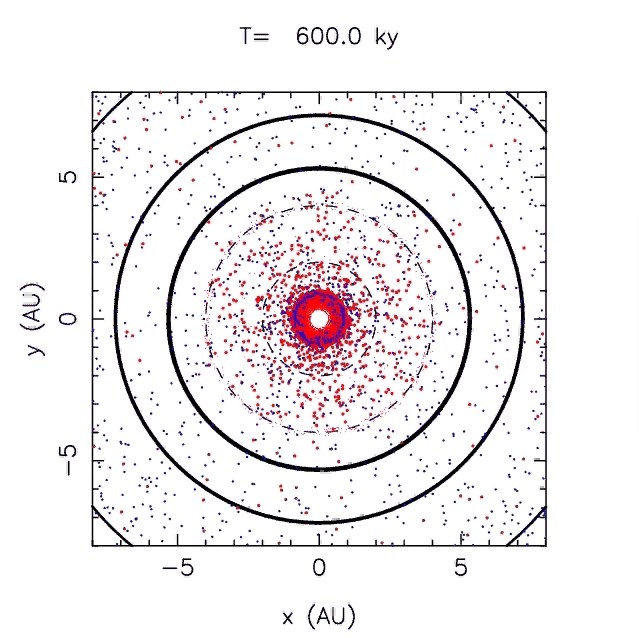 15
The compatibility of the Grand Tack hypothesis with the "core-warping impact" theory of Jupiter's diffuse core
3
How did Jupiter form where it is?

3
How does water exist within the frost line of a star?
1
Do the terrestrial planets form later than gas giants in our solar system?
2
What starting circumstances have to be for "grand tack" hypothesis to work, and why they are lacking in other planet systems(as far as we know)?
10
How was Jupiter formed
5
Are there any simulations of the Grand tack?
4
Could Planet Nine be much smaller than thought previously?
3
The Solar System formation
15
The compatibility of the Grand Tack hypothesis with the "core-warping impact" theory of Jupiter's diffuse core
8
Feasibility of Grand Tack Hypothesis
23
Intuitive explanation of the source of energy that cause Jupiter and Saturn to migrate outward in the Grand Tack Hypothesis?