Is it possible to use Hubble Telescope to observe Earth in the past?

We can observe many astronomical objects and structures beyond our solar system, however our observations are as the objects appeared in the past due to the speed of light. My question: "Is it possible to use Hubble Telescope to observe Earth as it was in the past" by turning Hubble's lens to a previous location of Earth in space? 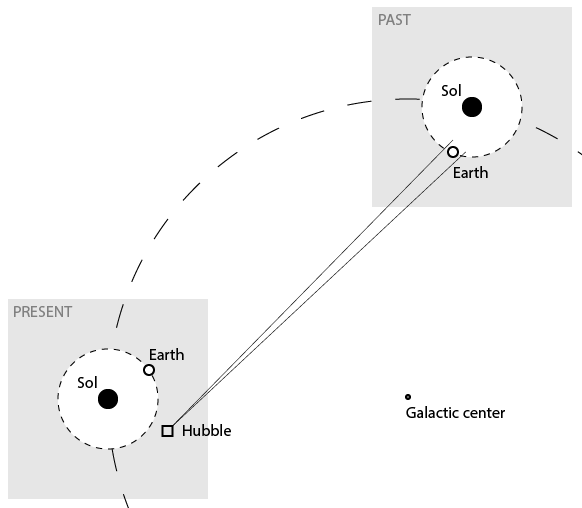 The only way you can use Hubble to view the Earth "in the past" is to swivel it and point it at the Earth now. Assuming that this didn't break the telescope (it would) you would collect images of the Earth's surface that were approximately $500\times10^{3}/3\times10^{8} = 0.0017$ seconds old, since that is how long it takes light to travel from the Earth's surface directly below HST to its $\sim 500$ km orbital height above the Earth's surface.

The problem with what you suggest, is that although we might be able to pinpoint where the Earth was in the past with respect to its position now and the Galactic centre (actually that would be very hard in practice), the light that came from the Earth then has long since travelled beyond where the Earth is now.

For instance, let's say the Earth/Sun travel around the Galaxy at approximately 230 km every second and say we want to look at the spot where the Earth was 1000 years ago. Well, it turns out then that the Earth was at some location in space that is currently about $7\times 10^{12}$ km away (7 trillion). But the light that came from the Earth then, has already been travelling outwards at the speed of light for 1000 years, covering a distance of 1000 light-years, which is about $10^{16}$ km. So that light passed by our current location in space more than 999 years ago.

Technically yes you would be able to. Picture this. If you were to position a gigantic mirror 10 light years from earth (let's say you are 10 at the time) and the mirror was pointing right at you. When you are 30 (so in 20 years because it would take light 10 years to get there and 10 years to get back) you would be able to see yourself when you were 10. Now picture that was the earth and yes you would be able to. Another way is if you were able to move faster than the speed of light then you could get to a point in space where earth's light hasn't reached yet and you could observe earth from that light that it enjoyed a long time ago. I hope these 2 answers helped and answered your question.

Not without some hypothetical faster-than-light travel.

Hubble is seeing distant galaxies as they were in the past because they're so far away that the light from those galaxies takes a very long time to get here. If the galaxy is 1,000 light-years away, you're seeing it as it was 1,000 years ago. The light reflected from Earth moves much more quickly than the Earth itself moves. Pointing a telescope to where the Earth was won't show you what the Earth looked like at that time because the light coming from Earth at that time is already gone.

Hubble orbits at about 569 km. If you point it at the earth and take a photo, the speed of light (300,000 km/sec) will result in you obtaining a photo of the earth as it appeared 1.9 milliseconds before you clicked the shutter.

4
Can we see Earth by looking into space?
0
Using a telescope to look at the Earth History in Some Detail