I was wondering if it would be possible to measure red shift from distant galaxies using consumer grade telescope equipment and spectroscopy filters. (like this one)

I imagine it would require a tracking mount, and enough aperture to gather data on distant faint objects, but I wonder if it would require more sensitive equipment then a consumer grade tools available for under 5-6 thousand.

A long term goal would be to replicate Hubble's work, and directly measure the expansion rate of the universe from backyard equipment.

Looks like you can measure the cosmological redshift of quasars using that equipment and an 14" reflector:

http://www.rspec-astro.com/sample-projects/ (halfway down the page)

So the answer appears to be yes, you can do it, assuming that page isn't a total fabrication. Seems plausible to me: the redshift of that quasar is sizable at 0.15 (though that's small for a quasar), which means that the spectral lines will be shifted by something like 15%. So you don't need to have a very fine diffraction grating to see the shift. And that quasar is pretty bright for a quasar, at magnitude 13, so you can easily spot it with a good scope. Sounds like a fun project!

As freelanceastro noted in his answer: Yes, you can measure the cosmological redshift of quasars with simple equipment.

The page he referred to is not a fabrication. (See the article on amateur astronomical spectroscopy in the August 2011 issue of Sky & Telescope.) Many amateurs have made this measurement with a variety of instruments, including a modified security camera on an 8" SCT. (That one took just 15 minutes total integration time, which is about what most most amateurs find using typical equipment.)

As astromax notes, capturing the spectra of extended objects generally requires a slit, but not always! For example, a lot of amateurs captured spectra of comet ISON, which certainly isn't a compact object! Check out this one, done with just a DSLR and an 80 mm refractor: 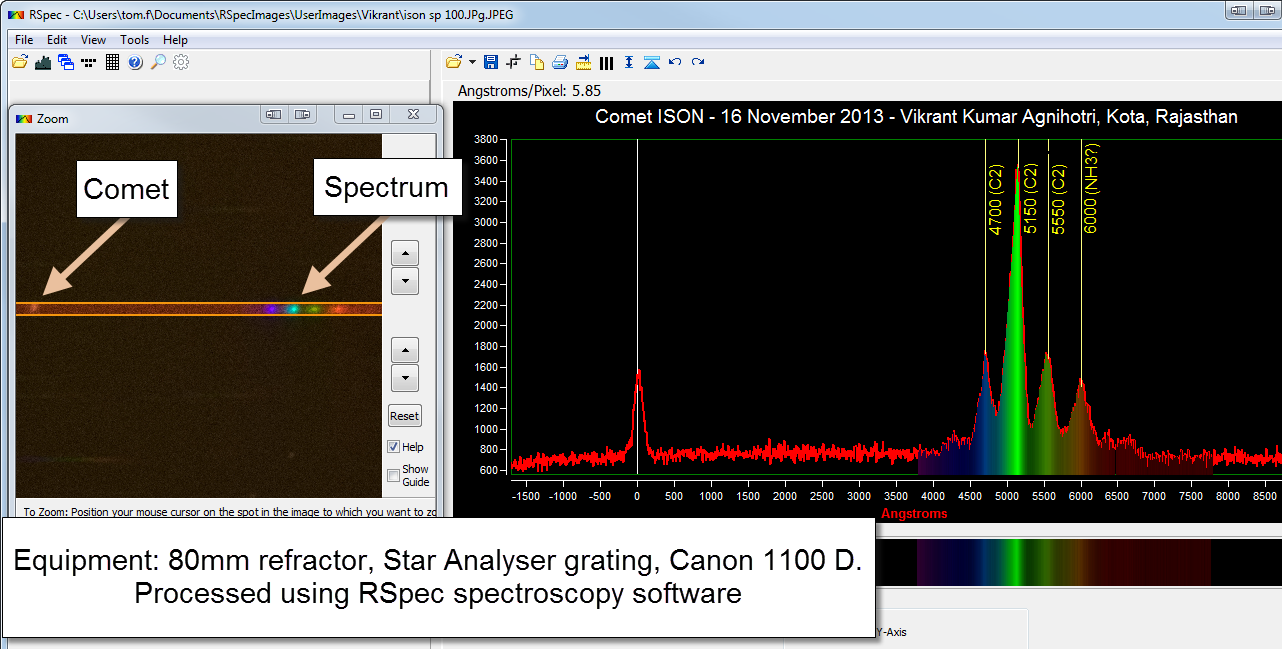 If you're interested in 3C 273, in case you missed it, there's a wonderful transcript of an interview with its discoverer, Maarten Schmidt here: http://www.aip.org/history/ohilist/4861.html. It's rather long. Search the text for the text "December 1962" for the relevant section. It's a fun read about how he made the discovery and his personal experience of the process.

Also see this: http://www.threehillsobservatory.co.uk/astro/spectra_21.htm. The designer of the Star Analyser grating has observed the red shift of compact galaxies with a video camera!

Not the answer you're looking for? Browse other questions tagged spectroscopy redshift .

4
Can Hubble red shift be interpreted as time dilation?
1
Is Blue Shift just as provable as Red Shift?
4
Why is there no time in the distance equation using Hubble constant, red shift and speed of light?
0
Does red shift need to compensate for space expansion
2
Are blue and red shift visible?
6
Sun's spectrum red shift
1
At what speed does something have to travel away from us for it to red shift enough that it becomes invisible to the human eye?
2
What equipment do I need to measure the spectrum of a star?
2
Is there still a red shift when moving perpendicular to the direction of incidence?