Is metallicity low at the central region or nucleus of the Milky Way?

Is metallicity low at the central region or nucleus of the Milky Way? Does metallicity decrease or increase as we move from the center out to the edges of our galaxy?

The stars in the Galactic bulge are predominantly metal-rich (by that I mean have a metallicity similar to the Sun or even a little higher).

Even though these stars are predominantly old, the bulge is thought to have formed extremely quickly and the interstellar medium from which the stars were formed would have been enriched with metals very quickly.

Here is a plot from Zoccali et al. (2009) (which I recommend reading). It shows the metallicity distribution of many stars in the Galactic bulge, measured using high-resolution spectroscopy. It shows that the highest metallicity stars are towards the middle (it is very hard to get samples right in the middle because of extinction) and the averge metallicity falls as you mover further from the centre (the samples with more negative Galactic latitude $b$.). The percentages in the plots are the estimated contamination from the disk population in each sample. 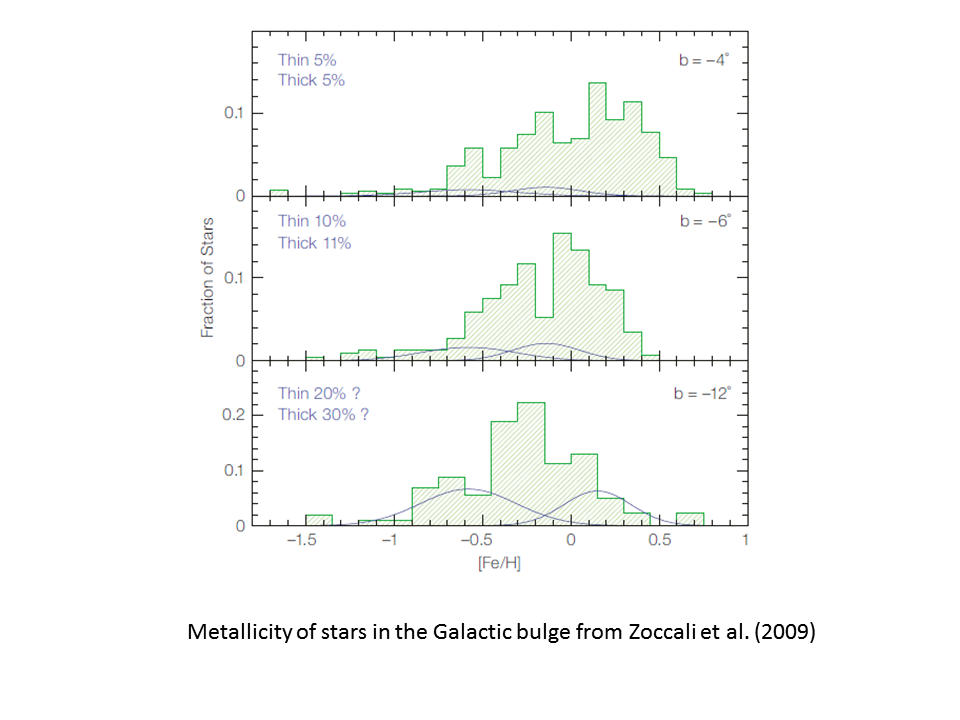 The dependence of metallicity on height and radial coordinate in the Galactic disk is still keenly debated. There is general consensus that the metallicity falls with radial distance from the Galactic centre and with height above the Galactic plane. The gradient is of order a few hundredths of a dex per kpc between a few kpc and 10-12 kpc from the Galactic centre. It may flatten beyond this. You could have a look at the discussion in Cheng et al. (2012), but there are many other attempts at parameterising the gradient and it is a technically difficult thing to do.

Not the answer you're looking for? Browse other questions tagged star galaxy milky-way galaxy-center metal or ask your own question.

5
Structure of the torus of the Active Galactic Nucleus
2
Question regarding the Milky Way when calculating galactic space velocities for galaxies
2
Black hole at Galactic Center of the Milky way and Bar of stars?
12
Why don't we see “the milky way” in both directions?
2
Why can I see the Andromeda Galaxy despite Milky Way's rotation?
0
In which direction does the Milky Way rotate?
1
What is that light of the middle of the milky way galaxy?
13
Is it true that we see the center of the milky-way for only half of the year?
4
How many supernovae events are on their way from within the Milky Way?