How to calculate conjunctions of 2 planets

So, the recent conjunction of Jupiter and Venus seems to have spawned lots of excitement over this "rare" event. But what I can't figure out, is exactly how rare it is. And I've seen such conflicting claims and calculations that I figured I'd better calculate it myself. The only problem is I'm no astronomer. So, does anyone know of a program that can calculate all the conjunctions between a date range that are within a degree of each other? Or does smart person know how to calculate it manually? :) I have a program called Stellerium which I've been using to view the various conjunctions that people have mentioned. I don't know if I can use it in the way I need it though. Any help? :) Thanks

Summary: I'm still researching, but there appears to be no well-known, reliable non-iterative method to find conjunctions. Using the iterative method and the C SPICE libraries, I created a table of conjunctions for the visible planets (Mercury, Venus, Mars, Jupiter, Saturn, Uranus) here:

I am still researching a general answer to this question ("How to calculate conjunctions of 2 planets"), but here's what I have so far.

This iterative process works, but can be tedious. Since planetary positions are semi-well-behaved, you'd think there would be a faster, non-iterative method. Well...

However, this also uses an iterative method, as the long description of the "step" parameter indicates:

"step must be short enough for a search using step to locate the time intervals where the specified angular separation function is monotone increasing or decreasing. However, step must not be too short, or the search will take an unreasonable amount of time"

In Astronomical Algorithms, Meeus has a chapter (17) on Planetary Conjunctions, but the chapter is less than three pages and lacks detail except that he's pretty clearly iterating and looking for the smallest separation, same as my Python program does.

He does a little better in Astronomical Formulae for Calculators: sounds like he's advocating iterating over big steps to find the place where the separation stops decreasing and starts increasing, then using "inverse interpolation" to find the exact time.

"Mathematical Astronomy Morsels" (also Meeus) talks starting on p. 246 about triple conjunctions (defined as two planets having several conjunctions in a short time, due to retrograde motion, not three planets all in conjunction at once) and gives some examples for very specific pairs, like Jupiter and Saturn, with ways you could look for those conjunctions.

It doesn't look like any of these books would be very helpful in finding a non-iterative solution.

As far as NASA computed planetary/stellar conjunctions/occultations, I don't know of anyone within NASA that does that routinely. There is an external network of volunteers that does that under the umbrella of the International Occultation Timing Association (IOTA), and they have developed pretty refined internal software for that purpose.

[...] the software package Occult does generate planetary conjunction predictions - based on a two-body solution. The approach used is a crude brute-force method of generating the planetary ephemerides on a daily basis. It is not particularly efficient - but it is sufficient for its intended purpose. [...]

I'm using a very time consuming iterative approach to pre-calculate Bessel Elements for conjunctions. This allows fast online calculation for any place on earth. Initial calculations are only done every few years, so CPU time does not matter. This would change if I'd enter the business to calculate asteroidal occultations.

However, if you use Mars' barycenter, this becomes:

In other words, NASA computes the position of Mars' planetary system barycenter for a much longer interval than they compute Mars' actual position. Since I wanted to compute conjunctions for a long period of time, I went with the barycenters (DE431 computes barycenters even beyond 9998 BC and 9999 AD).

I've complained that this is silly, especially for Mars, since the distance between Mars' center and Mars' planetary system barycenter is only about 20cm (yes, centimeters, since Phobos and Deimos have very little mass) per http://naif.jpl.nasa.gov/pub/naif/generic_kernels/spk/planets/aareadme_de430-de431.txt. However, NASA apparently plans to keep it this way.

More details on how I generated these tables (in highly fragmented form):

(README.conjuncts in the above is a good starting point)

Some of the "cooler" conjunctions I found are at: http://search.astro.barrycarter.info/table.html. Here's a screenshot: 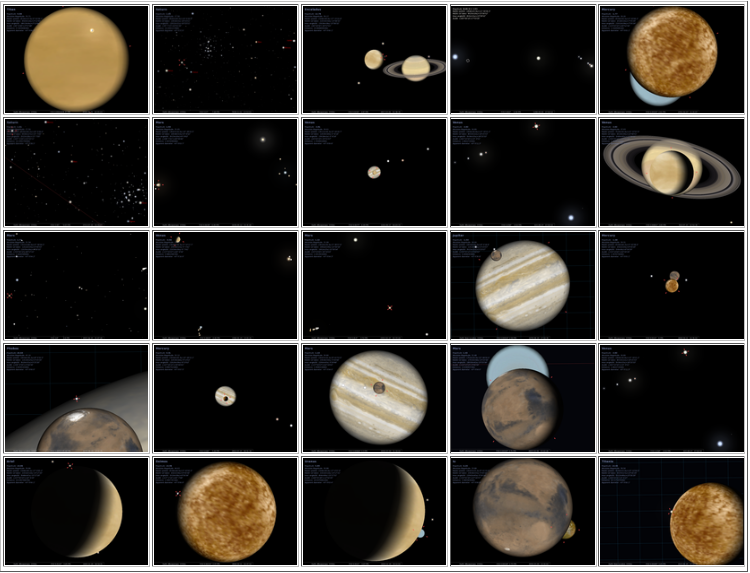 The PyEphem library allows you to create Python scripts that could calculate any conjunction you want (and many other things besides that).

Here's a script that already does that:

Here's the result of running that script now:

Notable event: extremely close conjunction between Jupiter and Venus in 2016:

I worked out this equation to determine the cycle length between conjunctions of two planets:

a = year length for lower-orbit planet, in Earth days

b = year length for higher-orbit planet, in Earth days

$P1$ is the revolution time of a celestial body like a planet, asteroid etc. By substituting Jupiter and Saturn data we find it's 19.8 years

Not the answer you're looking for? Browse other questions tagged jupiter venus .

9
Has the conjunction between Venus, Jupiter, and Regulus only occurred twice in 2,000 years?
3
Venus-Saturn conjunction in Sagittarius on Dec 11, 2019 - How often does this happen?
2
Finding Quintuple Planetary Alignments with SkyField
3
Calculating and mapping the best visibility of celestial occurrence

18
If Venus and Mars changed places, would we then have 3 habitable planets?
8
Composition of planets' core
5
How fast does Venus move as seen from the earth?
7
Effects of the solar tide on planets
0
Birth of the Gas Giant Planets?
1
How frequently do Jupiter & Regulus have triple conjunctions?
5
Are the Jupiter-Saturn conjunctions and winter solstice related?