Who invented the blink comparator?

The Wikipedia page for the blink comparator fails to mention who invented it. Many other pages extol the importance of the device, but we cannot find any mention of an inventor.

Wikipedia does mention that Ben Mayer invented the The Projection Blink Comparator (PROBLICOM), which is a low-cost improvement on the blink comparator. However, he did not invent the original device.

It would appear to have been developed by Carl Pulfrich working for Zeiss in 1904.

Alternatively Max Wolf in 1900 again working with the Zeiss company.

Looks like the idea was Wolf's and the realisation Pulfrich's. From the second link we have:

Wolf was a codeveloper of the stereo comparator together with Carl Pulfrich from the Zeiss company. The stereo comparator consists of a pair of microscopes arranged so that one can see simultaneously two photographic plates of the same region taken at diff erent times. Wolf seems to have experimented with such techniques as early as 1892, but without success. When Pulfrich approached him to adapt the technique from geodesy to astronomy, Wolf was delighted. A steady exchange of letters followed. Wolf and Pulfrich then worked together to analyze the rapidly growing accumulation of photographic plates. Tragically, Pulfrich lost one eye in 1906, preventing him from using the stereographic tool from then on.

I don't know if the loss of an eye (mentioned in this answer) is related, but there is a one-eyed embodiment described in the 1909 patent US941812, Telemeter for two successive observations.

"Another arrangement of the telemeter, in which the two images are produced successively in a common image field filling the entire ocular field, seems to be still more advantageous." 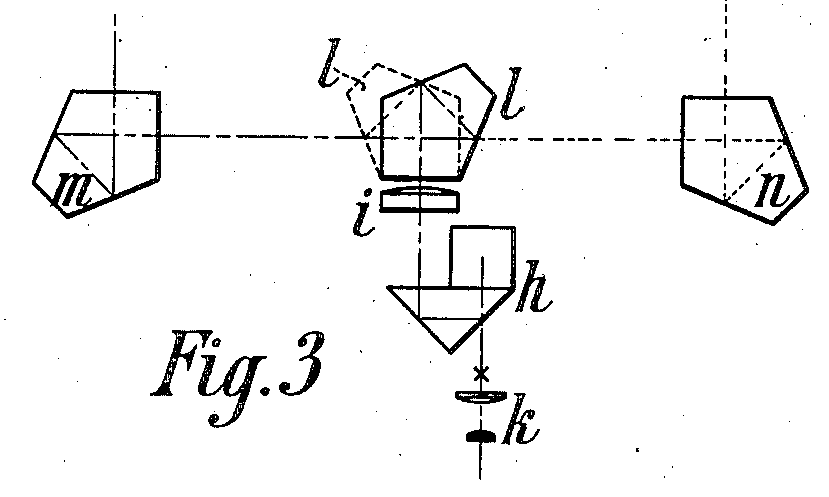 Thus it seems the comment at the bottom of the the first page in this article might not be 100% correct. I don't know the date, but the one-eyed blink comparator in Wikipedia looks pretty darn old!

"Tragically, Pulfrich lost one eye in 1906, preventing him from using the stereographic tool from then on."

The full quote can be found in the other answer. 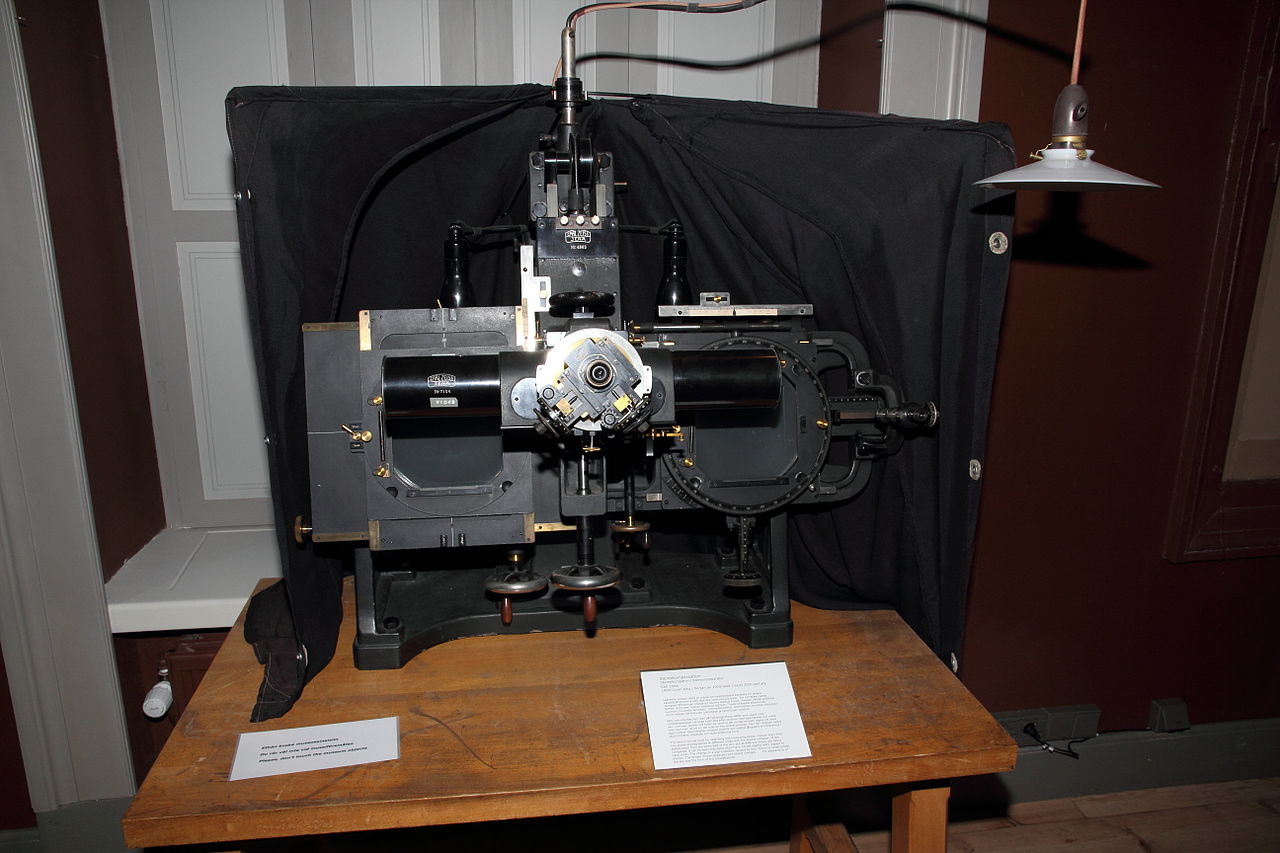 above: "English: Blink comparator in the Meridian hall of the Helsinki observatory. Made by Carl Zeiss in early 20th century." from here 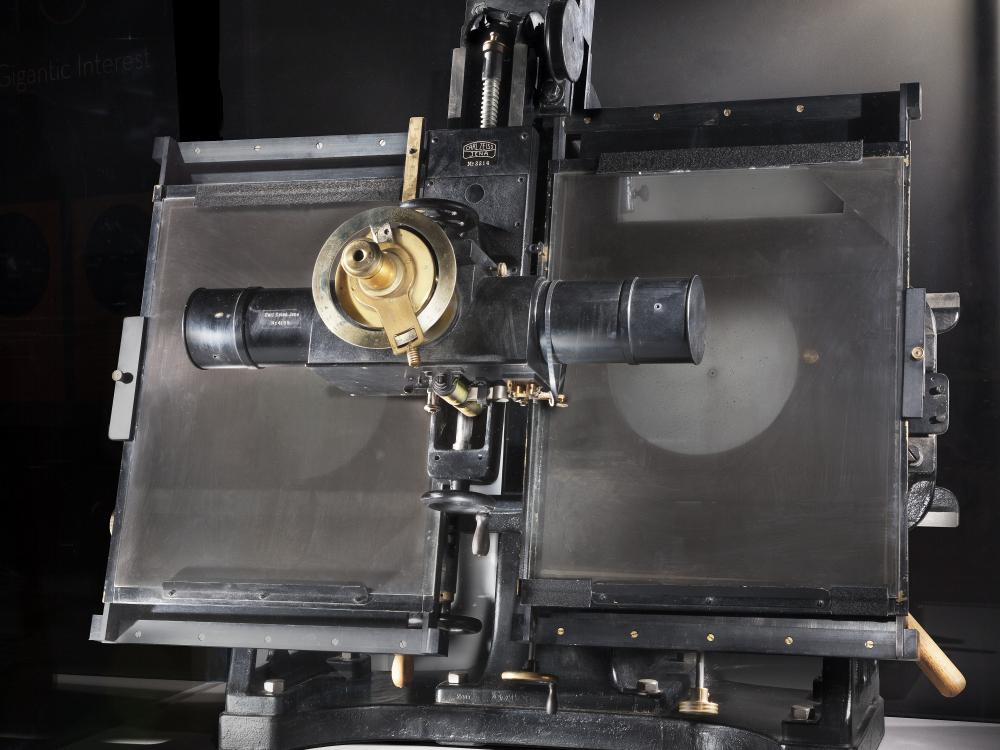 above: from Finding Pluto with a Blink Comparator

A blink comparator was a viewing apparatus used by astronomers to find differences between two photographs of the night sky. It permitted rapidly switching from viewing one photograph to viewing the other, "blinking" back and forth between the two taken of the same area of the sky at different times. This allowed the user to more easily spot objects in the night sky that changed position. It was also sometimes known as a blink microscope. It was invented by physicist Carl Pulfrich at Carl Zeiss AG, then constituted as Carl-Zeiss-Stiftung, in 1904

Not the answer you're looking for? Browse other questions tagged telescope history or ask your own question.

2
What is the name of a device for detecting moving objects?

4
How many judges sat on Galileo's trial over heliocentrism and who were they exactly?
0
When were the horizontal and equatorial celestial coordinate systems invented?
2
What's the origin of Clyde Tombaugh's 9-inch Newtonian telescope?
5
Who discovered Wolf 359?
0
Who coined the phrase "martian dichotomy"?
1
Why did the famous Multiple Mirror Telescope (MMT) get rid of them and become the Massive Monolithic Telescope?
15
Was lunar libration first observed or first predicted? In either case, who was the responsible party?