what planet is the most radioactive?

So as I understand it the source of most geothermal energy on Earth is due to radioactive decay. Jupiter is the most massive planet but if the bulk of it's mass comes from gaseous elements instead of heavier ones like uranium or whatever than it being the most massive might not necessarily mean it has the most radioactive material.

There's a few parts to this question, I'll give it a shot. Also, since you're asking about the geothermal energy of the earth, I'm going to ignore radiation from space and radioactive van allen belts (Jupiter has a very radioactive van Allen belt). Also, as voyager discovered when it left the solar system, there's more radiation in the form of cosmic rays out there, that the sun effectively shields most of the planets from.

But, because you mention the Earth's geothermal heat from radiation, so I'll focus on that.

Here's a very well answered similar question about radioactive elements inside the earth. what percentage of the Earth's core is Uranium

So as I understand it the source of most geothermal energy on Earth is due to radioactive decay.

A healthy share of Earth's core heat is from the planets formation. This is a pretty good article on that subject - http://physicsworld.com/cws/article/news/2011/jul/19/radioactive-decay-accounts-for-half-of-earths-heat, it says that of the current heat, about 50% is from the energy left from the formation of the planet and about 50% is from radiation - so the radiation is very important, but it's probably not the cause of "most" of the heat in the earth.

As far as I know, no similar studies have been done on any of the other planets.

Jupiter is the most massive planet but if the bulk of it's mass comes from gaseous elements instead of heavier ones like uranium or whatever than it being the most massive might not necessarily mean it has the most radioactive material.

That I pretty much agree with. The two primary differences between the 4 gas giant planets (or, two gas giant, two ice giants if you like) and the 4 inner rocky planets is that the gas giants formed outside the frost line and key difference #2, the 4 outer planets are much larger, so they were more able to hold onto more hydrogen and helium, which are the 2 most abundant elements in the solar system.

Also, any radioactive elements in the 4 outer planets would likely be well below their thick gaseous surfaces, so it would be difficult to detect, outside of Neutrino detection I suppose, and more trouble than it's worth to try to collect.

The 4 inner planets (and lets throw the moon in there as well, and asteroids if you like) are more interesting I'm assuming David Hammen's answer is correct in the linked question above, and that most of the Uranium on earth is in the crust or mantle, the highest percentage in the crust, and so that's probably true for any other rocky planet that formed and was, at one time, molten enough to circulate, so all the inner planets probably have similarly small amounts of uranium and other radioactive elements as Earth.

Mercury may have had much of it's crust and some of it's mantle blown off in a giant collision, and if that's the case, Mercury might have lost a portion of it's radioactive elements. Brief summary of that here, point #6: http://messenger.jhuapl.edu/faq/faq_science.html

unrelated footnote, but if Mercury's crust was blown off, it might be a good planet to mine for rare earth elements, or maybe asteroids will be easier, who knows, but I've always been curious of the mining possibilities on Mercury. Abundant solar energy too, but it's a hard planet to fly to because of the sun's gravity, so, maybe asteroids are the way to go for space mining.

The moon was also formed by a giant impact, so, the moon was formed by material from Earth's but it has a much higher percentage of mantle than the Earth, so it could have a higher percentage of Uranium and other radioactive elements than the earth. How well the Moon's material was circulated in it's cooling process is another question. Being smaller it probably cooled more quickly.

Venus and Mars, I see no reason why they shouldn't have similar percentages of radioactive elements than Earth. 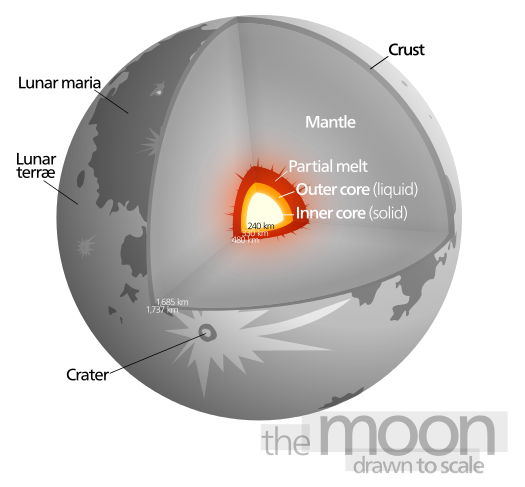 One way to look at this question is to investigate how quickly the other inner planets cooled. Far from exact, but that probably tells us something, since heat generated by radioactive decay inside the planet would probably lead to volcanism at some point. Even the Moon appears to have had volcanic eruptions as recently as 33 million years ago, so some ongoing internal heating seems likely.

Volcanoes on the moon

Size is also a key factor in what keeps the inside of a planet hot, and in some cases, tidal heating (Io, Enceladus), but that's not really relevant to this question.

Neither Mars nor Venus are volcanically active like the earth, but Olympus Mons may have erupted as recently as 25 million years ago, and there is evidence of large lava flows on Venus. As to how big a role radioactivity plays in heating up the cores of those 2 planets, I don't know precisely how much.

Overall, I think this is a good question on planet cores and radioactivity, as the inside of the planet is just as interesting as the surface, well, to me, at least. I know this doesn't answer your question specifically as to which is the most radioactive, cause I don't know, but I like the question.

Jupiter is the most radioactive planet. It has the greatest Electromagnetic field of all planets in Solar system according to Juno space mission ( https://en.wikipedia.org/wiki/Juno_(spacecraft) ). When we know the size of Jupiter it is obviously logical that it must contain farther most mass of radioactive elements like uranium.

Not the answer you're looking for? Browse other questions tagged solar-system planet radiation or ask your own question.

8
Is there a natural process by which hydrogen is generated from heavier elements in the cosmos?
2
Which is the most early type star with a planet discovered by radial velocity method?
31
Why do (most of) the planets rotate counterclockwise, i.e. the same way the Sun does?
0
Could there be another planet between Mercury and the Sun?
15
What wavelength to best detect the “9th planet”?
7
Ninth planet - what else could it be?
8
Why has Saturn stopped contracting gravitationally?