Does Pluto have impact craters? 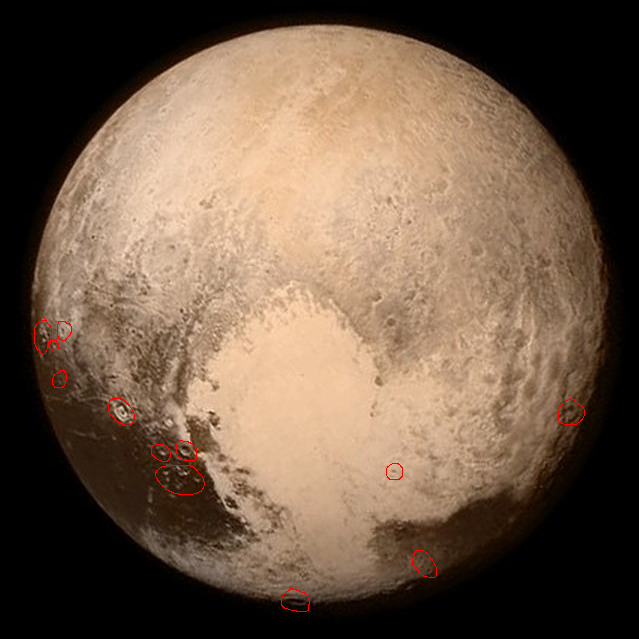 It was predicted by some, before the images arrived, that Pluto's craters would be much shallower than perhaps on other rocky objects/satellites. The reason is the icy composition and the relatively low impact velocities in the outer solar system (Bray & Schenk 2015).

There are indeed reported quotes in recent days that there are no impact craters on Pluto (e.g. here or here), based on the highest resolution images.

However, I'm with you - the things you have marked look like very large impact craters, or the remains of them, and so what we are seeing is that there are no small ones.

The gist of what I have heard/read is that this indicates geological activity on Pluto, which is effectively removing the evidence of relatively small impacts and that the surface we see is mostly younger than 100 million years old. Watch this space, a lot of people are just flapping their lips at the moment (including me).

Another possibility - raised by Wayfaring Stranger - could be that the expected number of impacts was (hugely) overestimated. This is discussed by Singer & Stern (2015). There are indeed uncertainties, and it is hoped that cratering on Pluto & Charon would help constrain the number densities and size distribution of small impactors. My impression is that the uncertainties could be at levels of up to factors of 10 - and this seems to be discussed quite carefully in Greenstreet et al. (2015) (behind a paywall, sorry), who also comment in the abstract that surface ages judged from cratering are " entirely dependent on the extrapolation to small sizes [of the impactor distribution]".

Further Edit: LDC3 suggests all the craters could be too small to be seen. The high resolution images that have been released could resolve craters of a diameter of a couple of km or more and cover a few percent of the surface. According to Singer & Stern (2015), the number of craters at this size and above on Pluto they expected in such an area is $\sim 1000$. So I think that either the planet has been resurfaced recently, the craters have been eroded in some other way or their estimates for the number of impacts/size of the impactors is wrong.

Further imagery has confirmed billion year old surface with impact craters on one part and younger which is very recent and smooth on another part.

Jeff Moore, of the New Horizons team has said. â€śWe now know Pluto has some surfaces that are a billion years old,â€ť

Edit... new estimate quote from NASA: Based on the lack of impact craters, scientists suspect the surface of Pluto is less than a few hundred million years old, Read more at http://newsdaily.com/2015/07/nasa-spacecraft-shows-pluto-wrapped-in-haze-ice-flows/#ytDT3emJZSKRbL7b.99

He expects that the bulk of the data that he wants to study wont have been beamed back before early 2016. Large scale image: 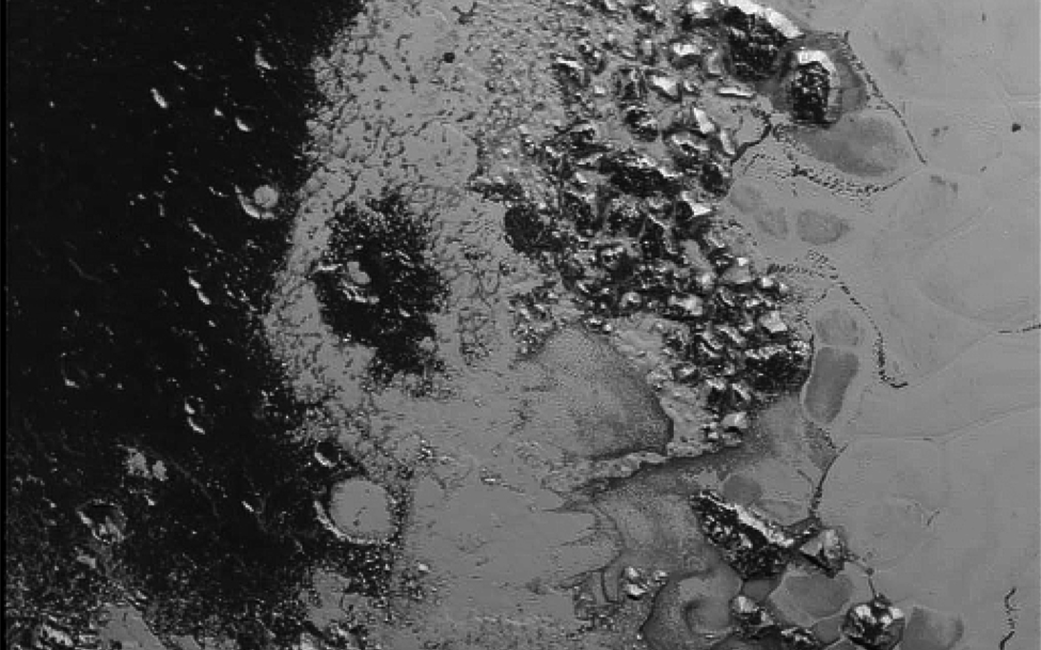 Not the answer you're looking for? Browse other questions tagged pluto .

8
Have Pluto or any of its moons been mapped?
15
Do Pluto and Charon have unusual Lagrange points?
8
why does pluto have a high orbital inclination
4
How much more massive would Pluto have to be to clear its neighborhood?
8
Could Pluto and Charon have extra-Solar origin?
1
Size of Sun as seen on Pluto
1
Can New Horizons probe turn back and start orbiting Pluto
4
How much is the zoom of Sun-Pluto eclipse image
6
Will Pluto ever clear its path?
2
why the difference in resolution for images of Pluto?