What is a “jumping trojan”? And what do their orbits look like?

" the object is actually a jumping trojan, is jumping from the Lagrangian point L4 into L5 via L3."

So some asteroids not only oscillate between L4 and L5, between being trojans or greeks, but even go via L3, on the opposite side of the Sun? Are their orbits circular as Neptune's (in this case) or highly eccentrical? How could an object in the same orbit as Neptune have another orbital period than Neptune? Or how else can it migrate between L3, L4 and L5?

EDIT: I'd like to add these illustrations because I think they illustrate well how a regularly orbiting object seems to "stay" longer at L3, L4, L5. (I'm not sure whether "jumping trojans" have some significant other characteristics, though). 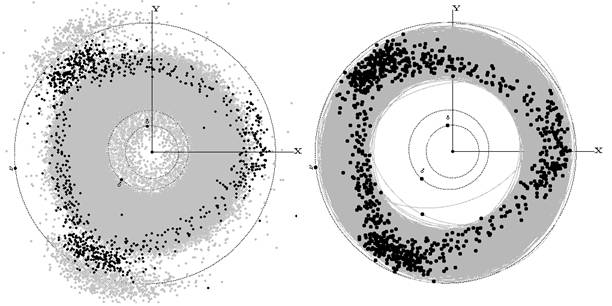 In short, most of the trojans stay orbiting arround L4 or L5. These can be called tad-pole orbit asteroids.

There are some trojan asteroids, however, that their orbit never get's too close to L4 nor L5 to get trapped and have a tad-pole orbit, or they do but they have too much energy to get trapped.

These trojan asteroids have larger orbits, following a path like:

There is, however, a third kind of trojan asteroid. This one appears to follow a tad-pole orbit (I.E. arround L4), but numerical analysis proves they will eventually adopt a horseshoe-like orbit. When they reach the other stable point (L5) they will get trapped again in a tad-pole orbit. This kind of orbit is very rare (rarity decreases as planet mass increases) and could be considered (personal opinion) as an hybrid tadpole - horseshoe orbit.

"Jumping mechanisms of Trojan asteroids in the planar restricted three- and four-body problems" from: Kenta Oshima and Tomohiro Yanao.

Are their orbits circular as Neptune's (in this case) or highly eccentrical?

L4 and L5 stability is rather narrow 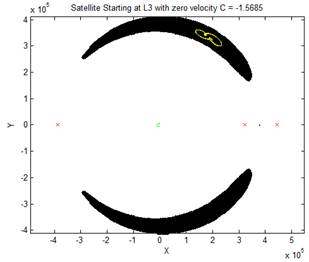 A more elliptical or eccentric orbit in resonance with a planet with a circular orbit would reach well outside of L4 and L5 and wouldn't be an L4 or L5 object. (though I have to admit, a planet's eccentricity and the effect that has on L4 and L5 stable zones has gotten me curious), but they would likely need to be pretty close to the same eccentricity or it wouldn't be L4 or L5.

Earth's curious orbital partner 3753 Cruithne probobly isn't stable, long term anyway. It's elongated as you describe and it could be stable for a long time, perhaps millions of years but it's not an L4 or L5. 3753 Cruithne has an orbit around the sun of 364 days, so it, in effect, laps the earth every 364 years, rarely coming close enough to hit or significantly change it's orbit cause it's on a different orbital plane.

For an object go from L4, past L3 into L5 it would need to be orbiting slightly faster than the planet.

Now, that object oscillates between L4 and L5, that would be more exotic and much harder to explain. But passing though L3 is possible if the object is orbiting slightly slower or slightly faster than the orbit of the planet. It could be a Jupiter or other planet's resonance that's causing it, but that's just a guess.

How could an object in the same orbit as Neptune have another orbital period than Neptune? Or how else can it migrate between L3, L4 and L5?

Saying an L4 or L5 object has exactly the same orbit as the planet is probobly inaccurate. The planet tugs on the L4 or L5 object anyway, so there's kind of a dance with Trojan objects. It might average out to being the same orbit, but it's never precisely the same on any given pass. Tugs from other planets affect the dance too. Jupiter, Saturn and Uranus all probobly tug on Neptune's Trojans, throwing off the clockwork a bit.

Gather, no. Pass through, yes. L3 isn't stable, but that doesn't mean an orbit couldn't pass through L3 and be in a near L3 Orbit for several rotations around the sun, but it's not stable. An L3 orbit would tend to move away from L3. L1, L2 and L3 aren't stable, but they are still good points to put a satellite because less energy is needed to keep a satelite in those regions.

Hope that's not too clumsy an answer. My layman's attempt. I can try to clean up if needed.

It's also a Centaur, which means it's long term orbit is not stable. A true Trojan asteroid is stable.

and a map of EN65's orbit (has to be calculated, it's not been observed for nearly that long), but map below: 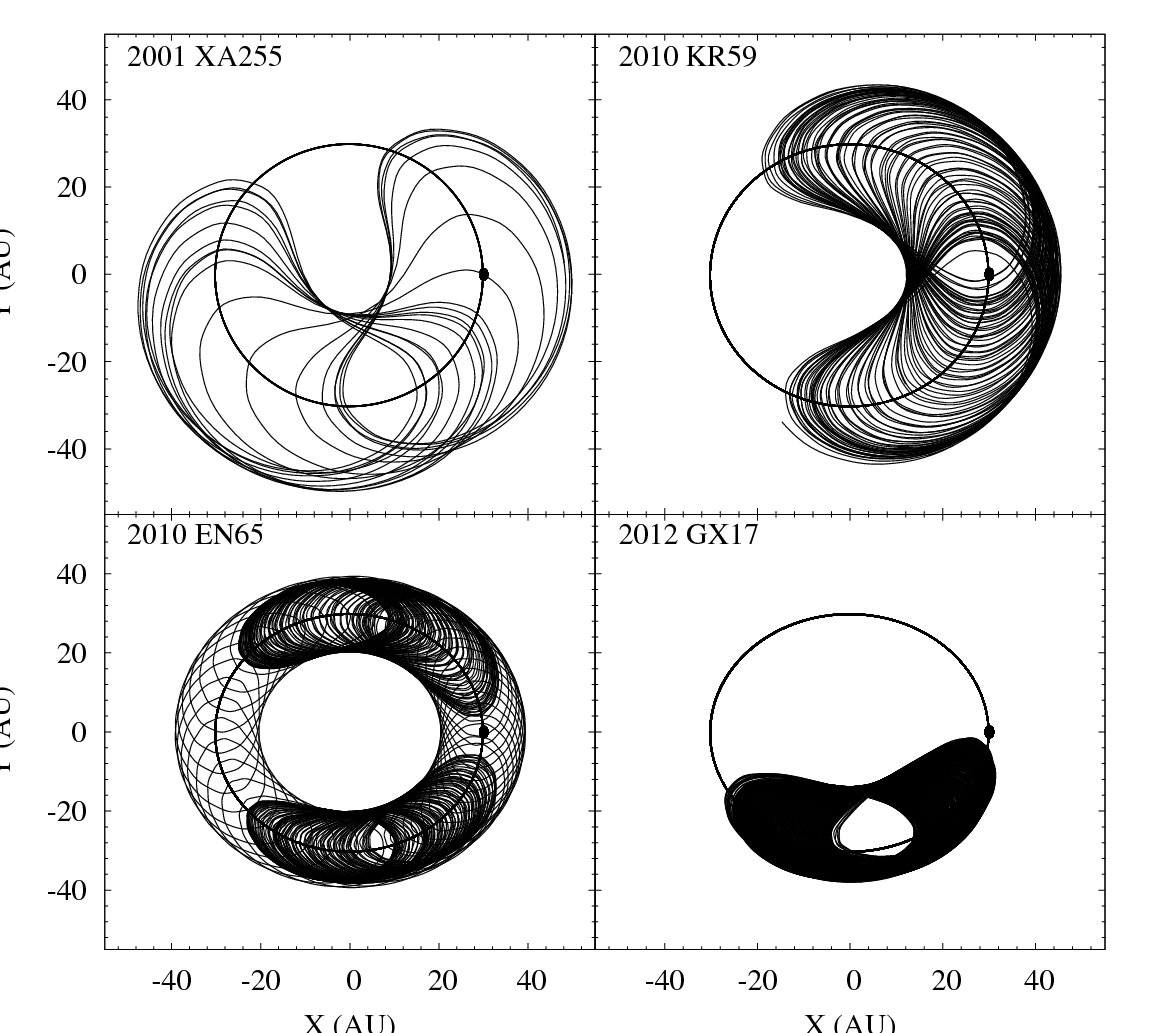 It's pattern looks similar to some of Earth's co-orbital asteroids, including 3753 Cruithne that I mentioned above.

So, that's probobly a more accurate comparison than Hildas. Look at 3753 Cruithne, or other planet's co-orbitals.

What confuses me - and I hope you forgive me for only enough to be dangerous, as they say, but what confuses me is that your original link says it's an elliptical orbit but it also seems to be drawn to both L4 and L5, spending more time there, so I might have been incorrect in suggesting the elliptical orbit wouldn't be possible. - sorry bout that. At least, some additional eccentricity seems likely, but I'm guessing, probobly not a huge amount. If I was to guess, I'd guess that EN65 is less eccentric compared to Neptune than 3753 Cruithne is compared to Earth. 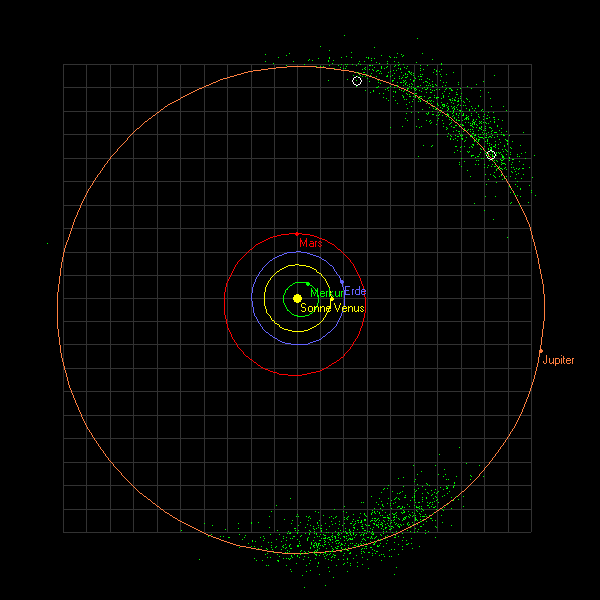 and you'll probobly notice, there's one point at (or, perhaps more accurately, passing through) L3.

Not the answer you're looking for? Browse other questions tagged lagrange-point orbital-migration neptune trojan-asteroids or ask your own question.

16
What are Trojan Asteroids and where are they located?
6
Are there sufficient observational data to measure non-Newtonian perihelion advances of any Asteroid and Comet orbits?
4
Before Voyager 2, what were the highest quality photos of Uranus and Neptune?
2
Why do these Hubble images of Neptune look like Cheela?
9
Orbits of Trojan Asteroids