Is the Tombaugh Regio on Pluto visible from Earth?

Is the Tombaugh Regio on Pluto discernably visible from Earth ground based or Earth orbiting telescopes? And more generally, can surface features seen in Hubble images be matched with images from New Horizons? I can imagine a match from the image compilation I attach, with TR being the bright triangle, but is that intuition valid? 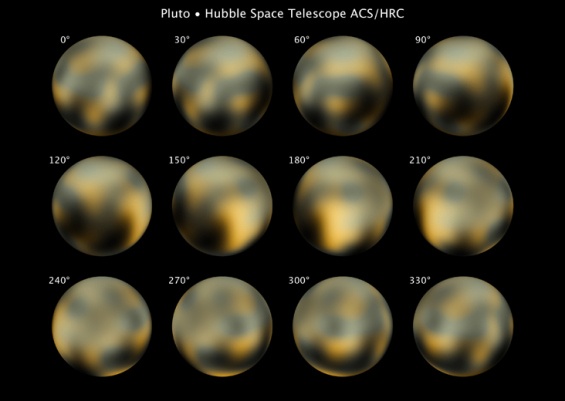 Your First Question - Can it be done from the ground?

Unfortunately making maps that have this level of detail from the ground is not possible with current telescopes. There are 2 problems; first, it takes a lot of magnification to resolve Pluto and even more to resolve surface features. Second, from the ground you need more than just magnification, you need EXTREMELY stable skies or that will wash out the surface features. Getting just one super sharp image is not enough, you need several to ensure that you have high enough signal to noise to believe the surface features are real.

This is why Marc Buie, who used the High Resolution Channel on the Advanced Camera for Surveys on HST to create the image you put in your question. Unfortunately, even that level of resolution is not possible anymore as HRC is no longer functional. These kind of maps can be very hard to make.

There have been other maps of pluto, both from the ground and using HST. Here is a compilation of several using a compilation of ground based photometry, the Fine Optical Camera on HST and the ACS HRC. As you can see from the ground based photometry you can make a map, but it is very poor resolution compared to what HST can do.

There have been other HST press releases about those other images

Second Question - How well do the maps match?

There is a good blog post about how they match up from the museum of applied arts and sciences at the Sydney Observatory. But the bottom line is that they match up pretty well, but not perfectly. This is expected as we expected volitle transport on the surface so the surface features will change. As you can see in the image below, that there were a lot of changes from the map made in 1994 to the one made in 2003. So one would expect changes going out to 2015. So, yes your intuition is valid, but Pluto's surface is dynamic so it will be changing on you!

Not the answer you're looking for? Browse other questions tagged hubble-telescope pluto space-probe or ask your own question.

13
Why is there a black stripe in the Hubble images of Pluto?
7
Does Pluto have impact craters?
4
How much is the zoom of Sun-Pluto eclipse image
2
Why weren't the Hubble light-echo images of V838 Monocerotis supplemented by ground telescopes?
8
Why was the (small) Hubble better able to find KBO targets for New Horizons than large adaptive optics ground telescopes?
8
Where exactly is the modification that first corrected the spherical aberration in Hubble's primary mirror?
6
Will Pluto ever clear its path?
33
Can Pluto be seen with the naked eye from Neptune when Pluto and Neptune are closest?