Temperature of the intracluster medium (ICM)

I've read once in an article that the temperature of the medium within galaxy clusters (the intracluster medium or ICM) is extremely high.

I second Pela's answer, apart from one addition. The CMB and the intracluster gas do interact with each other via the inverse Compton effect, whereby electrons in the gas cool by giving their energy to CMB photons, increasing their energies.

This process, when applied to hot gas in the intracluster medium, is also known as the Sunyaev-Zel'dovich effect. This causes the brightness of the CMB to be different when looking towards a galaxy cluster.

The importance of this effect can be found in these notes by Mark Birkinshaw. Essentially, the S-Z effect when combined with X-ray images of the hot gas can provide vital information on the density structure and thermal structure of the hot gas. It also turns out that the comparison of the X-ray and S-Z properties of a cluster can yield a value for the Hubble parameter and provide other cosmological constraints (for example, see Planck results presented in Ade et al. 2015).

The answer to your first question is "Yes, the temperature referred to is the 'normal' temperature, reflecting the average kinetic energy of the gas particles".

The answer to your second question is a bit more complex:

Gas cools by various processes, with an efficiency depending on the temperature, the density, and the composition of the gas. At "low" temperatures, most cooling happens because particles collide and their kinetic energy is used to excite or even ionize atoms. The atoms subsequently recombine or de-excite, emitting radiation which can carry energy away from the system.

Most of the gas in the Universe is hydrogen, which cools most efficiently around $10^4\,\mathrm{K}$. At higher temperatures, helium becomes the major contributor. Additionally, various metals contribute at various temperatures depending on their density and ionization state. At very high temperatures ($\gtrsim10^7\,\mathrm{K}$) where the gas is highly ionized, cooling mainly happens through bremsstrahlung, i.e. deceleration of charged particles by other charged particles.

The figure below (from Mo, Bosch & White 2010) shows the cooling function for various metallicities (with my own annotations): 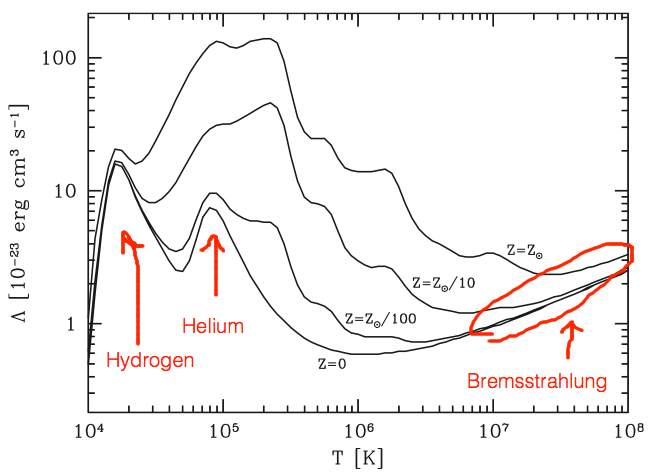 So what makes the intracluster medium (ICM) different from the interstellar medium (ISM)? In the expanding Universe, overdensities try to contract. These overdensities can reach hydrostatic equilibrium only if radiative cooling is small. If the cooling timescale $t_\mathrm{cool}$ is much smaller than the free-fall timescale $t_\mathrm{ff}$, it can collapse and form stars. From the virial theorem, which gives the relation between potential and kinetic energy of the system, you can calculate the relation between the two timescales. It's a bit too much math for this post, but not difficult. I recommend reading chapter 8.4 in Mo, Bosch & White (2010). Their Fig. 8.6 shows a cooling diagram with the locus of $t_\mathrm{cool} = t_\mathrm{ff}$ in the density-temperature plane: 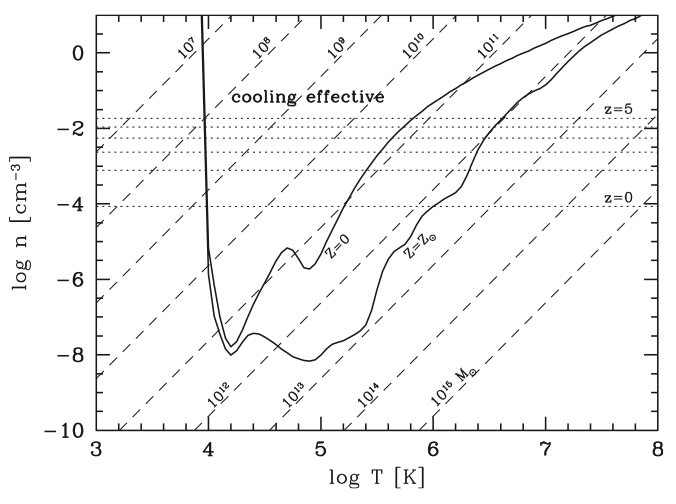 Above the locus, cooling is effective, and the cloud can collapse. The tilted dashed lines are lines of constant gas mass. Now you see that even for solar metallicity (the $Z = Z_\odot$ line), clouds of gas masses larger that $\sim10^{13}\,M_\odot$ are unable to cool. This is the fundamental difference between a galaxy and a cluster. They are both overdensities that resisted the expansion, but the gas in the cluster is not able to cool and form stars.

When people talk about "voids", they usually refer not to the ICM — which is the hot and dilute gas between the galaxies of a cluster — but to the immense regions of even more dilute gas which are… well, void of galaxies. Take a look at this image (from here). Here, I marked clusters with green and voids with purple. I also marked some filaments with cyan. 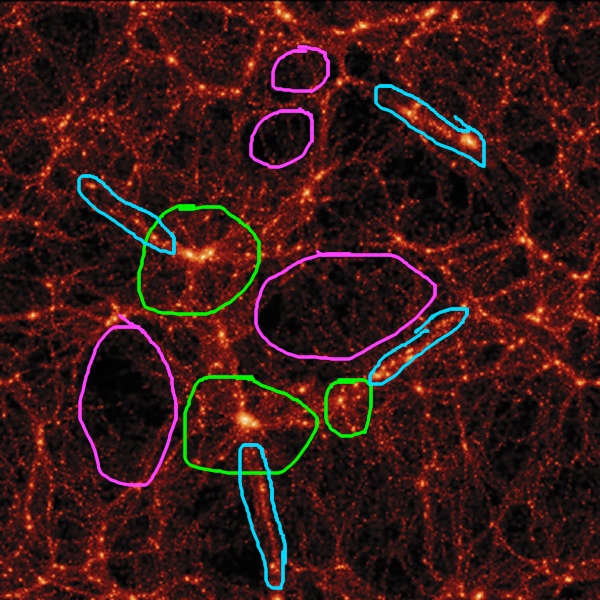 As for your last question, the ICM doesn't interact much with the CMB, so they're not in thermodynamic equilibrium, and there's no conflict. A small fraction (<10%) of the CMB photons does interact. This doesn't change the state of the gas, but it tends to polarize a fraction of the CMB, and this we can use to study the ionization history of the Universe.

EDIT: I forgot about the Sunyaev-Zel'dovich effect, which is the interaction of hot electrons with CMB photons. Rob Jeffries discusses this in his answer.

Not the answer you're looking for? Browse other questions tagged temperature cmb galaxy-cluster or ask your own question.

8
Why can't a quasistar exist now?