Orbits in a binary star system

Is there a fourth set of stable orbits, around the mutual center of gravity, but inside both stars' orbits? 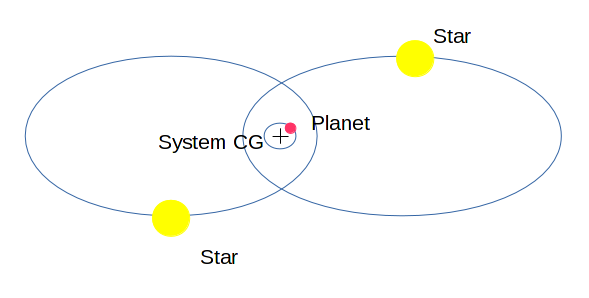 The point you appear to refer to, is called the Lagrangian point $L_1$. This point is a saddle in the field of gravity, hence not to be considered to be stable in the strict sense. Two other Lagrangian points, called $L_4$ and $L_5$, can be stable, provided the considered orbiting objects are of small mass in comparison to the two main bodies of the system, and if the masses of the binary components are sufficiently different.

According to theorem 4.1 of this paper, $L_4$ and $L_5$ are stable in all directions, if and only if the mass ratio of the two main binary components $\frac{m_1}{m_2}\geq\frac{25+3\sqrt{69}}{2}\approx 24.9599$. According to theorem 3.1 of the same paper all Lagrangian points are stable in z-direction, which is the direction perpendicular to the orbital plane of the binary system. (Credits for this corrected version go to user DylanSp.)

7
What's the name for [the other kind of planet] in a binary star system?