How common are exoplanets in distant orbits?

Are there many single transits in the Kepler data, which might be exoplanets with a longer orbital period than the time they have been observed for transits? Can any conclusions be drawn about how common they are? Is there reason to believe that the outer solar system is a common configuration? I suppose that slow moving planets are hard to detect also with doppler measurements. Will the upcoming telescopes aimed at nearby stars be able to find 10+ AU orbital radius planets?

There are many planets known which have orbits longer than the longest exoplanet orbital periods found by Kepler. These planets were discovered using the "doppler wobble" or radial velocity technique. The plot below (a few months out of date now) shows many planets orbiting with similar periods to Mars and Jupiter. The red points we discovered by transits (including Kepler planets), whilst the green were discovered by the doppler technique.

The sensitivity of current observational doppler techniques (shown by the blue line) means that so long as we observe for a sufficiently long time (decades, in order to see an oscillation in the radial velocity), we will be able to detect Jupiter-like (or even a bit lower-mass) planets out to much longer periods. 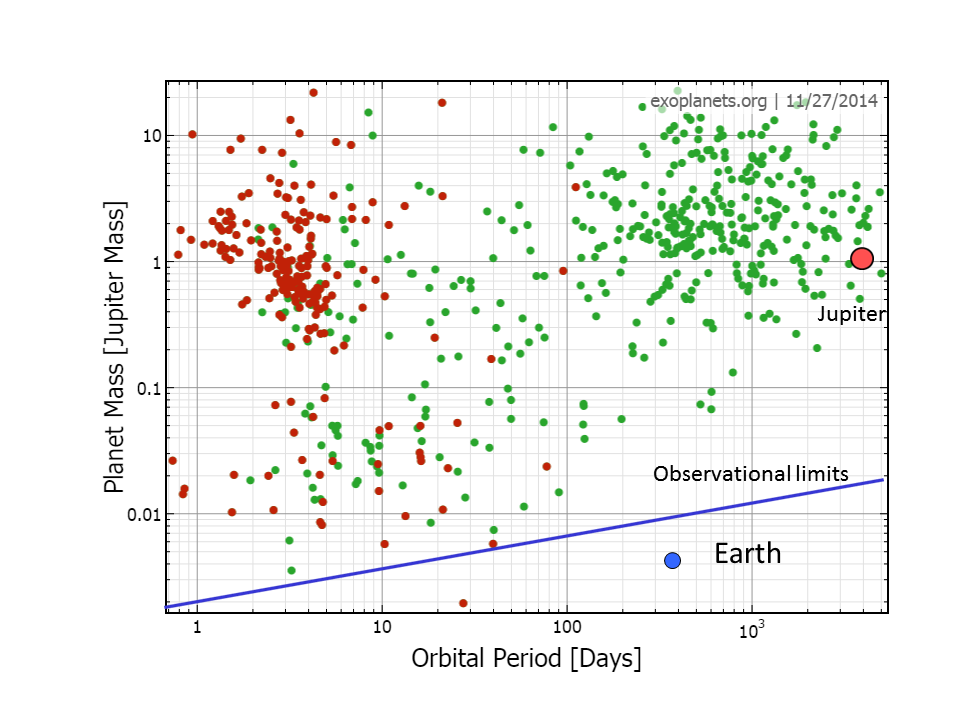 The frequency of planets in wider orbits is also probed well by surveys for gravitational microlensing.

Single transit events cannot be securely identified as being caused by planets. I think there are a number of other possible causes, both astronomical and instrumental, that might also be to blame. Nevertheless I'm sure somebody will analyse these in some statistical way at some point to draw some inferences, but at the moment, the securest data are from the radial velocity technique. These show that the solar system is not necessarily unusual at all - there are plenty of stars that have Jupiter-sized objects in Jupiter-sized orbits.

According to the review by Howard et al. (2013), from radial velocity surveys, about 10 per cent of G/K stars have a 0.3-10 Jupiter-mass planet in orbit between 0.03 and 3 au from the parent star and around 7% have a Jupiter-sized planet orbiting between 3 and 20 au. This latter number probably has a significant error bar at the moment, but it is consistent with the information from microlensing surveys (e.g. Gould et al. 2010). This latter paper has an interesting statistic in the abstract. they say that if all stars had a solar system like ours, they would have detected 18.2 "events" - 11.4 due to Jupiters, 6.4 due to Saturns and 0.5 Uranus/Neptunes; they would also have detected 6 "two-planet" events. In actual fact they detected 6 events, one of which was a two-planet event, and thus conclude that a broad-brush figure for the frequency of "solar system occurrence" is 1/6.

I know of two groups working on counting the number of long period Jupiter's in Kepler data (based on finding one transit only), but I haven't seen any results yet. Radial Velocities are the best way to answer your question because of the much longer timebase of observations.

Not the answer you're looking for? Browse other questions tagged orbit exoplanet kepler or ask your own question.

2
Types of Exoplanets
5
Are there any common characteristics of habitable planets?
4
What complementary observation campaigns have looked at Kepler's field of view?
1
Are exoplanets at dwarf stars less likely to have super-rotating atmospheres or asynchronous tidal locking?
3
Isn't it likely that most extra solar planets don't transit their star in line with the Earth?
2
Where is the exomoon? (Possible discovery of a companion to Kepler-1625b)
8
Estimates for “undetectable” planets in extra-solar systems
4
What's still needed before we can observe orbits of exomoons thereby weighing exoplanets?
1
What would be the year length of a habitable planet of 40 Eridani A?