For what I know, L4 and L5 are high points. Although, they are stable points. Why? I thought it was the same being a high point and being a unstable point. If I'm off-topic, please let me know where could I get an answer. Thanks. 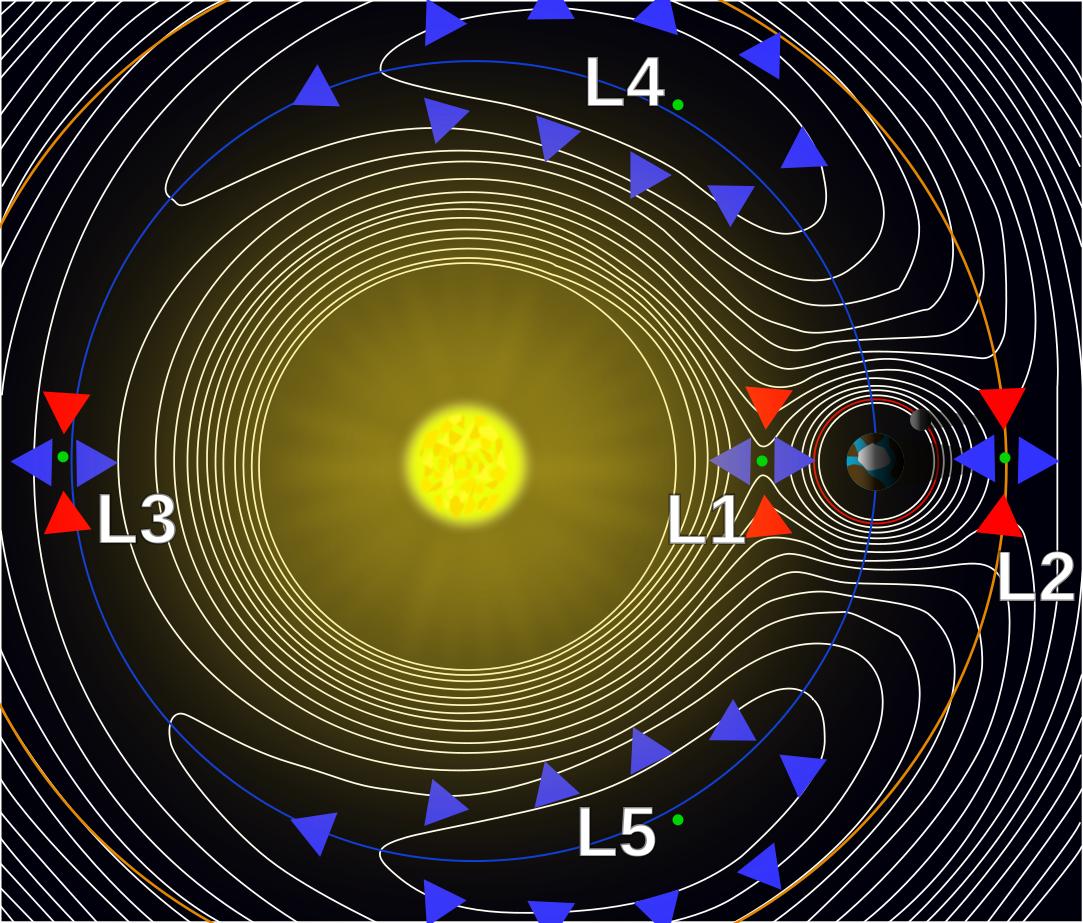 In the picture you can see that $L_1 - L_3$ are placed in saddle nodes, and intuitively one concludes that the smallest perturbation would set them "falling" in either direction, i.e. they need station keeping.

However, $L_4$ and $L_5$ would still seem to be unstable, so what gives? What makes $L_4$ and $L_5$ stable is that each of them is located equidistant from both of the masses. This leads to the gravitational forces from each of the bodies towards $L_4$ and $L_5$ to be in the same ratio as the two bodies' masses, hence the resultant acceleration points towards the barycentre of the system (which is also the centre of rotation for a three-body system).

This resultant acceleration, and by extension force, leads to the object in either $L_4$ or $L_5$ to in fact have just the correct amount of acceleration / correct force towards the system's barycentre so that it will not fall out of orbit (it "falls" towards the barycentre as the system rotates, like Earth similarly falls towards Sun throughout its orbit), as counterintuitive as it sounds at first. (Furthermore, this effect is not only limited to bodies of negligible mass, but is independent of mass, which is why you can have more massive bodies orbiting in $L_4$ and $L_5$ like Jupiter's trojans, as well as smaller, artificial satellites.)

Strictly speaking, the premise of your question is false. The L4 and L5 points in a general system are not necessarily stable. Whether they are stable or not depends on the ratio of masses in the system. It does turn out that in many systems of interest, the ratios are such that the these points are stable.

When they are stable, it's basically because the Coriolis force balances the gravitational force.

Not the answer you're looking for? Browse other questions tagged lagrange-point or ask your own question.

21
How stable are Lissajous orbits?
6
Maximum Amplitude of a Lissajous Orbiting Object in a L4 or L5 Position
14
Do Pluto and Charon have unusual Lagrange points?
1
What is a "jumping trojan"? And what do their orbits look like?
4
How (un)stable are the Lagrangian points 1, 2 and 3?
6
How can Earth-Sun Lagrange points L1 & L2 even be semi stable considering the moon?
1
How wide is the Moon's umbra and penumbra at EM-L2?
3
Lagrange points and the radius of the Hill sphere
10
Determining the area of Lagrange Points