Star like light moving in the sky, what could it be? [closed]

I was camping this weekend away from the city, so my friends and I decided to spend one of the nights watching the sky, since it's impossible to see anything around where we live. After a little while, of staring up, I saw what looked like a star moving. It moved fast, but not a long distance, and various directions and back. It was about the same size of the other stars near by. It was not as bright as other stars though. I stopped looking up for a little bit, to make sure my eyes were seeing things correctly. But then I looked up again I continued to see the light moving. I thought I was going crazy, so I pointed it out to my friend. It took him a little while, but after a few minutes he also saw it. His girlfriend also saw it a few minutes later. My friend brought up something about satellite reflections and other theories, but we have no idea what we saw.

So what could it be?

There was a object, apparently flying above you, that you couldn't identify. By definition this is an unidentified flying object. However this does not imply that it was an extra-terrestrial spacecraft.

UFO reports can be explained by a combination of:

There is no real way to decide what it was you saw. There are a couple of points in your report that are odd. You describe it as the same size as stars, but less bright. Stars have no visible size, and have many magnitudes of brightness. Your report suggests that you are someone who doesn't regularly observe the sky, and so is likely to be more susceptible to optical illusions and tricks that eyes can play on us.

The League of Lost Causes wrote the definitive How to identify that light in the sky? guide: 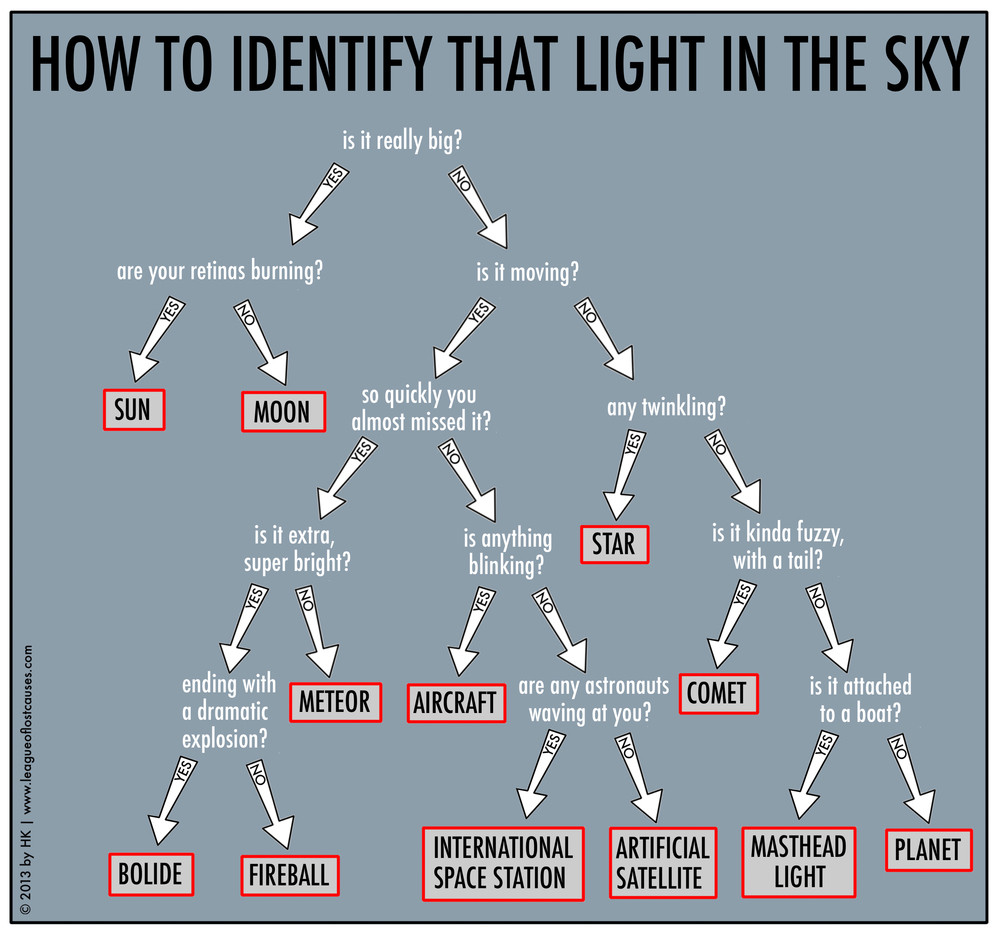 Most likely a satellite. They look exactly like stars, but they glide across the sky smoothly.

Airplanes may have multiple light sources, some blinking lights, and you can definitely perceive how low it seems to be: An airplane somewhat seems to come from the horizon and disappear the same way, while a satellite "seems to always be at the same distance from you", like gliding on an imaginary half-sphere or dome of a night sky covering you.

Last summer I went for a night bike ride for 6 hours and during this time, I spotted 12 satellites just by observing. They're a very common thing. This time I got very lucky though, because one of the 12 satellites unexpectedly was something called an Iridium flare and I had never seen one of those in real life before.

There's a lot of man-made space junk orbiting the Earth, some satellites still operated, some not. There's a bunch of satellites known as Iridium, which happen to have a design that includes large, reflective solar panels.
I live in the North so in the summer, the sun only barely goes below the horizon and the summer nights are short. When I'm just in the dark side but an Iridium satellite happens to fly approximately above me, if everything is in a specific angle, the sun from behind the horizon hits the satellite's solar panels, and like a mirror, reflects those rays to the dark side, into a viewer's eyes.
It was my first time seeing that and I must say, it's extremely impressive when you're merely looking at a "moving star", then unexpectedly it grows very bright, brighter than any star in the night sky, and finally reverts back to the normal looking gliding satellite.

Because people are very much aware of all of the space junk that's up there, there are plenty of websites and mobile apps that you can use to see where the most common satellites are at the moment, and, because we know the route of each satellite, as well as the year and location specific data regarding the Earth and the Sun, Iridium flares can also be predicted, like you would predict things like Solar eclipses.

Not the answer you're looking for? Browse other questions tagged star light or ask your own question.

3
Orange light that rises quickly and moves of to the righ
2
Moving lights in the sky looks like they were moving coordinated
3
Unknown moving light in sky
1
Please help explain this unknown light in the sky. Not ISS. Not a star or comet. Too slow
0
What are the small things, look like stars, moving in the sky?
1
A point of light moving between the stars
1
What object did I see in the sky?
0
Star like moving object in the sky
1
What are these objects on the night sky generally between 8:00 and 11:00 PM?
0
I saw an orange light in the sky which changed into flashing lights, what is this?
See more linked questions