What is the largest possible size for a brown dwarf?

What is the largest possible size for a brown dwarf before it has enough mass, capable of sustained fusion, thus becoming a star?

I think what you are asking is what is the radius of an object that has the maximum mass to be classed as a brown dwarf?

The mass threshold for this is about $0.075 M_{\odot}$. The boundary is a bit fuzzy - there is still some hydrogen fusion, but not enough to produce the luminosity of the object), it also depends slightly on the chemical composition of the object.

However, the fact that you can still see (with a telescope!) brown dwarfs raises a more fundamental problem with your question. Their luminosity comes from gravitational potential energy; they are contracting all the time.

So you can only ask what is the radius of the most massive brown dwarf at a given age?

The oldest (about 10 billion years, though there is no good way to estimate the age of a brown dwarf in the field, or measure its mass), most massive brown dwarf's should be about the size of Jupiter. A similar brown dwarf in a star forming region, born a few million years ago, should be several times bigger.

The plot below (from Nelson, Rappaport & Joss 1986 - newer models are available, but show the same behaviour) shows the radius of substellar objects as a function of time. The plateau at early times is caused by Deuterium fusion in object more massive than about $0.012M_{\odot}$. 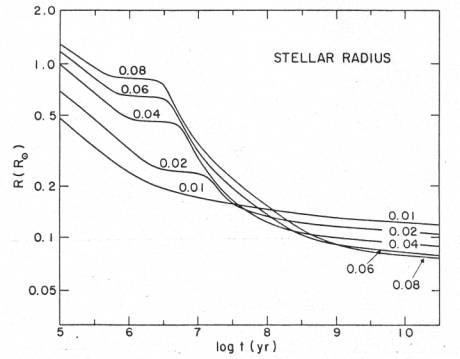 7
Mechanism for Brown Dwarf Fusion
0
Is it possible to have a star orbiting around a brown dwarf?
2
How do I understand a brown dwarf with a M-type spectrum?
3
How do we calculate heat flow or cooling rate for no fusion brown dwarf star?
3
Jupiter vs brown dwarf star
11
Is there a relation between mass, radius, and luminosity in deuterium-burning brown dwarfs?
2
Can a high enough density ignite a gas giant into a brown dwarf?
2
Would dropping a white dwarf or a "still-hot" stellar core into a large planet or brown dwarf create a star?
2
Brown Dwarf Sun: How dim can a star be in the visible spectrum and still provide enough heat for a planet to be habitable?
17
How can a brown dwarf be more massive than a star?