If I were to point into the sky, how many galaxies would be in this line?

If I point in the sky and draw a line from the tip of my finger to the end of the universe, how many galaxies would this line cross? I had a discussion with my dad and he said due to the universe being so empty the line wouldn't cross any solid matter. I said that the universe is so enormous in size that there would be many galaxies and stars crossing the line. Is this calculable? If yes which one is correct?

Take a look at the "Deep field" image from Hubble: http://www.spacetelescope.org/science/deep_fields/

You can see in this tiny part of the sky, hundreds of galaxies, but between there is lots of dark sky. Most lines of sight don't end on a galaxy. I'd say dad was right. I would estimate, from the deep field, that you have about a 1/10 chance of pointing at a galaxy.

This is probably a Good Thing. Olber's paradox supposed that if each line of sight ended on a star, the night sky would be a uniform blaze of light.

How thick is the line? An extended finger is about 30 arcminutes across, the size of the moon, but a line is a line, 0 arcminutes. The Hubble Deepfield, as mentioned by Kilfiger, is only 2.5 arcminutes across, 1/12th of a finger-width, yet contains hundreds of galaxies.

If you want to be a stickler for true lines, the image does contain dark space too. At a guess, there's not easily accessible software for counting such things, it looks like 70-80% blackness (ignoring obvious stars), so 1 chance in 5 your line is pointing at a galaxy.

On average, you will point at one galaxy.

The argument goes as follows:

Looking at the spectrum of quasars, which are effectively point sources, and which lie at distances of the order of the size of the observable Universe, it turns out that typically, roughly one damped Lyman $\alpha$ system (DLA) is detected. DLAs are huge reservoirs of neutral gas, which are early stages of galaxy formation.

At least in a handful of cases, the galaxy counterpart of the DLA has been confirmed. These observation are very challenging, since they are a faint sources at very small projected distances from the very bright quasar. Here's the setup: 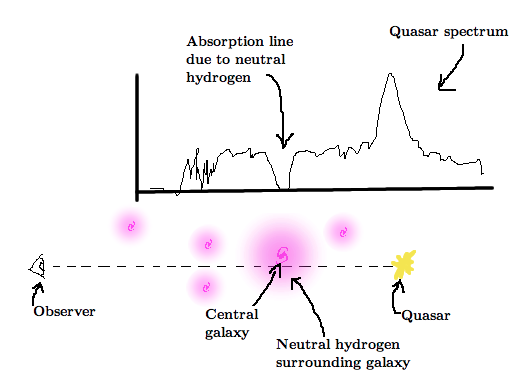 So, accepting a DLA as a galaxy, I'd say that you will typically point at one galaxy.

Actually we can't have an specific answer to that. Because we don't have enough knowledge about the size of the universe and the density of galaxies in other parts of the universe.

What happens if we are in a low density of matters but far from us we have a high density of galaxies and stars but we can't see them because of being too much far or being hidden from us behind something like Dark Matter or anything else.

Human are just guessing and are not too sure about anything.

5
What is a probability of a particle launched from earth hitting any object in the universe?

20
How many sun-like stars are there in the universe?
5
How many earths fit in the observable universe?
2
If the expansion of the universe is speeding up, how long until everything nears the speed of light, and what would happen?
0
If a star orbited another star, how would that affect parallax measurements of the other star from the vantage point of the first?
1
What was the process of calculating how much darkmatter/matter/dark energy the observable universe consists of and how did it come at this conclusion
8
Based off of the study that found the universe has a positive curvature, how big would the whole universe be?
6
Why would galaxies (and galaxy clusters) be unaffected by the expansion of space?