This question does not appear to be about astronomy, within the scope defined in the help center.

It is a said fact that 299792458 m/s is the speed limit,nothing can go faster than this speed, or it will take an infinite amount of energy for propulsion.What we perforce in vacuum is one thing.Can someone explain what will be observed(from the particle's frame and an observer frame at rest) if a particle of a non zero test mass moves at light speed inside a non vacuum medium(say water) as this velocity is definitely lesser than the limit. THANKS IN ADVANCE

Cherenkov radiation, also known as Vavilov–Cherenkov radiation,[a] is electromagnetic radiation emitted when a charged particle (such as an electron) passes through a dielectric medium at a speed greater than the phase velocity of light in that medium. The characteristic blue glow of an underwater nuclear reactor is due to Cherenkov radiation. It is named after Soviet scientist Pavel Alekseyevich Cherenkov, the 1958 Nobel Prize winner who was the first to detect it experimentally.1 A theory of this effect was later developed within the framework of Einstein's special relativity theory by Igor Tamm and Ilya Frank, who also shared the Nobel Prize. Cherenkov radiation had been theoretically predicted by the English polymath Oliver Heaviside in papers published in 1888–89. 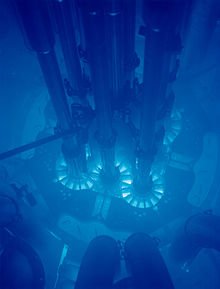 Not the answer you're looking for? Browse other questions tagged light general-relativity speed .

9
Does gravity slow or speed light up?
12
Why is the speed of light 299,792,458 meters/sec?
3
Does near light-speed travel doppler-shift the light from the target into gamma rays?
3
Could dark matter be considered a medium?
3
speed of light measurement
8
Can A Black Hole Exist?
28
How did Ole Christensen Romer measure the speed of light?