Can Pluto and Neptune collide anytime in future? [duplicate]

It's hard to find a good 2 dimensional representation, but Pluto and Neptune's orbits don't actually cross. 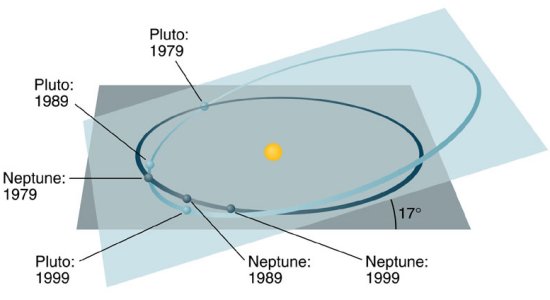 In fact, the orbits (not the planets but the orbits) never get within 100 million miles (I remember reading that, but can't find a link right now). This is because Pluto's orbit is on a different plane. It's easy to represent in 3D, hard to draw in 2D, but when Pluto is effectively the same distance from the sun as Neptune it's "below" Neptune, looking at the solar system from a sideways point of view. When it's on the same plane as Neptune's orbit, which it only crosses twice in one of it's years, it's further away from the sun.

An astronomer diagrammed the 2 objects orbits for the next 4 billion years and they don't intersect during that time. Source

But there is a quirk in the calculations. Pluto's resonance with Neptune is probably long term unstable and because of this, it's orbit could be subject to variations that leave open a Jim Carrey's chance of hitting Neptune. Source

It's very unlikely, because they're not on the same plane and they're not orbiting at the same period and they're currently in orbital resonance which they would need to fall out of to even have a chance, so it's a lottery ticket's chance of happening but it could theoretically happen, in a billion or couple billion years.

It's more likely that Pluto would fly past Neptune and have it's orbit changed, and even that's still a long shot. The most likely scenario is that they never get close, at least over the lifespan of the sun, but if they do get close, Pluto could fly further out into the solar system or closer in due to gravity assist. It might even hit Earth. But, I repeat, this is crazy-long-shot territory, but I think it's worth mentioning that it's about as likely to hit one of the inner planets as it is to hit Neptune. Jupiter being the largest, might have the best chance of being hit by Pluto.

The question is also answered here, but because everyone else was answering this question no, I wanted to point out that it's just barely possible but extremely unlikely.

30
Pluto's orbit overlaps Neptune's, does this mean Pluto will hit Neptune sometime?
5
Why the comets can cross the orbits of planets?
2
When and where are Pluto and Neptune closest to each other?

30
Pluto's orbit overlaps Neptune's, does this mean Pluto will hit Neptune sometime?
15
Planets and Pluto? Neptune?
0
Is there a theory / equation showing whether or not two passing bodies will go into orbit around each other?
10
Do all orbiting bodies eventually collide?
2
When and where are Pluto and Neptune closest to each other?
4
How much are Neptune's and Uranus' orbits perturbed by Pluto and other KBOs?
2
Is Jupiter really shepherding the main belt, and Neptune the Kuiper belt?
2
Moment of inertia factor of Venus and Pluto