Starting from the index you mentioned, I clicked through the links for some individual planets, which in turn link to discovery papers or other relevant observations. For planets around Kepler-23, -24, -25, -26, -27, and -28, the relevant papers are Ford et al. (2012) and Steffen et al. (2012), two out of a series of papers. Both papers used transit timing variations (TTV) and something called dynamical stability, which gives an upper limit to the mass of the planets such that the relevant n-body system is stable over long timescales. This leads to plots like the following (Fig. 3, Ford et al.): 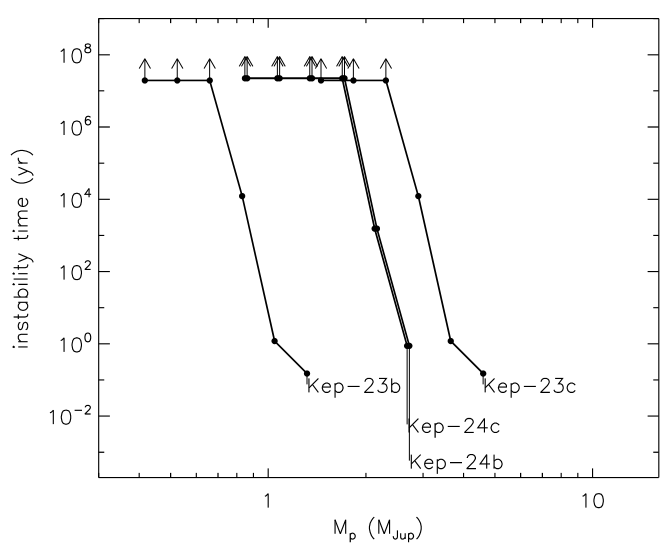 The arrows indicate simulations where the system was stable over timescales greater than $\sim10^7$ years.

Furthermore, shorter observations by Kepler also lead to larger uncertainties. Thus, the maximum masses of the planets as given in these simulations may very well be much greater than their actual masses. Steffen et al. have similar results, and they use a very similar method.

Kepler-39b is interesting. The paper NASA cites, Bouchy et al. (2011), states that the object is larger than one would expect, even taking into account that there is a large uncertainty in radius. It may be a fast rotator (see Zhu et al. (2014)), which would explain its oblateness, but that still isn't enough to explain the discrepancy.

Now, I referred to Kepler-39b as an "object", not a planet. NASA lists its mass as over 20 Jupiter masses; Bouchy et al. placed it at about 18 Jupiter masses, with a very low uncertainty. This could mean that it's more like a brown dwarf than a massive gas giant, and remember, the distinction is fuzzy when it comes to sub-brown dwarfs. This, then, may be the most likely explanation.

Not the answer you're looking for? Browse other questions tagged exoplanet mass data-analysis kepler density .

7
How are the masses of celestial bodies determined?
7
Maximum and minimum gas giant & ice giant densities
4
Reason for a correlation between Hot Jupiters and higher metallicity in Kepler data
5
How do star densities work?
7
Has the Kepler data been examined for light curves due to phase changes of non-transitting hot Jupiters and other?
8
How does NASA figure out orbital period and mass data for planets and other celestial bodies?
3
What is the densest known exoplanet?
0
Data base of exoplanets with common names to use beside Nasa Exoplanet Archive