In 2014, Robertson et al. made a case that stellar activity is masquerading as planets (here and here) for these well-known systems. In both cases, they claim that the only real planets discovered so far are planets "b" and "c". In 2015, Anglada-Escude et al. questioned the methods of Robertson et al. (here). Also in 2015, Brewer et al. suggested that there is evidence for multiple planets at Gliese 581 here (note, I only have access to the abstract - fulltext is here). Is there a direction that a majority of the professional community is leaning?

Going by multiple online exoplanet catalogues and a quick scan through the papers listed on the SIMBAD pages for the host stars:

At the time of writing, the Extrasolar Planets Encyclopaedia (http://exoplanet.eu), the NASA Exoplanet Archive (https://exoplanetarchive.ipac.caltech.edu) and the Exoplanet Orbit Database (http://exoplanets.org) are in agreement and list only three confirmed planets for this system: in order of increasing orbital period these are e, b and c. It's not just Robertson et al. claiming that d is an activity signal, see for example Hatzes (2016). The most recent RV study of the system I have seen is Trifonov et al. (2018) who give a 3-planet solution, not sure whether they searched for evidence of a fourth.

Gliese 581 is known to host a debris disc with an inner edge around 25 AU (Lestrade et al., 2012), much further out than c (or indeed any of the claimed planets beyond c), so I wouldn't be too surprised if there are additional planets to be found.

This one's a bit less settled because it doesn't seem to have attracted so many studies. Extrasolar Planets Encyclopaedia lists 6 confirmed planets, the NASA Exoplanet Archive lists 5 (they don't have planet d), while the Exoplanet Orbit Database only lists 2 (b and c). Again it is not just Robertson et al. claiming that there are only two planets, there's also the study by Feroz & Hobson (2014). The identification of planet d as being caused by the stellar rotation is supported by Suárez Mascareño et al. (2017) which is probably why this one was removed from the NASA list. Planet e is at roughly 2/3 of the rotation period and so is also considered suspicious. There doesn't seem to be nearly as much discussion about the outer candidates f and g.

Hope that helps as a summary. More data would definitely be useful for these systems if there is going to be any consensus, particularly for Gliese 667 C.

Update (June 2019): the recent study posted on the arXiv by Tuomi et al. brings back planet d, unfortunately they don't discuss this case in detail. Confusingly they also decided to swap the designations of planets d and e (at least they did in their tables, they kept the old name elsewhere in their text). They also include the 91-day planet d at Gliese 667C, also unfortunately without a detailed discussion.

Is there a direction that a majority of the professional community is leaning?

The Exoplanets Team maintains the "Extrasolar Planets Encyclopaedia" which is updated daily.

The UI is a bit fiddly on a mobile device but the raw data can be downloaded to desktop applications that are able to work with it. Links expire quickly so I can only post 'root URLs'.

If you use the variable star_name="GJ 667 C" for the search term on the webpage: http://exoplanet.eu/diagrams/ you can create this: 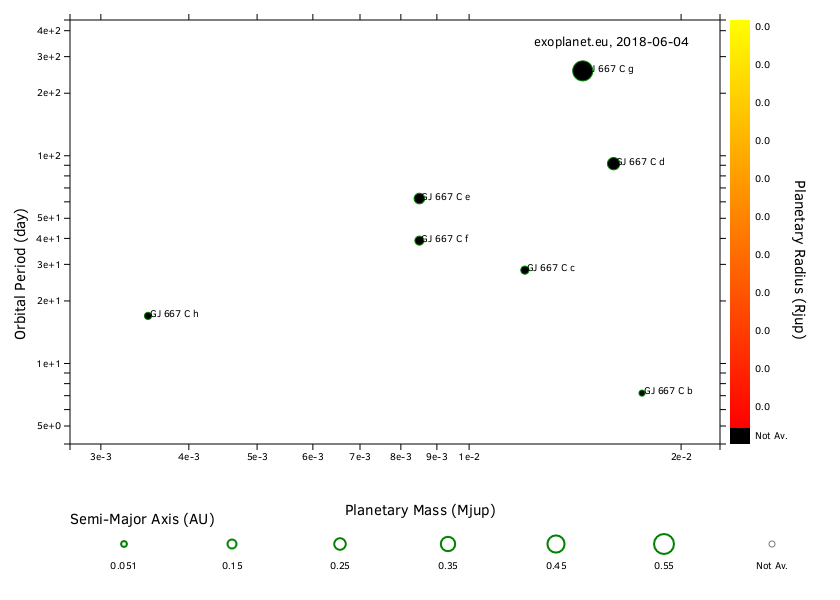 Use the search bar at the URL: http://exoplanet.eu/catalog/ for this result: 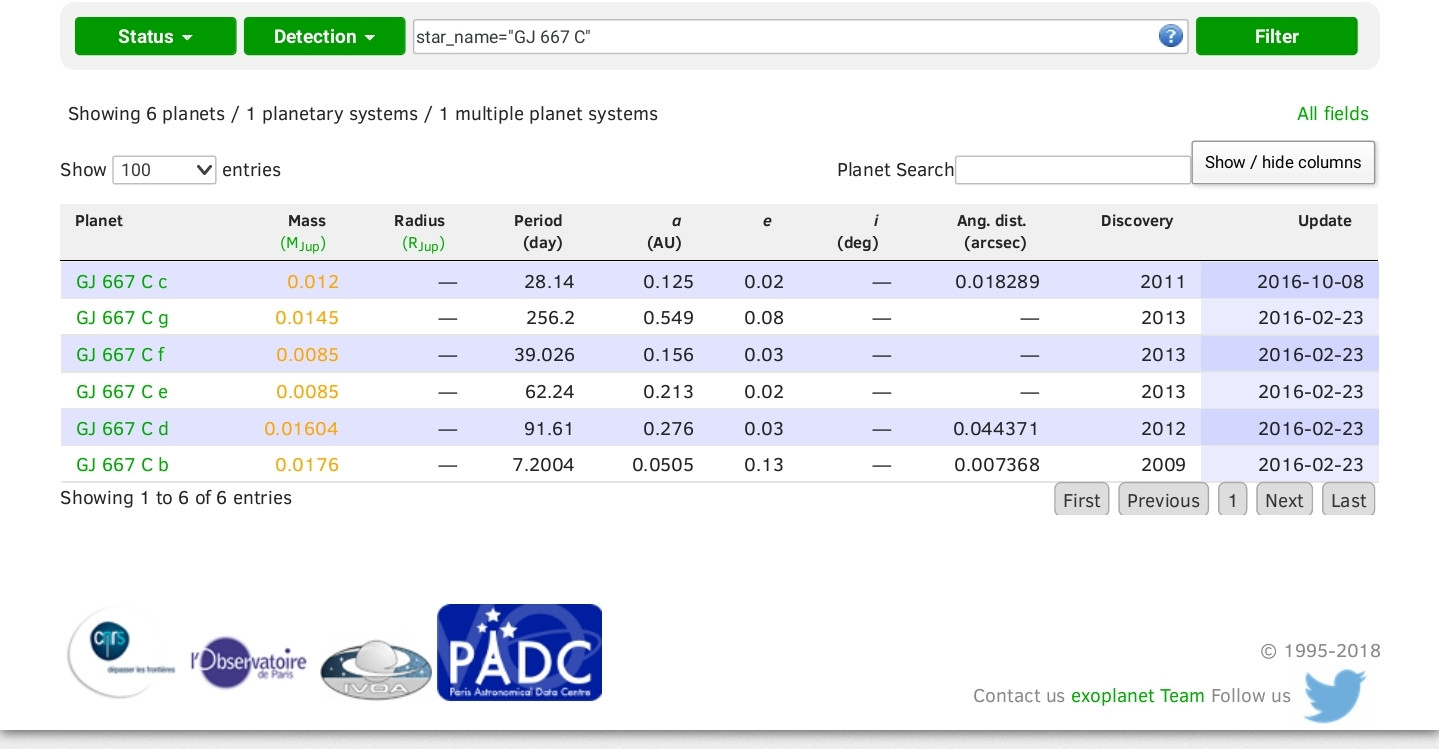 8
Sedna, VP113 and the likelihood of the PX/Tyche/Thelistos hypotheses
3
Why stars are named Gliese?
8
How does gradual crossing over of the Roche limit transform a planet or moon?
3
How is the mass and semimajor axis of a directly imaged exoplanet found?
2
TRAPPIST 1 and planet statistics?
0
Identifying cluster of exoplanets between Deneb and Vega
1
Incorrect best period fit over phase-folded data
3
What is the densest known exoplanet?