Why don't we have 2 Summers and 2 Winters?

As evident from the fact that that Venus has hotter environment than Mars due to their respective distances from the sun.

Why then Earth does not observe two winters (at farthest points) and two summers (at closest points)?

Additional Note: I know that Earth's seasonal climate change is caused by its 23 degrees tilt that causes the sunlight density variations for the hemispheres.

But to me this 5 million Km distance seems more relevant than the 23 degrees tilt.

There are a few incorrect assumptions in your post, so it is difficult to answer as asked. But I can address the misconceptions.

1. The seasons are not caused by our distance from the sun
The seasons are caused by the 23.5° tilt in Earth's axis. When the Northern Hemisphere is tilted towards the sun (summer), the Southern Hemisphere is simultaneously tilted away from the sun (winter). So the seasonal temperature difference has little to do with the Earth's position in its elliptical orbit. Without this tilt, there would be no seasons and the temperature day to day across the globe would be relatively uniform.

2. Even the GLOBAL temperature is NOT consistent with our change in distance
As a matter of fact, the average temperature of the Earth globally is hottest when it is the furthest from the sun — hotter by about 2.3°C (ref). That's because there is a lot more landmass in the Northern Hemisphere facing the sun (when Earth is farthest away in its orbit). So even though there is less intensity of sunlight, the land is able to be heated up much faster than the vast oceans which have to be heated at perihelion.

This distance-temperature inconsistency isn't unique to the Earth. Look at the average temperature of the other inner planets as we move away from the sun:

Venus is actually warmer than Mercury because of the thick carbon dioxide atmosphere causing runaway global warming. So it isn't simply the distance from the sun that determines the average temperature of a planet.

3. There's only ONE aphelion/perihelion
The closest point of the Earth's orbit (perihelion) and the farthest (aphelion) only happens once per year; not twice. That is because the elliptical orbit of the Earth is such so the sun is at one of the foci, not the center (as illustrated below). 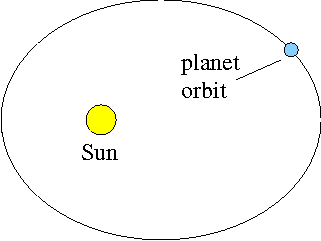 Note that the size of the bodies and the eccentricity of the orbits are greatly exagerated here.

But consider the variations from Earth's axial tilt, and here I will use the example of a location at 45 deg. latitude, similar to the latitudes of cities like New York, London, Berlin, Paris, etc. The first factor is day length. Axial tilt means that during Summer the day will be longer and during Winter the day will be shorter. At 45 deg. latitude this translates into the Sun being above the horizon for a full 15.5 hours on the Summer solstice, and only 8.7 hours during the Winter solstice. That's nearly a 2:1 difference in the number of daylight hours, which totally swamps a small 7% variation.

Additionally, the angle of the Sun in the winter is very low, which means that the amount of Sun falling on the ground is lower per area than if it were at a higher angle. On the Winter solstice at 45 deg. latitude the Sun's rays are diminished to 37% of their strength per square meter of ground compared to how strong they would shine directly above some location nearer the equator. But during the Summer solstice they are 97% as strong as they would be if they were directly overhead. Which is a 2.5:1 difference.

So here you have a combined total of roughly a 400% difference in the amount of light and heat shining down on a given patch of ground every day between the Winter and the Summer.

The other answers have said that the axial tilt is a more significant factor than the variation in distance from the Sun, but they haven't explained why.

The following is a rough back-of-the-envelope guesstimate.

The difference in illumination caused by the varying distance from the Sun can be computed from the ratio between the perihelion and aphelion distance, which is about a factor of 0.967. Applying the inverse square law indicates that amount of sunlight at aphelion is about 93.5% of what it is at perihelion. Reference: http://en.wikipedia.org/wiki/Perihelion#Planetary_perihelion_and_aphelion

In addition to that, the sun is lower in the sky during the winter than it is during the summer, meaning that a given amount of sunlight is spread over a larger area of the Earth's surface, which makes the ratio even larger.

There are two factors here. One is that the 23 degrees tilt is way more important than the tiny 5 million Km (remember that that's only 0.033 AU). Proof for that is that when it is Summer in the north it is winter in the south, regardless of the distance.

So you will note a variation in the weather conditions regarding this variables, so we have 2 winters and 2 summers, but 2 of them are just a transition state.
A proof of that, at the earth's poles, we can only have summer and winter because the limitation of variable (1).

We DO have 2 summers and two winters - and 2 springs and autumns too. The varying distance between the sun and earth does not cause the seasons. They are caused by the tilt of the Earth towards the sun in summer and away from the sun in winter.

The northern and southern hemispheres both have the same seasons, but at opposite times of the year.
For example, when it is winter in the United States, it is summer in Argentina and vice versa.

Since the seasons in the northern and southern hemispheres occur at opposite times of the year, it means that there are 2 of each season or 8 distinct seasons each year, including 2 separate summers and 2 separate winters.

Not the answer you're looking for? Browse other questions tagged orbit earth climate .

2
Is the eccentricity of a planets orbit relevant to finding whether the distance between said planet and its host star determines seasons?

5
Why don't stars move in the night-sky as the moon does?
4
Why don't we feel the speed of earth moving
8
Why Earth does not have rings?
11
Why do galaxies have arms?
2
Calculating length of summer solstice day using tilt and latitude
2
Why don't all perseid meteors follow the same trajectory?
3
If the solar system is nearly flat, then why don't all the planets appear to lie on the same axis when viewed from earth?
2
Scholarly work on the gravitational disruption of a rocky planet by a close pass with another planet?
17
On Mars, why are the seasons "strongly amplified" in the southern hemisphere and masked in the northern hemisphere?