We need to figure if liquid water is present throughout a Mars year, and how long the planet has been at its current distance from Sun. That will give us the length of time that liquid water has been present.

We can then compare this with Earth's data to figure out how long life would have had to evolve and what state it may have reached. In particular would there have been enough time for humanoids to evolve?

Would the different composition of the atmosphere and surface gravity produce life that looks different to that on Earth today?

I don't think applying Earth data to Mars makes much sense, well, except perhaps at the very beginning. The reason I say that is that life on Earth took a long time to get what we might consider "interesting", for lack of a better word. 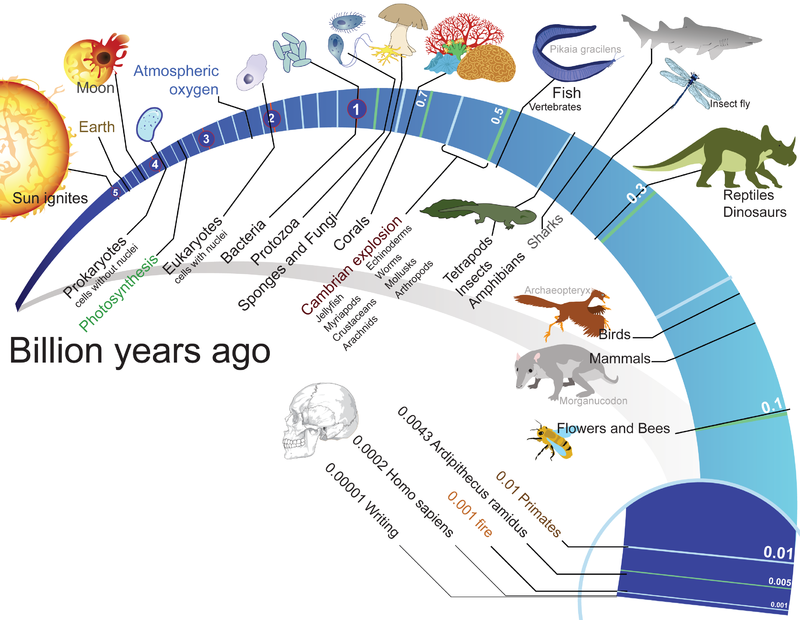 Source - and, OK, it's a children's book, but I like the picture.

So the Earth took 3 billion years to make - bacteria. Granted it's only one planet as a sample, but if that's standard, then, arguably, most of the life in the solar system might be 1 celled and, you know, kind of boring to you and me, though I'm sure scientists would love to study 1 celled organisms from other planets.

If planets need a few billion years before things like plants, fish, insects, etc, evolve, then many planets won't stay in the Goldilocks zone that long. . . . or, option B, maybe things happened slower on earth than other planets, but for now, we just don't know. Finding life on Mars or records of past life, if there was any, could help answer some of those questions.

Mars may have lost it's oceans fairly quickly, in less than a billion years. That's not a long time for life to evolve, at least based on the Earth Model.

Now, low gravity, probably not a big deal. Animals and trees on a low-G planet grow grow taller and thinner/weaker - thinner bones, smaller muscles for example. High-G, just the opposite. Shorter and stronger with thicker bones. Prior to lungs, Insect size is determined by Oxygen content in the atmosphere much more than gravity. (Fish-Fin size point removed as it probably wasn't correct).

Probably none of this happened on Mars cause I doubt life evolved that far but in theory on a low G planet you might get very large animals, perhaps the size of 10 story buildings, because size is a good evolutionary defense mechanism. (Fun to think about, right?)

Thin Air, that's a bigger problem cause thin air leads to evaporating oceans and once the oceans evaporate, life would have a hard time continuing the evolutionary process Life needs water, at least here on Earth. Life can adapt to living with small amounts of water but life needs water. In ice, primitive Life hibernates, but it doesn't continue to evolve.

Now it's possible that Mars' thinning atmosphere coincided with it cooling off and it could have had oceans frozen at the top but liquid below that for some time, while heat from inside the planet maintained liquid water and life was able to survive in that. This happened to the Earth, when the Earth was covered by ice during the snowball earth period and when Snowball Earth ended, the Cambrian explosion started. The problem on Mars was, if Mars had a snowball with liquid water below the ice period, it never ended. It never went back to liquid oceans and that's a problem for evolution.

It's possible that snowball earth (limiting the sunlight and atmospheric gases available to life inside the ocean) forced bacteria to evolve, hunting for food rather than simply absorbing it via sunlight and air, but that's just speculation on my part but the timing was pretty consistent. The Cambrian explosion followed snowball earth.

Humanoids on other planets (assuming we ever find any) would probably have characteristics adapted to that planet. We stand upright because our ancestors found it helpful to run. That might not be the case on other planets, perhaps that have thicker brush and no open planes. That's just one example, there's probably others. Our height likely developed out of the optimal height for hunting. If we just were gatherers and trappers, not spear throwers we might be quite a bit smaller with shorter arms cause there's be no evolutionary advantage to being bigger or longer arms if we climbed trees to get away from predators. You can clime trees higher if you're small for example and be safe that way. Humanoids might have tails on other planets if they had a use for them, like, impressing the opposite sex with them or for balance for tree swinging/jumping. There's a variety of possibilities that go way beyond gravity (which might just have an effect on body size and shape) or air pressure, which might affect things like wings for gliding, running (as thick air might reduce running speed) and lung size.

On red dwarf planets for example, plants and people might be significantly different colors. Plants might be blue or black, to absorb more red light, Animals, for example, might have colors into the Infra-red spectrum that we don't see. One blue sun planets, plants could be red and animals might have colors into the UV spectrum. (Some birds on earth have UV spectrum colors that we don't see but they do). Thicker air pressure might affect sound as well, they might talk much quieter perhaps higher pitch and have smaller vocal cords and smaller ears, where as, thinner air, bigger animals might make thunderous yells when they communicate.

There's a variety of possible factors. . . . hope I haven't gone too deep into speculation here, but speculation is fun sometimes.

Personally, I don't believe Mars ever came close to any of the ideas I mentioned above. I don't see how it could. it wasn't habitable for long enough.

Not the answer you're looking for? Browse other questions tagged mars life water or ask your own question.

12
Could Venus be a source of Earth's apparent overabundance of water?
34
Could any known, living organisms on Earth survive on Mars?
13
Where did Mars' water go?
5
Why are ice giants not considered suitable for life?
3
Why wouldn't massive torrents freeze on Mars?
4
Could a heavy exoplanet squeeze water into being liquid and 4° warm?