How many constellations in the Zodiac?

The astronomical zodiac contains a bunch of constellations along the ecliptic.

Some sources say there are 13 constellations in the astronomical zodiac. Other sources claim there are 12.

According to NASA (source):

If we count all the traditional constellations, there are 13 in the zodiac, not 12. So here are the dates (give or take one day each year) when the Sun is between Earth and each of these 13 constellations.)

There seems to be some confusion out there between zodiac constellations (in astronomy) and zodiac signs (in astrology). From the research I've done so far (including the quote above), it seems as though one of them (Ophiuchus) is a "recent addition", possibly due to the Earth's precession since ancient times (source).

What (officially?) are the constellations of the astronomical zodiac? Why do some sources list 12 and others list 13?

There are thirteen modern constellations in the Zodiac. In modern astronomy, a constellation is a specific area of the celestial sphere as defined by the International Astronomical Union. In total, there are 88 constellations.

Astronomy and Astrology are not the same thing. Astronomy is a science while Astrology is not. As such, I'll restrict myself to the historical and modern constellations of the Zodiac.

According to Encylopedia Brittanica

Zodiac (is) a belt around the heavens extending 9° on either side of the ecliptic, the plane of the earth’s orbit and of the sun’s apparent annual path.

In historical astronomy, the zodiac is a circle of twelve 30° divisions of celestial longitude that are centered upon the ecliptic, the apparent path of the Sun across the celestial sphere over the course of the year. Historically, each of these divisions were called signs and named after a constellation: Sagittarius, Capricornus, Aquarius, Pisces, Aries, Taurus, Gemini, Cancer, Leo, Virgo, Libra, and Scorpius.

In 1930, the International Astronomical Union defined the boundaries between the various constellations, under Eugène Delporte , who,

... drew his boundaries along vertical lines of right ascension and horizontal parallels of declination. One governing principle was that all variable stars with an established designation would remain in that constellation, as requested by the IAU’s Variable Stars committee. 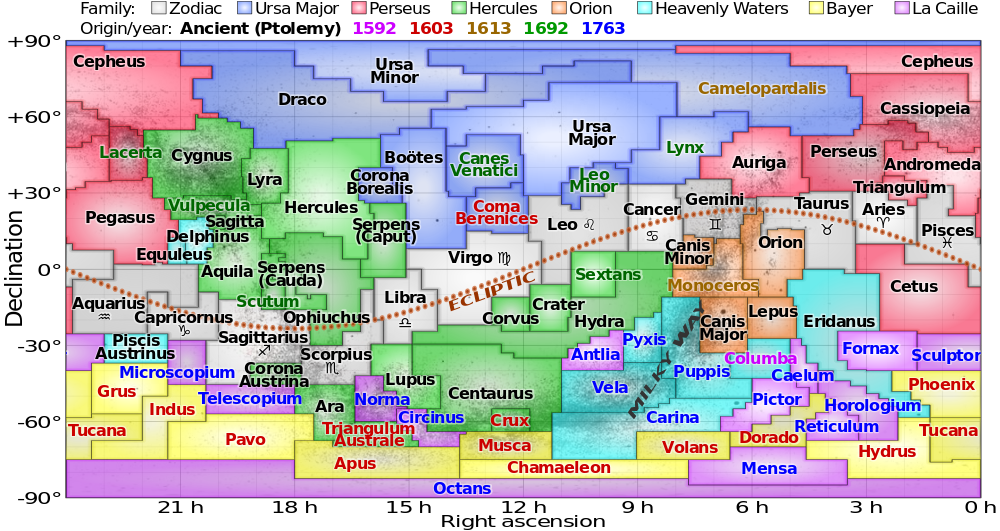 As a result, the path of the ecliptic now officially passes through thirteen constellations: the twelve traditional 'zodiac constellations' and Ophiuchus (which was one of the 48 constellations listed by the 2nd-century astronomer Ptolemy), the bottom part of which interjects between Scorpio and Sagittarius.

As seen from the (first) figure, the ecliptic also touches the edge of the constellation Cetus, though it in not usually included in the Zodiacal constellations.

Note about Precession: Because the Earth in inclined (by $23.45^{\circ}$), it rotates like a top. This is called precession, which results in a shift in the position of the constellations relative to us on Earth. The result is that the 'Signs of the Zodiac' are off by about one month.

The issue is the definition, as always. What is the Zodiac?

If you mean the zone where the sun stays in the sky during the year, a strip around the ecliptic, with current astronomical constellations, the solar path crosses 13 constellations. If you include the moon, Venus and the planets, the answer is 21 or 25, depending on the time scale.

Not the answer you're looking for? Browse other questions tagged history constellations terminology .

2
Which stars have been named after astronomers?
4
What constellations touch the 9-degree wide Zodiac?
1
Does the sun now 'bypass" some of the original zodiac constellations?
3
Numbers 80 to 85 in Ancient Astronomy
2
What are the "lines" in a constellation or asterism called?
2
Do Astronomers really never call Lagrangian points "libration points"?
23
When did people first measure that the Earth was closest to the Sun during January?
8
Explanation of an imaginary transformation occurring in the determination of trigonometric series for the elliptical equation of the center
3
On other planets, does the sun appear to pass through the same zodiac constellations?