Recently, I purchased a Chinese 8 inch reflector telescope from local store. When I observing stars and planets I've been having trouble getting really sharp image from this telescope. I observe Venus and Jupiter with several eyepieces but I got some "coma like" effect all the time with this telescope.

To improve the image quality I decided to collimate this telescope with my laser collimator and Cheshire collimators.

Before attaching the collimation device(s) I check primary and secondary mirror alignment through draw tube and it looks like this: 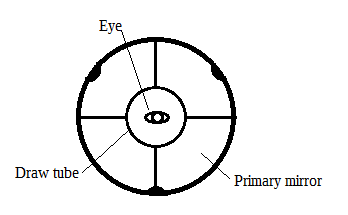 But when I test this setup with laser collimator it show vast miss-alignment in both primary and secondary mirrors. After aligning both secondary and primary mirrors I've got view similar to this through the draw tube: 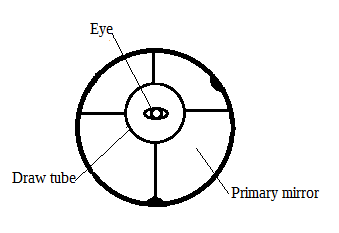 I also checked above setup with Venus and few starts and I didn't notice any improvements of the image.

I try to collimate this telescope with both Cheshire and laser collimator but still I didn't get any clear image with this telescope.

What was the "most likely" to have issue in this telescope?

Is a problem in draw-tube assembly alignment able to cause problem like this or does this happen because of the problem in primary / secondary mirror of this telescope?

Also, I tested this telescope with several branded and unbranded eyepieces and I didn't notice any improvement.

First off - good job for paying attention to collimation. For a newtonian telescope, it is as important as changing the oil on your car.

It would help to know a little bit more about the telescope. What make and model? What is the focal length?

Saw your comment below. It's an f/4 parabolic mirror, you're always going to have coma at the outer edge. But the center should be aberration-free if the scope is collimated.

Beware - it's an inexpensive scope, so depending on your luck some residual aberrations may remain even after perfect collimation. But that doesn't mean you should stop trying to collimate it. On the contrary, the better the collimation the better the performance, always.

I observe Venus and Jupiter with several eyepieces but I got some "coma like" effect all the time with this telescope.

If the image in the center is fairly good, but you get "coma like" effects at the edge, then that is indeed coma (perhaps mixed with other aberrations). It is normal at focal ratios of f/5 ... f/4 or faster. If the focal ratio is around f/6 ... f/8 or slower, coma is not so easily visible, or not visible at all.

But when I test this setup with laser collimator it show vast miss-alignment in both primary and secondary mirrors.

It is a very common issue with cheap laser "collimators" that the collimator itself is miscollimated. The laser only helps if it is very precisely centered, otherwise it is misleading. Unfortunately, many, many commercial lasers are woefully off-axis.

Plug the laser into the focuser. Tighten the screw only a little bit, so that the laser is sitting there semi-snugly, but you can still turn it around its own axis (rotate it in place in the focuser). Fire up the laser. Now gently turn the laser around, while watching the laser spot on the primary. What does the spot do?

(Ok, some lasers can be adjusted, provided they have the 2 or 3 adjustment screws on the collar, on the lateral part of the laser tube. Sometimes the screws are hidden under a plastic or metal ring. If that's the case, try and rescue the laser by carefully adjusting those screws. Otherwise dispose of the laser, or destroy it, since it's misleading.)

Other things to try

See if you can get better results with the Cheshire only.

Try and make a very simple collimation cap. It's basically a plastic cap with a tiny hole in the exact center, that's all. The procedure for using it is explained here:

If you're patient, you could collimate by the stars. It's complex and time-consuming, but it's guaranteed to be 100% accurate. It is always a good idea to use a quick star test at the end of whatever other collimation procedure you use - think of it as a reality check. The laser may or may not work properly, but the stars never lie.

Laser collimators can be very good and very quick - provided they are centered very precisely from factory. I use Howie Glatter's collimators, but they are not cheap. If you could borrow a Glatter collimator it would show you what's really going on.

(Always use a donut shape to center the primary, instead of a solid dot. The donut allows you to use laser collimators, unlike the solid dot markers.)

More thoughts on collimation below. These articles are written by very experienced amateur astronomers and telescope makers. Highly recommended to read these before you begin.

Try something simple (like the collimation cap) before you open up the scope and do "major surgery" on it. Then do a star test. Does it look pretty good on the stars? Then you're probably doing something right. The stars are looking pretty bad no matter what? Then perhaps you need to open up the scope, re-center the primary, check if the mirrors are sitting properly in their cells, etc.

If you use too much magnification, the image will not look very sharp, no matter what. Stay within 100x ... 200x while testing. It is pretty rare that atmospheric conditions and/or the quality of mass-produced optics allow good performance above 250x.

Always check the results in the center of the image. With most mass-produced optics, performance degrades at the edge, and there's not much you can do about it (other than replacing them with better optics).

Before you do anything, take the scope outside and let it "breathe" for 30 ... 60 minutes. After it reaches ambient temperature, its performance might get better. More details here:

Not the answer you're looking for? Browse other questions tagged telescope optics newtonian-telescope collimation .

2
Collimating with a home-made collimation cap

22
How can I collimate a dobsonian telescope with a laser collimator?
8
How can I accurately find & apply the white donut to the center of my mirror?
5
Is it possible to steer the sight of a Liquid Mirror Telescope using a plain mirror scheme? If yes, why hasn't it been done?
1
What telescope is this, and how does it work?
1
Laser Collimator producing oval not circle on the Primary
2
Collimating with a home-made collimation cap
2
collimating AstroMaster 114
6
Will the James Webb Space Telescope need re-alignment of primary mirror segments?