The falling star or shooting star has nothing to do with a star. If shooting stars were actual stars, we'll be burning in their atmosphere, rather than the other way around.

When a meteoroid, comet or (small) asteroid (or space debris in some cases) enters the Earth's atmosphere at high speed (typically in excess of 20 km/s), aerodynamic heating produces a streak of light, both from the glowing object and the trail of glowing particles that it leaves in its wake. This is called a meteor or shooting star (or a falling star).

In general, the meteors travel in a (approximately) straight path. We usually see only the large ones travel down towards the horizon while the small ones are burnt up long before that (giving the impression of coming from the horizon).

Image from Meteors? Even More Remarkable by Bruce Maccabee at brumac.8k.com

Consider the meteor path in the image above. it can be seen that,

This can be seen clearly in case of meteor showers which appear to radiate from a point. 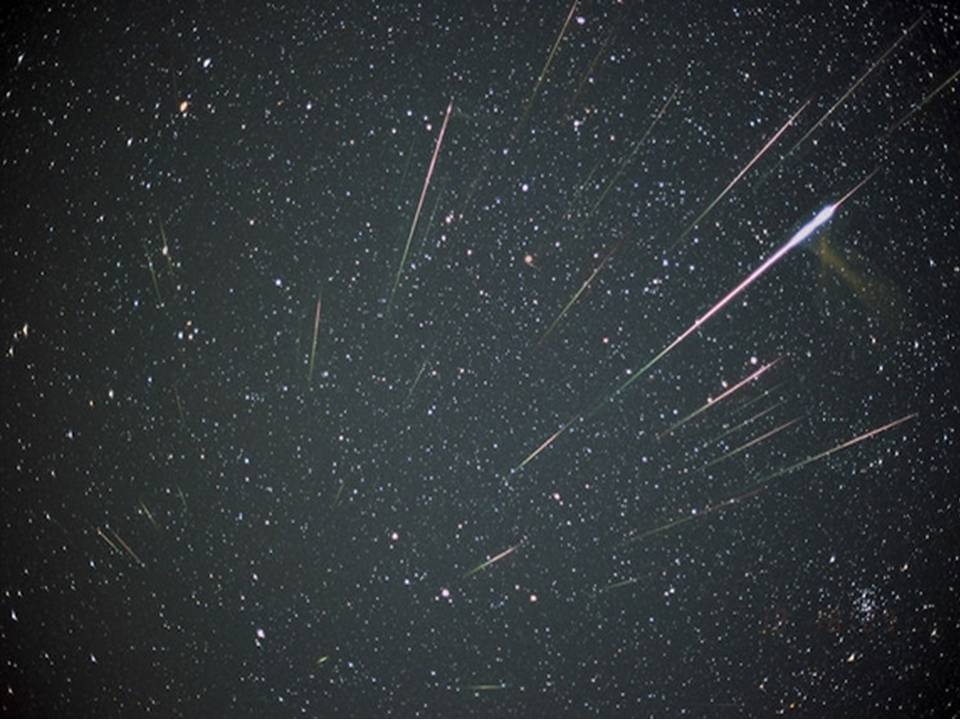 Image from Lyrids Meteor Shower 2014 by Steve Owens at darkskydiary.wordpress.com

Here, the meteors appear to come away from the (radiant, which is above the) horizon.

Had to think about this one a bit, cause, I'm not really sure what you mean. I've watched meteors and they appear to streak across the sky, not exactly towards the horizon and only the occasional larger one will actually approach the horizon.

But meteors can approach the earth from pretty much any angle, but generally towards the earth. Some, at the right angle, can skip off the atmosphere but in order to see them, they need to fall into the earth. What this means is, at the birth of the visual travels across the sky, the meteor is usually further from the Earth's surface than it is at the end of it's visual travels across the sky. Being closer to the Earth it's more likely to be nearer the horizon, so it's more likely a meteor will end closer to the horizon than it will begin, but it's not automatic. A meteor could enter the sky 60-80 miles east of you for example and burn up above you and give the opposite impression, traveling horizon to center of the sky where it burns up.

This one is kind of silly, and could have been answered with a 2 second google search, but yes, falling stars aren't really falling stars or even pieces of stars. They're mostly space dust, the majority being (I read once) remains of tails of comets though they can be debris from asteroid collisions or even older space dust that's been around for a long time. Usually tiny grains like sand, sometimes larger, but because they travel so fast they glow white hot and can make the air ahead of them glow white hot and from our perspective they look a lot like stars - tiny white points of light. Needless to say, they're not star like at all from any point of view other than how they appear to our eyes.

Not the answer you're looking for? Browse other questions tagged space or ask your own question.

6
At what size do objects burn up in the atmosphere when falling from orbit?
5
Why when we look through a telescope in space, do the billions of stars not block our view from seeing further?
3
Can some stars not emit any energy in the visible spectrum?
2
Is the shape of observable universe and shape of space same?
21
In a planetary system close to the galactic core, would it be possible to see the supermassive black hole?
14
Why are there no stars visible in cislunar space?