What is the exact definition of a "continuum-subtracted spectrum", such that one finds in SDSS spectra?

Is there a definition somewhere? Thanks

A spectrum of, say, a star or a galaxy, consists of wavelengths emitted from various physical processes. In the case of the star, there is the blackbody spectrum that reflects the temperature of all of its gas, whether it is hydrogen, helium, or metals. On top of this, there are lines, i.e. emission from certain atomic transitions that are excited and then de-excite emitting photons in a very narrow wavelength interval. The blackbody spectrum is said to comprise the continuum of the total spectrum.

In the case of galaxies, the continuum consists of the combined spectrum of many different stars' different blackbody spectra, infrared light from dust, etc. On top of this, there are lines, e.g. from nebular processes such as my favorite line Lyman $\alpha$, which is emitted when hard UV radiation from hot O and B stars ionize their surrounding neutral hydrogen, which subsequently recombines emitting mostly Lyman $\alpha$.

If we want to measure the total flux in a given line, we are usually only interested in the flux that comes from a particular physical process, and not the part of the flux that comes from the "underlying" sources which contribute to the continuum. Hence, we need to subtract the continuum. This is usually done by fitting some functional form to the continuum (e.g. a straight line or a second order polynomial), substract this fit from the spectrum, and finally integrate from one side of the line to the other in the resulting "continuum-subtracted spectrum".

In the top figure below, the total spectrum's flux density$^\dagger$ is in black, and the fit is the red lines. Underneath is drawn the continuum-subtracted spectrum, and a few dashed green lines show some lines that rise above the continuum. The integrated line flux is indicated by light red. 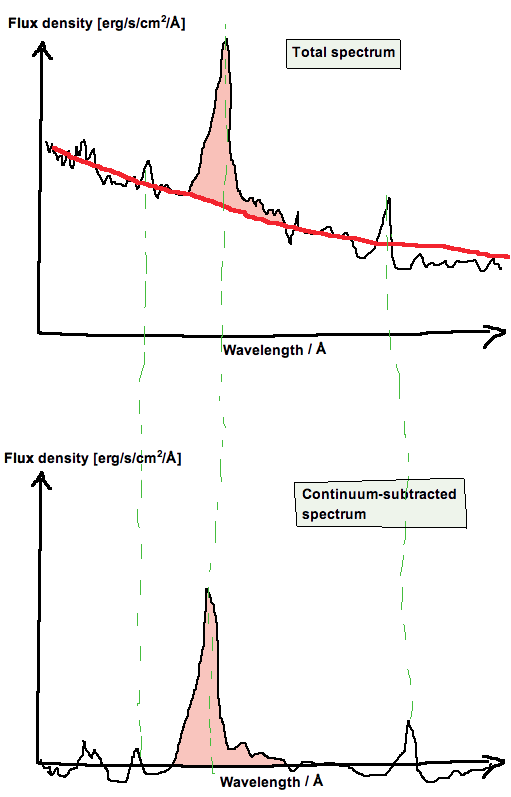 Not the answer you're looking for? Browse other questions tagged spectra sky-survey or ask your own question.

13
How to detect emission lines in optical spectra?
3
Broadband spectrum of Sun
3
How do we know which elements are in a galaxy spectra?
2
In what manner is the spectrum of a black body really a continuum?
0
Extraction of error spectrum in Sloan Digital Sky Survey
3
Is there a far away probe that has recorded the light spectrum from Earth as if it were an exoplanet?
2
Where can I find a good solar irradiance chart for the infrared?
1
How to isolate H$_\alpha$ from Nitrogen doublet emission lines