Questions about terminology used for Mars and its moons

I am having difficulty with some terminology:

Deimos is, like our own moon, tidally locked to Mars, so one hemisphere of Deimos faces the planet, and the faces away. The Sub-Martian hemisphere faces Mars.

Since Deimos is locked, there is a point on its surface that always faces in the direction of orbital motion, that point is the leading apex. It is an apex in the sense of a "leading point"

A meridian is a line of longitude, running from the North to the South pole. One of Deimos's meridians goes through the centre of its hemisphere that faces away from Mars, this is the anti-Mars Meridian. As you say, the "meridian on the side of Deimos facing away from Mars.

The image here shows a map of Deimos: 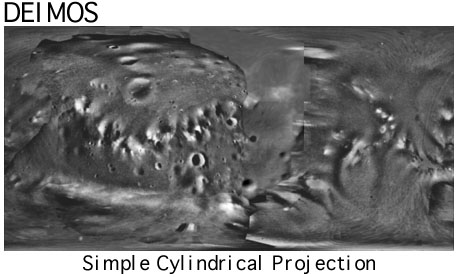 The leading face is the left side of the image, and the trailing face is on the right. The central 50% is the sub-martian hemisphere and the anti mars meridian is the line on the left and right edge, where the 3D image of Deimos has been cut to make a 2D map

Not the answer you're looking for? Browse other questions tagged planet fundamental-astronomy terminology observational-astronomy .