According to the first paragraph of the Noon Wikipedia page, solar noon is the moment when the Sun crosses the meridian and is at its highest elevation in the sky. The wording there suggests that there is an exact identity between the solar meridian crossing time and the solar maximum elevation time on a given day. However, later in same article in the Solar Noon section it states that,

Solar noon is the moment when the Sun transits the celestial meridian – roughly the time when it is highest above the horizon on that day.

The use of the word "roughly" really surprised me. I was strongly under the impression that these times were necessarily equal for sub-polar regions. Am I wrong and missing something, or is the wiki article just poorly worded?

Lastly, there is the altitude/azimuth coordinate system which locked to the observer. The zenith (the point at which all horizons are equidistant from the point you are looking at) is $+90^{\circ}$ in altitude and is a degenerate point in azimuth, and all horizons are $0^{\circ}$ altitude but lay on a unique azimuthal arc stemming from the zenith and intersecting the horizon. 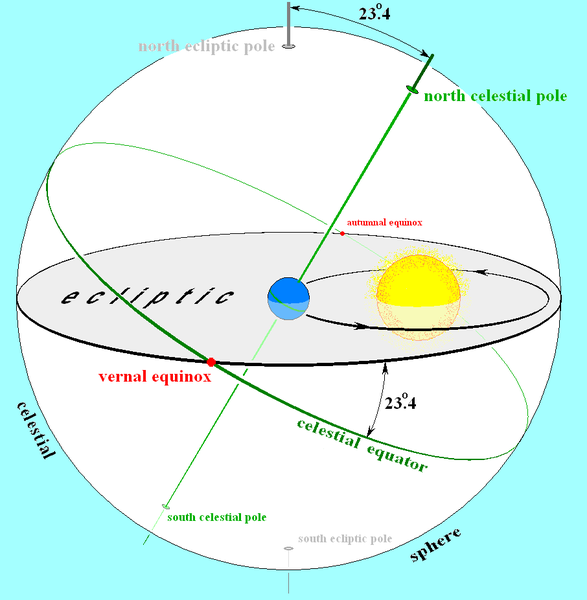 Why does all of this matter for the question you've asked? It's because as you look due East and due West, you're looking at $0^{\circ}$ declination (the celestial equator intersects the horizon at exactly due East and due West) whereas the ecliptic intersects the horizon at different points. These points change throughout the year as the relative position of the ecliptic changes with respect to the celestial equator. Now, the amount the sun travels on the ecliptic over a 24 hour period is $0.9856^{\circ}$ ($360^{\circ}/365.25 \text{ days}$; actually I may want to use a sidereal day here but nonetheless it's about a degree).

All told, I don't personally know how to quantify the extra bit of altitude the sun may gain from the misalignment of the ecliptic with lines of constant altitude and from the sun's motion along the ecliptic, but I would welcome references and calculations from other people. This little bit extra may not be a really small number. In other words, you might want to see how the rate of change of altitude of the sun at that point changes simply due to the Earth's rotation and how it may compare to the rate of change of altitude due to the motion of the sun along the ecliptic.

EDIT: I also just looked to see what the ecliptic looks like on the sky (as seen from Philadelphia), and how it compares to the local alt/az coordinate system. Below is a picture with all coordinate systems present to try to illustrate the point I was trying to make. 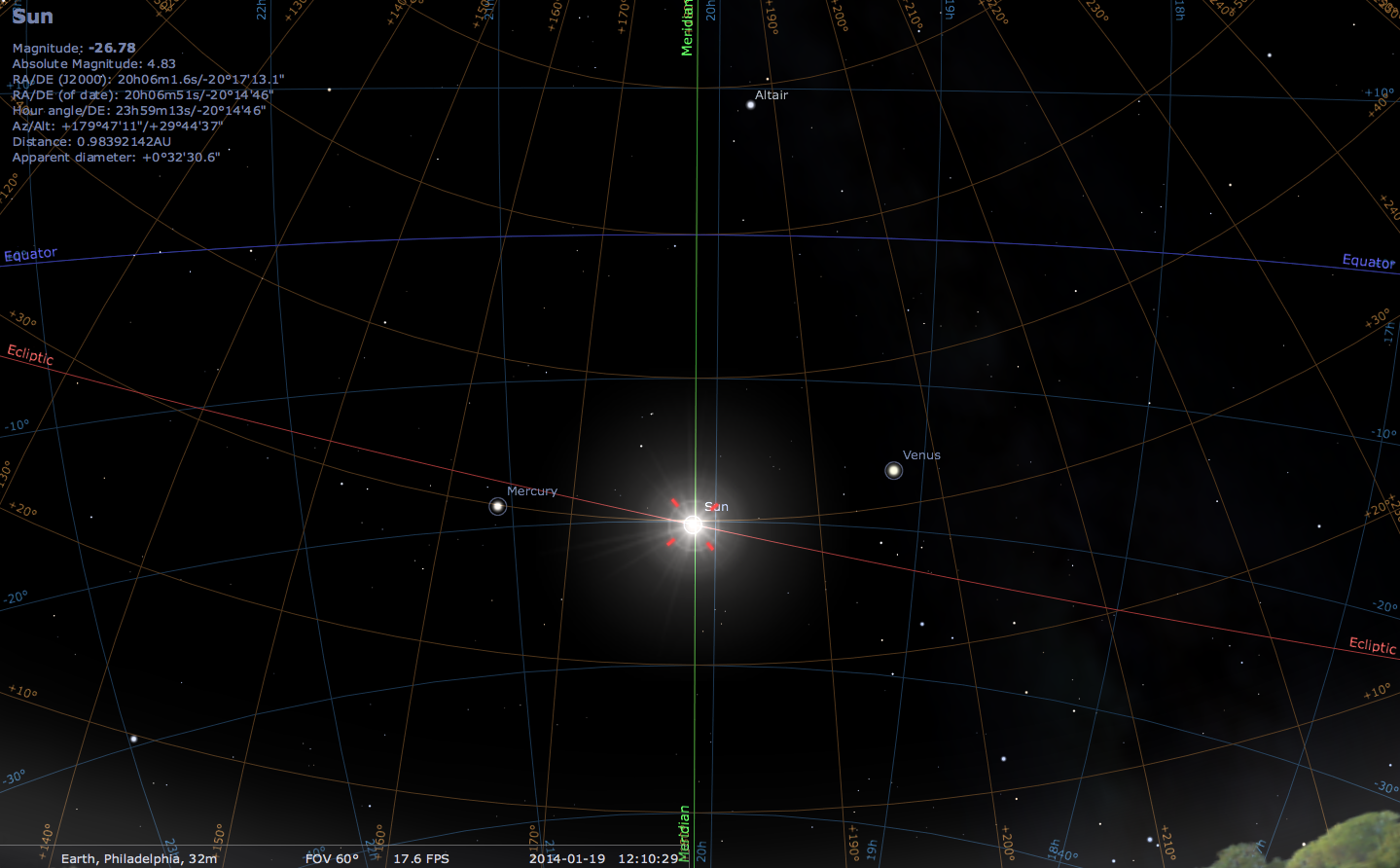 The green line is the meridian, the orange(ish) lines are alt/az coordiantes, the blue line is the celestial equator, and the red line is the path of the ecliptic. Hopefully you can make this out sufficiently well.

Not the answer you're looking for? Browse other questions tagged the-sun observational-astronomy .

20
Could someone explain RA/dec in simple terms?
15
How long does a sunrise or sunset take?
0
Term for altitude of the sun?

1
Solar maximum and minimum
1
Local Standard Time Meridian - LSTM (Units)
0
Solar Elevation Angles -- Anomaly?
3
Is there a name for the maximum in local solar elevation angle?
2
What time and where on earth is the latest solar noon?
3
Getting Solar Noon from Sunset and Sunrise
3
Will time that moon crosses meridian always be periodic?
6
Local mean time & Solar Noon
0
Do we get shortest shadow of any object at Solstice time or Meridian time?