In the far future the Milky Way and Andromeda will collide. As far I know direct collision between large dense objects (black holes, stars, planets, etc.) is unlikely due to the relative "low density" of both galaxies. My naive intuition is it's like two big clouds of dust merging.

I know at the collision time the Sun will be most like a red star and Earth a scorched dead planet. For the sake of the next questions let's hypothesise another system with a star resembling the Sun and another small beautiful third rocky blue planet holding some advanced live form. Also, for acceleration measures, let's use a frame of reference like if someone is observing from far away both galaxies getting close one to another and interacting.

Some questions pop up in my mind.

The short answer is no. There is no huge accelerations of star systems.

Look at a pair of interacting galaxies 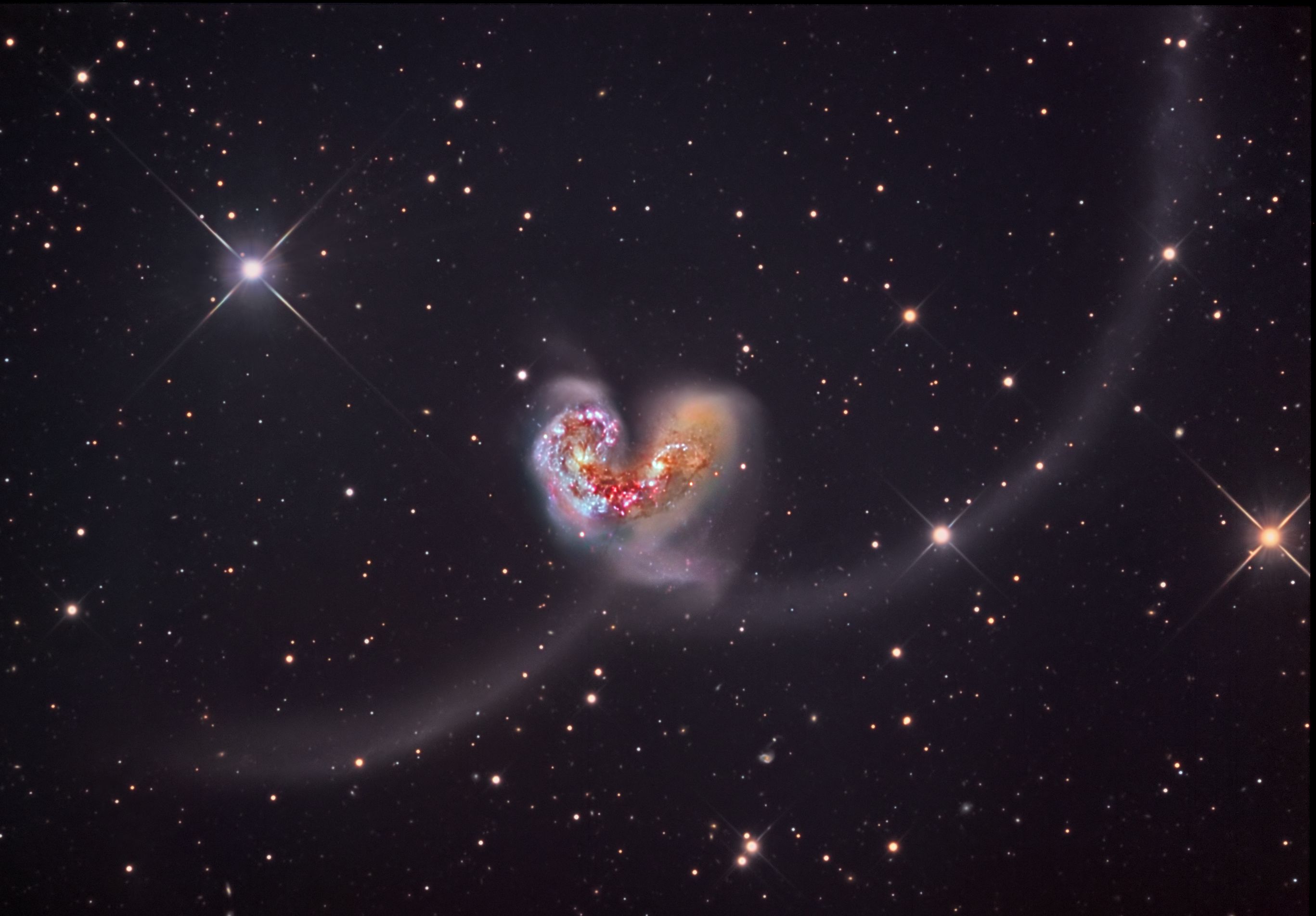 These are the Antenna galaxies (image copyright Star Shadows Remote Observatory and PROMPT/CTIO, from apod)

You will see the long "antennae", which are formed of stars which have been ejected from their galaxies by the interaction. But the accelerations needed are not large, because the interaction takes a long time. The acceleration nothing like $km/s^2$, The force required to accelerate a planet like that would smash it. remember 1$km/s^2$ is about 100g. But small accelerations over long periods can have big effects. The only way to cause objects to accelerate is to apply a force, and the only force that can move planets is gravity. A galaxy has a great big gravitational field, but it is very spread out, and as you note, most of the galaxy is empty space.

Planet orbits should be stable, certainly inner planets would remain bound to their stars. There could be disruption to oort clouds, but the gravitational field around a star would not change much. Similarly the star's magnetosphere would not be changed much. As above there are no large forces applied to stars or planets.

A close-ish approach, to 1 light year, would cause disruption of the oort cloud, but nothing more. Stars may have larger relative motions, but no where near enough to cause blue shifting of light into x-ray, in fact it would be hard for observers on the planet to tell which stars came from which galaxy. Andromeda is approching at 120km/s. But proper motions of stars in the milkyway can be greater than this, Barnards star has a relative velocity of 142km/s

At the end of the interaction, the star and its planet is likely to be scattered to the halo of an elliptical galaxy.

Some questions pop up in my mind.

Can the gravitational interaction sling shot an entire stellar system? How much Km/s2 we can expect these system to accelerate? (In a most extreme plausible case). 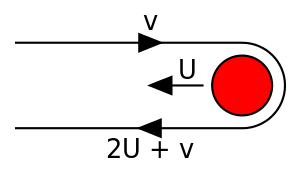 I agree with James Kiflinger. Reaching galactic escape velocity is very unlikely because galaxies have large dark matter halos where most of the mass is contained and to actually escape all that requires a very high velocity. The vast vast vast, even with spiral arms extending outwards, still, most of the stars would stay in the gravitaitonal control of the merged galaxies.

From this question 0ur Sun orbits the center of the Milky way at 220 km/s and it's escape velocity 537 km/s so it would need an acceleration of 317 km/s to escape the Milky way. That kind of acceleration is possible given that Andromeda and Milky way will fly towards each other at something like escape velocity speed (537 km/s) - perhaps a bit more as Andromeda is larger, and there's orbital speed (similarish to our sun's 220 km/s), so there's enough velocity to kick a star out if the gravity assist is positioned just right, but you'd need a very heavy star, as a star the mass of our sun simply couldn't effect another star the mass of our sun if they fly past each other at several hundred km/s - the gravitational bend would be much less than 180 degrees, so you'd really need a very large sun, maybe a few dozen solar masses traveling at high speed to (maybe) kick another star out of the combined galaxy. Such an even would be hugely rare but theoretically possible. Now, an individual star could get multiple gravity assists, but 2 stars getting close enough for a good gravity assist would be rare enough, so that, a star actually being ejected, while it could happen, would be very rare. Certainly billions of stars per galaxy it could happen to a significant number of stars, but it would still be a 1 in a million (so to speak) event.

How this acceleration can affect the system? Can it de-stabilise planet orbits for example?

First things first, accelerations are rare. For a star to accelerate around another star they need to get quite close and in such a scenario, the first thing you'd notice is there would be a 2nd sun in the sky, growing gradually brighter.

Even when Andromeda & the Milky Way collide, form the point of view of your average star, it wouldn't be very interesting unless you actually saw Andromeda's galactic core move towards you - then it might look cool but mostly it would just look like a bunch of stars - like we see in the sky today. The average closest distance between stars in our neck of the woods is maybe about 5-6 light years. In the center of the galaxy, less, but there's still a lot lot lot of space between stars, so even as Andromeda and Milky-way collide into each other, from one stars perspective, most of the time, all the stars would be quite distant and another star passing as close as 1 lightyear would be very rare - like maybe every million years or so, rare.

If our sun was to pass another similar star about 1 light year away, it would be bright in the sky but otherwise the effect would be negligible unless the star was very large.

For a sun like star to have the gravitational effect on Earth that Jupiter has (Jupiter is 4 AU from Earth at closest pass, our sun 1047 times the mass of Jupiter), 32 times further, about 128 AU, which is a teeny/tiny fraction of 1 light year, about 1/470. Even 100 solar masses, such a star would have to pass within 1/47th of a light-year to have the gravitational tug on Earth that Jupiter has. That's crazy-close and would be enormously rare. It would happen to some stars, but your average individual solar-system with life on it would on average not be effected in that way.

Luminosity could be more likely a factor than gravity, as a sun with 100 solar masses would be about a million times as luminous as our sun, and 1 million solar luminosity, to equal the solar output from our sun it would only need to pass within 1,000 AU or 1/60th of a light-year, and a sun that bright would put out lots of UV light. But even so, fly-bys that close would be very rare, but we would still be more likely to be cooked by a large star than orbitally perturbed by one. Smaller stars would need to fly much closer to have an effect, but smaller stars are also much more common.

Outer planets would be more vulnerable and oort cloud objects even more so, to near fly-bys and orbital perturbations, but again, that kind of near fly-by wouldn't happen often.

How it can affect life? Can it affect magnetosphere? change it's shape? Can solar flares/wind get stronger in some path due particles acceleration?

As stated, 2 stars would have to get unusually close for there to be any effect at all. The most likely any effect would be interactions between the two stars oort cloud, possibly leading to a big increase in comet collisions, which in and of itself could be pretty devastating when a good sized comet hits a planet. Such events would still be rare, but rather than every few million years, it might be every few thousand (ballpark guess).

Magnetosphere, doubtful. If a star gets close enough to affect a planet's magnetosphere, the planet would be vaporized.

Solar wind/solar flares - also, no measurable effect. A sun's solar flares are internally driven and not changed by objects flying past, especially at the distance of 2 stars even in a close flyby.

If another star passes really near (let's say 1 light year at closest approach) but at great speed can its light reach that planet at high energy levels, let's say x-ray and affect that planet life?

Again, no measurable effect. With the colliding of 2 galaxies you might see stars fly by each other at about 1000 km/s but that's nowhere close to enough velocity to create any kind of blue-shifted x-ray effect. Other than the night sky changing more rapidly over centuries than usual, there's no effect to stars flying past each other at 1000 km/s.

Mostly, there would be little to worry about. Star on star dangerously close fly-bys would be rare, even in a galaxy on galaxy collision.

17
How many galaxies have been discovered?
19
Why are galaxies disk shaped?
4
Do galaxies have a preferred orientation?
2
Classification of Active Galaxies
2
Can a galaxy splits into multiple galaxies?
0
How probably is it that galaxies will extinguish?
3
Collision of Galaxies
0
Are Dwarf Galaxies a Subset of Galaxies?
30
What keeps galaxies together?