What is meant by matter distribution?

Frustratingly, I find this could be a very simplistic question and may leave me feeling a little stupid for asking it. But I have to ask this.

I was wondering if anyone knew exactly what this term means, or the specifics for each case?

I assume you are referring to the rotation curve of galaxies, i.e. the speed of matter (stars, gas clouds, etc.) as a function of its distance from the center. This speed will depend on the matter distribution, that is, how the galaxies' constituents are distributed throughout the galaxies.

If (almost) all of the mass $M$ were located in the center, then a star at a distance $R$ would have a speed $V = \sqrt{GM/R}$. This is called Keplerian rotation, because this is how planets in the Solar system move, which were described by Johannes Kepler. In this case, the mass inside a radius $R$ is (almost) constant, i.e. $M'(<R) = M$.

Most disk galaxies have a large concentration of visible mass in the center (the "bulge"), so one might think that Keplerian rotation would be a good description of the stars' speeds. But this is not what is observed. In fact, the speed is seen to rise steeply the first few kpc, and then stay constant out to distances where no light is detected. This will happen if the mass $M'(<R)$ inside $R$ increases with $R$, i.e. if the matter is distributed throughout the galaxy. This is one of several pieces of evidence that 1) there exists some matter that we cannot see, in addition to what we can see, 2) that this matter dominates the kinematics of the galaxies, and 3) that it resides in a halo that extends beyond the visible matter. We call it dark matter.

If in addition to a given matter distribution the distances between the individual parts are fixed, the object we are discussing would describe a solid body. Of course this can't be the case for a galaxy, but it will be the case for a rocky planet. In this case the velocity of a given point will depend linearly on its perpendicular distance to the axis of rotation, i.e. $V \propto R$.

Density profile of the matter distribution

Excactly how the matter is distributed in the galaxy is not easily deducted, and varies from galaxy type to galaxy type. An early description of the matter density as a function of distance from the center was the so-called NFW profile, but other models may be better, e.g. a Sérsic profile or an Einasto profile.

So, to summarize, the term "matter distribution" refers to density as a function of location, i.e. $\rho(\mathbf{r})$, for some object. This can be for any object — solid, liquid, gaseous, or consisting of several components that are held together by gravity — but in any case it is true that its form determines its rotation, and the three different rotation forms you mention are often discussed in the context of galaxies.

The three different cases are illustratred below. Keplerian, solid, and flat rotation are drawn in green, red, and blue, respectively. For comparison, a typical spiral galaxy velocity curve is drawn in magenta. 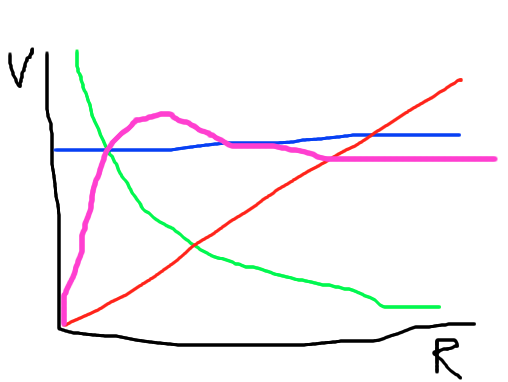 A distribution is a function mapping from one (or more) variables onto other (often a single, usually non-negative) variable(s). Generally, matter distribution is the relationship between location and mass density (sometimes averages over macroscopic distances, sometimes objects which are assumed to be point masses). Typically in astronomy the radial distance from some center point is the (most significant) independent variable. You should have some familiarity with euclidean, polar, conical, and spherical coordinate systems. Most 'well behaved' distributions → 0 as distance → ∞.

Not the answer you're looking for? Browse other questions tagged orbit galaxy rotation or ask your own question.

15
What is the evidence that galaxies rotate?
3
What is meant by "Radial Direction" of a galaxy?
18
Conventional matter to dark matter ratio, outside of galaxies
2
Is it true dark matter was discovered whilst looking at the rotational speed of galaxies?
3
Bimodal Galaxy Distribution
1
What is meant by sun's path through zodiac
0
How do we estimate the dimensions and mass distribution of a galaxy's dark matter halo, beyond the effective limits of its visible matter?
7
What observations show that galaxies are made of matter instead of anti-matter?