Why does the moon appear on cloudy night sky?

Now, I was looking the sky when I saw the Moon showing up in a sky completely cloudy, like this: 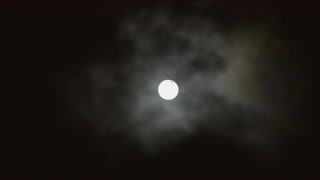 But a little different. The clouds were doing an eye shape. What does explain that phenomenon? Looks as if moonbeams drilled through the clouds!

Clouds are obviously not completely opaque, and what you are seeing is a break in the clouds. It is of course possible for the clouds to cover the moon, however, often the moon can shine brightly through the clouds and illuminate the clouds in some nice way.

This video might help in a visual way: https://www.youtube.com/watch?v=aLd_yhIWE48

That is called a corona. It is caused by diffraction of light by thin clouds with small but evenly sized particles. The best coronas show multiple coloured bands.

There is a similar, but unrelated, phenomenon, called a halo, which is caused by high altitude ice crystals with a regular hexagonal shape. It is much larger, 22 degrees wide.

Both these can be seen around the sun as well as the moon, and are fairly common, more common than rainbows (for example).

Not the answer you're looking for? Browse other questions tagged the-moon amateur-observing .

6
Why did the moon abruptly change positions in the sky?
3
From our world's perspective, does the full moon look larger in one city than it does in another?
5
Have I just observed a supernova?
7
Why can I see the dark side of the moon?
2
Why the moon is blinding me right now?
7
Why isn't the moon orange all the time?
5
Why does the Moon appear to be flat?