Is Jupiter just a super earth with hydrogen atmosphere?

Often I see books which state that Jupiter has a rocky core, if it is true, does it originate from super earth with excessive collection of hydrogen?

Does it originate from super earth with excessive collection of hydrogen?

Basically no, and this is why: 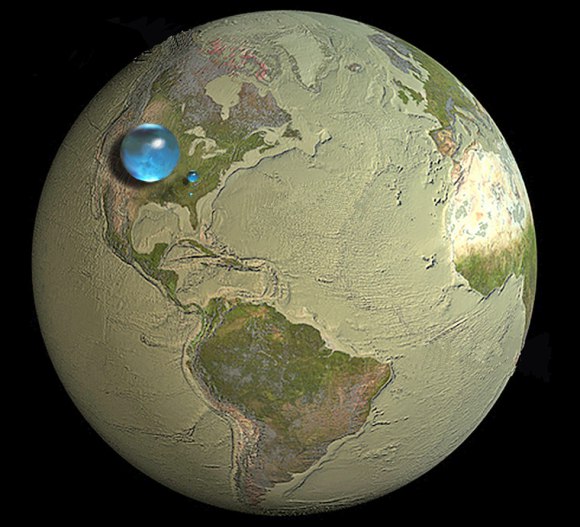 Source from the water article linked below.

Jupiter likely formed outside the frost-line, so it never had a rocky or even a molten magma surface. It formed with much too high a percentage of ices, which, under pressure, became hot gas and perhaps, at one time, a very deep ocean around the whole planet.

As Rob Jeffries said, the formation of Jupiter isn't well understood, so there's some uncertainty there, but I don't see how a planet that forms with as much water, CO2, NH3 and other gases as Jupiter did could ever form what we would consider a solid surface. It's large size and heat of formation probably kept it highly gaseous during it's entire formation. Perhaps it was once a water world of sorts, but my guess is it always resembled a gas giant once it was recognizable as a planet.

The Earth is about 0.02% water (some websites say 0.05% but whichever percentage, the Earth is still almost entirely Rocky Mantle & Metallic core. I don't think a planet that forms outside the frost line would ever become Earth like or a super-earth.

Inside the frost line, A super earth could in time become a gas giant, but outside, I don't think so.

That said, Jupiter might well have an earth like ratio of elements at it's core, but I don't believe that means it was ever a super-earth.

Jupiter probably originated with a dense core, and then accreted a gaseous envelope. To call the core "rocky" could be misnomer, since the planet formed much further out from the Sun where it may have been possible to form ices. The exact location of Jupiter's birth and the composition of its core are not known, but the composition was unlikely to have been the same as Earth. It is also probable (again, theory not fact), that Jupiter's core may have reached multiple Earth masses before accreting the gaseous envelope.

Not the answer you're looking for? Browse other questions tagged jupiter or ask your own question.

11
What will happen when landing on Jupiter?
8
Does Jupiter help to protect the Earth against comets/asteroids impacts?
2
Are the darker blue/black areas in this picture what the atmosphere of Jupiter looks like without clouds?
3
What would the pressure and temperature of gas be, right above Jupiter's gas/liquid boundary?
3
Helium rain inside metallic hydrogen within Jupiter, conditions and experiments?
7
Fate of Jupiter when our sun dies
15
During solar eclipses on Jupiter, can the moon(s)' shadow(s) on the surface be seen from Earth with a telescope?
11
Is it possible to see Callisto with the naked eye when it's at its greatest elongation from Jupiter?