What happens to oxygen produced on the Sun (or other stars)?

Through nuclear fusion, the Sun can (or at the very least, someday will) produce atoms of all elements up to and including oxygen. And in terrestrial chemistry at least, when you combine oxygen, hydrogen, and a small amount of heat you get water. Or lithium and oxygen and heat will produce lithium oxide. Those individual components are all readily available in a star like the Sun.

So my questions is, does the oxygen produced by the Sun (or any other star, now, in the future, or in the past) react chemically (for instance, through oxidation or combustion processes) with the other elements present in the star's atmosphere?

Or I suppose more generally, do the elements formed through nuclear fusion in a star chemically interact to produce more complex molecules (and if not, then why not)?

The Sun is a small main sequence star. It does not produce oxygen via fusion. It can't. The temperature and pressure in the Sun's core are too low. Fusion in the Sun is currently limited to production of helium. This will remain the case for several billion years.

That said, there is oxygen in the Sun, about 1% by mass. This oxygen was produced long ago by other stars at the end stages of their lives. Our Sun is a third generation (or more) star. Most of the Sun is far too hot for those oxygen atoms to combine chemically. One exception is sunspots, relatively cool areas on the Sun's photosphere. (Relatively cool means less than 4500 kelvins, so still quite hot.) Molecules can form at these lowish temperatures, and scientists do see signatures of many different molecules in the light coming from the Sun.


**Update, in response to edits to the question**

Molecules cannot form inside of a star. The temperatures are just too high. Molecules decompose (split apart) into their constituent parts at high temperatures. The Sun's photosphere is about 5800 kelvins, which is already too hot to sustain very many molecules. Temperature rises rapidly with increasing depth below the photosphere. The Sun's core temperature is about 15 million kelvins (27 million Fahrenheit), and the Sun is a small star. Larger stars have even higher core temperatures. At 15 million kelvins, there aren't even atoms, let alone molecules. There are instead atomic nuclei and electrons. Atoms are stripped of their electrons at those extreme temperatures.

In five to seven billion years, our Sun will have fused all of the hydrogen in the core into helium. That's when our Sun will become a red giant. Even then, it still will not produce oxygen. The first stage a one solar mass star experiences after leaving the main sequence is the red giant phase, where the core is an inert mass of helium surrounded by a shell of fusing hydrogen.

Eventually (after another billion years or so), the temperature of that helium core will rise to the point where the helium starts fusing into carbon, plus a little bit of oxygen via the first step on the alpha ladder. At this point, the Sun will leave the red giant phase and join the horizontal branch of the Hertzsprung–Russell diagram. This is a rather short-lived phase of a star's life. The carbon and oxygen produced by helium fusion quickly (in stellar timeframes) form an inert core. At that point, our sun will become an asymptotic red giant.

The red giant and asymptotic red giant phases are rather messy affairs, wracked by convulsions where the star expels lots of gas. Our Sun will lose about half its mass to such convulsions. Molecules do form when this expelled gas cools. This results in some of the prettiest pictures in astronomy, shown below. 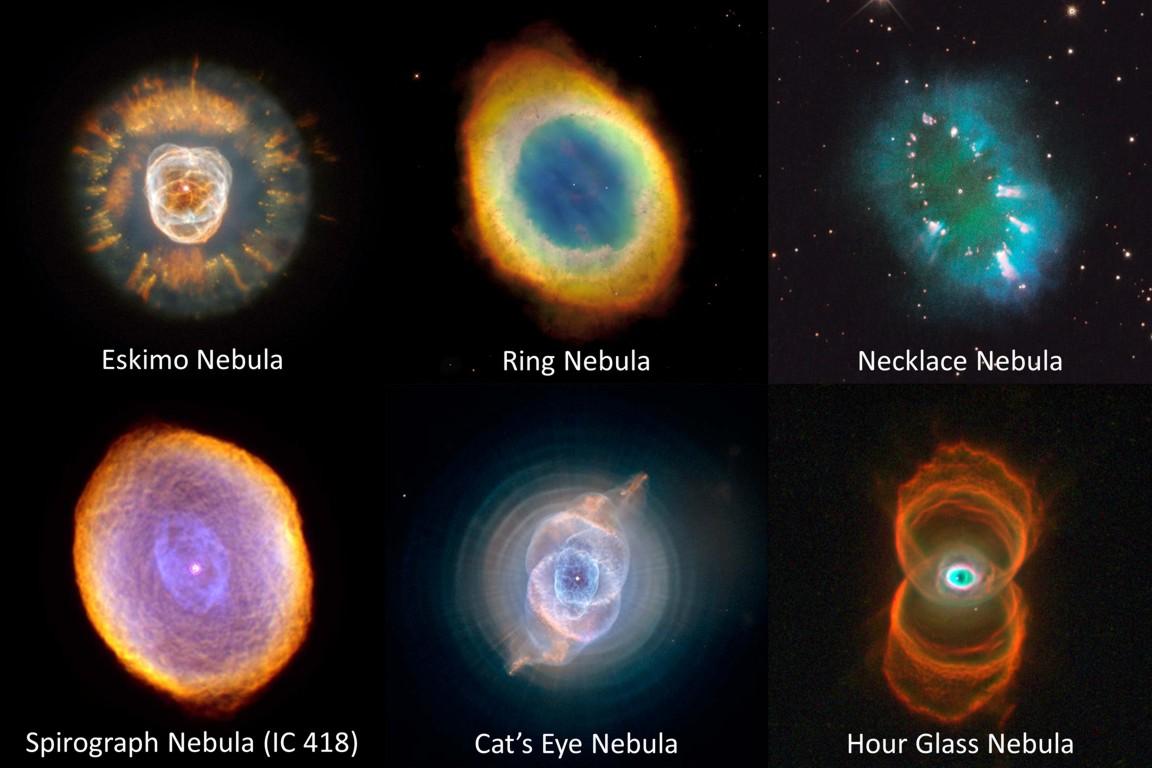 The answer is yes. Molecule formation is common in the outer photospheres of cool stars, and those molecules frequently contain oxygen. Obvious and common examples are TiO, VO.

This chemistry almost entirely happens when temperatures fall below 5000K, because otherwise the molecules are dissociated. Therefore it never occurs in stellar interiors.

The Sun will form molecules (involving O) in the later stages of its life, first in its atmosphere when it becomes a red giant (in small quantities). The oxygen in these molecules was not produced in the Sun, it was already there. More extensive molecule formation happens when it ascends the Asymptotic Giant Branch, prior to losing about half its envelope to thermal pulsations and a strong stellar wind. Here, some of the oxygen was made in a helium burning shell inside the Sun and transported to the surface by convective mixing.

Not the answer you're looking for? Browse other questions tagged the-sun stellar-evolution astrochemistry stellar-atmospheres or ask your own question.

11
How can the Sun burn without oxygen?
12
What is the reason for high lithium concentrations in Sun-like stars?
4
What is the air pressure in the heliosphere (Sun's atmosphere)?
3
Is the composition of stars in future made of more and more heavy elements?
33
What happens to the 99.9 % of the sun-rays that do not fall on any planets or any other celestial body?
2
Does the Sun have any atmosphere?
8
What does this "web on the surface of the Sun" image reflect? What does 789 nm show us?
19
Can lightning occur in stars like the Sun?
3
The sun "burns" hydrogen and even has "campfires" on it, but has anyone calculated a rate of actual chemical burning on the Sun?