If we were to see the Sun with our naked eyes from the Orion belt, would all planets be encompassed inside the star? Is this calculable?

When we see a star it looks much bigger in diameter to us than it really is, this picture (extracted from here) explains what I mean: 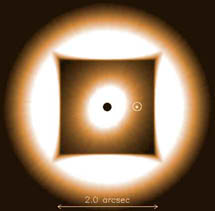 Notice that the point we see in the skynight, represented by the yellow outer circle, would actually encompass even planets orbiting the actual star, represented by the black dot in the center. In this case we see one planet inside the white circle.

My question is, can the effect of distance and brightness be measured as to know how far would we must be to watch a star that encompasses neptune?, the earth? or does it depend on different factors?

Such observations are possible, see Fomalhaut b. It depends mainly on the diameter of the objective of the telescope (diffraction limit) and contrast. Telescopes can (at least in theory) be combined to an effective telescope of larger diameter (aperture) by interferomentry. Masks can help to occult bright stars to overcome the contrast limitatios.

There are indirect methods to "see" faint planets, as e.g. applied in the Kepler mission, or by Gaia.

And yes, it is calculable. With naked eye we wouldn't be able to distinguish the sun from the planet orbits from a distance of about 1000 lightyears, as the orion belt stars: 1000 lightyears are about 300 parsec. This means, that the earth orbit would be about 1/300 arc second. The resolution of the human eye is about 4 arc minutes, the 72,000-fold. For Pluto it's still more than 1000-fold.

Not the answer you're looking for? Browse other questions tagged star the-sun observational-astronomy distances size or ask your own question.

22
At what distance from Earth would our Sun be the same apparent magnitude as the next brightest star in the sky?
7
How would light from a blue or red star affect the way we see?
0
Which star with a Bayer designation is the farthest from the Sun?
7
If a star were travelling at 99% of the speed of light, directly at Earth would we see it?
3
Information on Planetary nebula formed from the death of our star the 'Sun'!
13
Is it at all possible for the sun to revolve around as many barycenters as we have planets in our solar system?